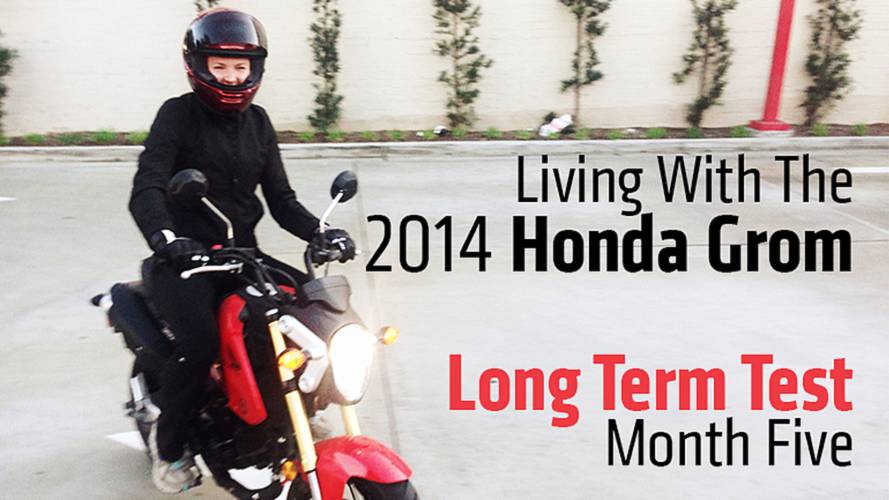 Never a dull moment for the little Grom.

The 2014 Honda Grom continues to lead an active life in our hands. When it’s not serving as my round-town transportation, it’s been busy putting a smile on RideApart contributor’s faces and, last weekend, I even used it to teach my girlfriend how to ride.

Honda Grom Gets Makeover for 2017

To recap, the Grom is a three-quarter-scale motorcycle built using the 125cc, four-stroke motor and four-speed gearbox from the Honda Wave. If you're not aware, the Wave is a scooter sold in Southeast Asia and one of Honda’s most high-volume models worldwide. It might only make 9 bhp, but it also weighs just 225 lbs with its 1.45 gallon tank full. That manual gearbox, the grippy tires and the decent suspension combine with the diminutive proportions and lightweight to make it a blast to ride at low speeds. It’s also cheap — just $3,199 — and we’re averaging about 85 mpg on ours, a little lower than the average reported by riders on Fuelly.

Or, if you’re new, an absolutely perfect bike to learn on. That’s because it’s utterly unintimidating — to look at, to sit on and to ride — even if you’ve never, ever ridden a motorcycle before. Unlike similarly proportioned scooters, it also has a standard motorcycle’s riding position, clutch and gearbox. With that equipment, new riders can learn the skills necessary to ride any bike.

New riders like my girlfriend Lara. Before Sunday, she’d only ever been on the back of a bike. But, after an hour or so on the Grom, she was confident enough to shrug off my guidance.

Lara on the 2014 Honda Grom in the backyard

We started with no-speed clutch drills in the safety (and privacy) of my front yard. Lara knows how to drive a manual transmission car, but the hand clutch on a motorcycle is essentially a new skill. So, after a brief bike walk around explaining the various controls and how you use them, we parked her in a corner and had her practice finding and modulating the clutch’s friction zone. Once she was confident with that, I had her put a helmet on and try pulling away for the 50-foot length of the yard. Paddling the bike backwards to the “starting line” helped her gain experience with the bike’s balance and in maneuvering it without the help of the engine. I had her leave the motor running and find neutral — another crucial, but often overlooked skill.

She surprised me with how quickly she picked it up so, even though we didn’t plan on it, we pushed the bike to the parking lot behind a local Chick-Fil-A — closed on Sundays — perfect for some car-free practice laps.

Lara on the 2014 Honda Grom in the parking lot

There, we started with some first gear loops just so she could actually feel what it was like to ride the bike a little bit. Then, before she got the confidence to go any faster, we talked about looking where you want to go and counter steering, also touching on the separate brakes and how to use them. It’s good that we had that brake talk because, soon after, a little too sudden application of the front brake was as close as she came to toppling over all day.

Next up, it was gearshifts. As you can see, this parking lot was pretty tiny so doing so wasn’t strictly necessary, but Lara was doing so well and having so much fun that I wanted her to pick up as much as possible during that short session. All we had room for was 1st and 2nd gear, but going up and down through those got her confident with the gearbox. The Grom’s is positive, but not Suzuki-slick, providing good feedback for a learner while allowing them to make some mistakes and see that doing so isn’t the end of the world.

Lara riding around the parking lot on the 2014 Honda Grom

We also made time to practice hill starts on what little incline the parking lot had (mostly on a gentle ramp). I showed Lara how to hold the bike using the front brake, then modulate its pressure along with the clutch to pull away smoothly. Again, the Grom’s lightweight and small size made it such a good learning tool that she nailed it on the second try.

Lara was so confident, in fact, that she opted to ride the bike the block back to my house rather than have me push it. Yeah, there’s no traffic on that little side road, but the very idea of potentially riding around cars is enough to scare most people off, so I was pretty proud that she suggested doing so.

You may be thinking to yourself that the Grom looks awfully small here. It’s actually larger than it looks in photos, and is much more of real bike than it may appear to be at first glance. Why? Because Lara is six-feet tall, which means my Aerostich Roadcrafter just about fits her. Next step is to zip her into its head-to-toe protection (we need to order one of her own), put her in real riding boots and go practice on some quiet neighborhood roads.

The next day, I told Sean MacDonald that Lara was learning to ride. His response? An excited, “That means she can comes on trips with us now!” The single nicest thing that’s ever come out of that guy’s mouth.