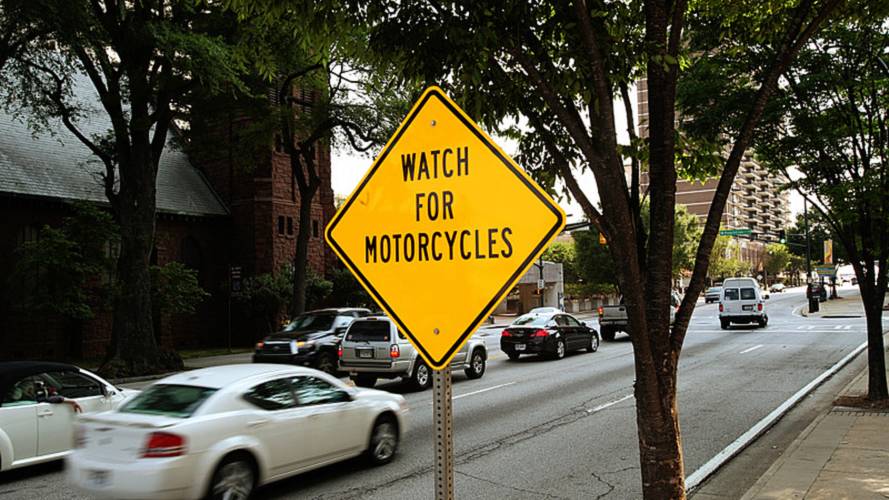 Can this new road sign that says. "Watch for Motorcycles" make the road safer for riders? We dive into the debate.

After two years of development, Allstate has come up with what, it thinks, is a sign that could make motorcycles safer. Installed permanently at the intersection of President and Pratt in Baltimore, this yellow diamond warns drivers to “Watch For Motorcycles.” Aiming for national standard signage, Allstate will expand the program through Maryland and may take it nationwide.

“The yellow, diamond-shaped warning sign was created following two years of development, which included more than 100 temporary installations in various U.S. cities between 2010 and 2011,” explains the insurance company. “The signs were designed to establish a standardized warning device that can be used by any local or state agency and would be recognizable to riders and motorists across the country.”

The NHTSA says that 46 percent of multi-vehicle accidents that result in fatalities for motorcyclists occur at intersections. In Maryland, nearly one-third of fatal motorcycle crashes occur at intersections, so these signs could actually do some good. To pick the location for this first and subsequent future signs in Baltimore, Allstate worked with the city’s Department of Transportation to identify particularly accident-prone locations.

Allstate is coordinating efforts with local governments to donate both the signs and installation, free of charge.

Can a simple warning sign have an impact on safety? Sadly, it appears as if the main benefit may be a PR one. 30 seconds in Google reveals research reports from Minnesota and Wisconsin that categorically refute the effectiveness of warning signs.

In a report entitled, “Effectiveness of Traffic Signs on Local Roads,” Minnesota concludes, “Traffic warning signs have a minimal or neutral effect on safety.”

In “Effectiveness of ‘Children at Play’ Warning Signs,” a loose equivalent to these motorcycle signs, Wisconsin concludes, “There is no evidence that special warning signs of this sort reduce driver speeds or crash rates.”

Why? “Such signs do not give clear and enforceable guidance to drivers, provide a false sense of security to parents and children that may increase risk, expose the government to liability, give the false impression that areas without such signs do not have children, represent an unnecessary cost that then propagates as additional signs are requested and violate the principle that signage should be based on engineering, not political, decision making.” Swap “motorcycle” into a few places above and draw your own conclusions.

In fact, multiple studies conducted in various European countries of the last decade have concluded that stripping roads of all warnings and markings, thereby forcing drivers to pay attention and think for themselves, is actually the clear route to increased safety. After stripping itself of all signage, lights ad lane markings, Drachten, Holland saw accidents drop from 9 to 10 a year to just two in two years.