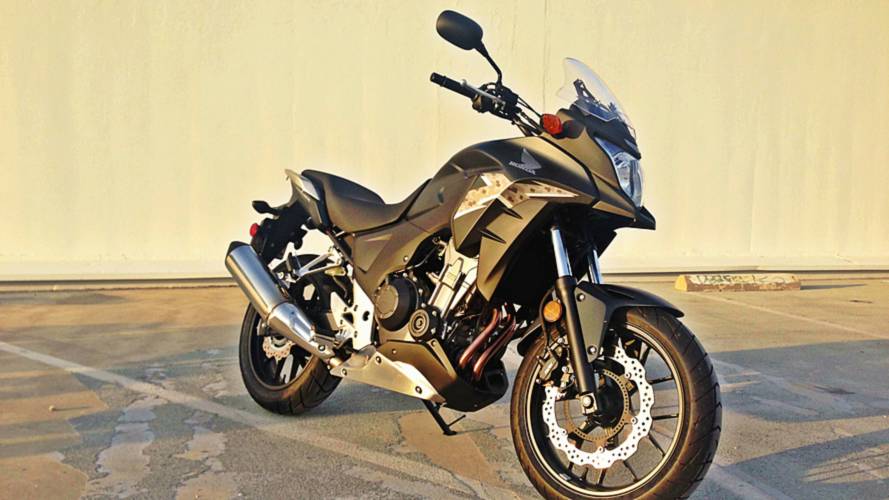 The third member of Big Red’s new 500 family adds adventure style and a tall riding position. The Honda CB500X is the only member of that range with significant mechanical differentiation — longer forks.

This diagram should help explain things. Starting with the same basic package as the CBR500R and CB500F — 471cc parallel-twin housed in a steel tube frame — Honda has bolted on 20mm longer forks. That creates more fork travel — up to 4.9 from 4.3 inches — obviously, but also has the effect of increasing rake by one degree to 26.5 degrees, trail grows from 4.05 inches to 4.29 and the wheelbase is increased by half an inch to 55.9 inches.

The ProLink shock remains the same as that used on the other bikes, with 4.7 inches of travel and preload adjustability. But, a taller seat and upright bars create a taller, more spacious riding position. The CB500X’s seat sits at 31.9 inches to the CBR500R and CB500F’s 30.9 inch height. Compared to those bikes, the fuel tank is larger too, increased from 4.1 to 4.5 gallons.

An adjustable windscreen and what appears to be the same headlight as fitted to the Honda NC700X rounds out the list of changes.

The rest remains identical to the other 500s. That liquid-cooled motor develops 47bhp at its 8,500rpm redline and 32lb/ft of torque at 7,000rpm. That motivates an all-up kerb weight of 430lbs. That’s measured with a full tank of fuel and is 5lbs up on the other 500s thanks to that extra capacity.

All three are designed to capture the hearts and minds of novice riders or someone more experienced just looking for something easy, fun and cheap.

None of them are outright performance bikes; instead of a laser-like focus on going fast (typically achieved at the expense of every other dynamic parameter), they’re broadly applicable, fun bikes that would be good to learn on, good to commute on, good to take trips on or good just to tool around on at the weekends. Motorcycles as exciting transportation, not ridiculous toys.

Sean came over one night on our new Suzuki V-Strom 650 long termer and ended up riding home on the CB500X just to try it out. Before he hopped on the Honda, he asked if it was going to be exactly like the CB500F and CBR500R we rode to Laguna Seca last month. With the exception of the handlebars and seat, those bikes feel exactly the same, so he was understandably skeptical that the CB500X could actually be different.

In response to that question, I told him that it really doesn’t feel much like the other bikes. It feels larger and more grown up, like a much bigger motorcycle. 30 minutes or so went by, enough for him to make the evening rush hour ride from Hollywood to Long Beach and I texted him to see what he thought.

“Damnit, I hate it when you’re right,” came the response.

That more spacious riding position, the extra inch between seat and peg, the wide, upright bars and the longer travel, more plushly damped forks really do add up to a bike that simply feels more mature than its siblings.

Steering feels faster, thanks to those wide handlebars, but the CB500X is also more stable and more able to hold a line without wobbling around thanks to the longer wheelbase and more conservative geometry. Better damping control means the longer forks aren’t softer, leaving able to soak up bumps, but also deliver both excellent feel and control over what that 17-inch front tire is doing.

The taller riding position means you can see over most traffic. The dinky windscreen is surprisingly effective in the higher of its two positions, redirecting air off your torso and onto the top of your shoulders, leaving your helmet buffet free in clean air.

The next day, Sean and I were feeling restless, so took the V-Strom and CB500X up Angeles Crest Highway to grab lunch at Newcomb’s Ranch. I rode the CB500X on the way up there, he rode it back. It was just a jeans-and-jackets casual ride, but on the way up the mountain I did my usual thing, passing supposedly larger, faster bikes — this time an R1200GS and a guy in a really unfortunate leather onesie on KTM 990 Super Duke. The little Honda proved a willing companion for fast riding, its height and upright riding position affording a great view around corners and cars and its Pirelli Scorpion Trail tires delivering plenty of confidence even over the melted tar snakes on this very hot day. A lot like the other 500s, just with better forks and vision.

Then, on the way down, I hopped on the V-Strom and followed Sean. That mid-capacity Suzuki is one of our favorite all-round bikes. It’s light and manageable in the city, all-day comfortable on the highway and, most surprisingly, a blast on twisty roads like this one. But man, after that Honda, it felt positively portly. It felt heavy to push around, slow to steer and its more powerful engine was less willing to rev match downshifts and just wasn’t as able to play along with spirited riding than the smaller Honda. Wow.

For the first time ever, I actually had a hard time keeping up with our very own Captain Slow, as he just merrily scooted down the mountain, with no idea that I was trying hard, but still falling back.

Back in town, things got even worse. A bike that we’d previously considered a good companion for splitting heavy traffic suddenly felt large and cumbersome trying to keep up with the dinky Honda. The CB500X would just scoot through gaps that were simply too small for the V-Strom to fit through at all.

Don’t get us wrong, the larger Suzuki is going to be the more capable tourer, but in town or on a mountain road, the little Honda is the much more capable machine.

Little changes add up to a lot. The CB500X retains the agility, ease and willingness of its siblings, while gaining a more composed nature.

Another inch of leg room helps you spread out.

Despite their misleading name, the Pirelli Scorpion Trail tires are an excellent choice for real world street duty. They’re hugely confidence inspiring around town in sketchy conditions, but also willing and able to drag peg on a good road.

Even without adjusting the preload, the CB500X is totally at home carrying a passenger. The back seat is comfy and spacious, the pegs low and those grab handles are huge and well positioned.

A commanding riding position, wide bars and punchy engine combine with the light, fast handling delivered by the 17 inch wheels to create something of a supermoto-like feel around town. No, it’s not some race-tuned, snarling beast capable of 60 degrees of lean, but it is agile and responsive, even over bad pavement.

You need a specially designed C-spanner to reach the preload adjuster on the shock, but it’s not included in the stock tool kit.

The little Honda didn’t engender much respect from Harley poseurs when I rode it into their party.

$6,000 base, add $500 for ABS. Same as the CBR500R; we’d buy the X. That’s $1,500 cheaper than the non-ABS/DCT NC700X. The difference between the two grows to a staggering TWO GRAND when you spec ABS on both and the CB500X doesn’t make you pay for an unnecessary transmission to get the good brakes. The NC700X is going to be a little better at carrying a passenger and its low center of gravity is awesome off-road, but I’ve gotta tell you, the difference is much less than that price differential suggests. We’d go for the 500X.

Outside Honda, the nearest competition comes from that V-Strom and the Kawasaki Versys. The CB500X is hands down better than both in town or on a good, winding road, but the Suzuki is the better choice if you’re mostly planning distance work. The Honda feels far lighter than the 30lbs advantage over the Versys makes it sound. This thing is just a killer deal.

Want an easy-to-ride, fun, affordable bike to commute around the city during the week, then head off on a trip during the weekend? Whether you’re a novice looking for your first new bike or an experienced rider looking to save some money, you just found it.

To all my friends who’ve been waiting to hear if they should buy one: yes you should.