To Yosemite and back on a classic BMW 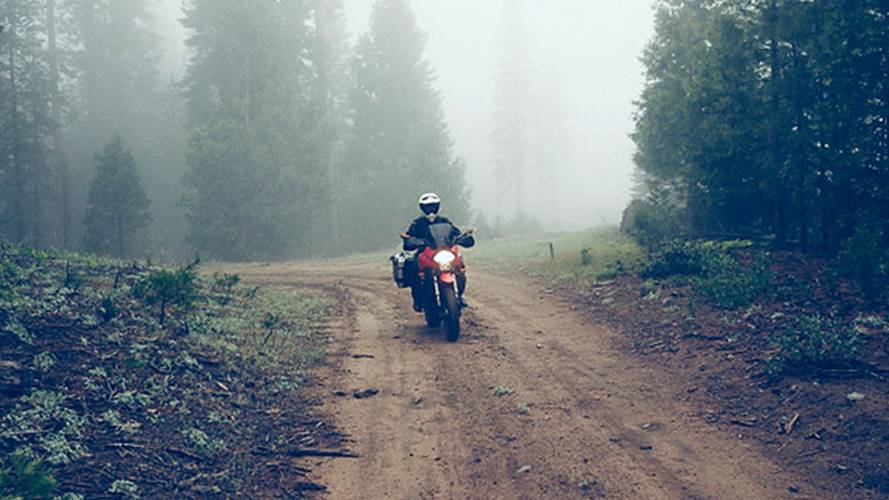 Over Memorial Day Weekend a few weeks back a group of friends and I rode from Southern California up to Mariposa, just west of Yosemite in the Sierra Nevada Foothills, to attend the 40th Anniversary 49er Rally hosted by the BMW Club of Northern California. Another group of friends from San Francisco rode out and met us there. Only three of us rode in on BMWs: me on a R80ST, my twin brother Rudi on...

Over Memorial Day Weekend a few weeks back a group of friends and I rode from Southern California up to Mariposa, just west of Yosemite in the Sierra Nevada Foothills, to attend the 40th Anniversary 49er Rally hosted by the BMW Club of Northern California. Another group of friends from San Francisco rode out and met us there. Only three of us rode in on BMWs: me on a R80ST, my twin brother Rudi on a R80/7 and Chris on a R1150GS, but the Club welcomed all of us and the rally gave us the perfect spot to set up a home base and explore the excellent roads nearby. The other riders and bikes were Jimmy on his new (to him) KTM 950SM, Johnny on a KTM 950 Adventure, Colby on the bulletproof Suzuki V-Strom 650, Tommy (past owner of Ashlee's FZR400/600-GSX-R-R6) on a Kawasaki Versys and Graham on his Triumph Speed Triple. A total mishmash of bikes, ready to rip.

Entering the rally grounds, it became hilariously obvious that we were the youngest riders there by a solid 15-20 years. This made finding each other super easy, we just had to look for someone without grey hair and there was a 90 percent chance it was someone from our group. Needless to say, this was our running joke throughout the weekend and even the "Greyhairs" were surprised to see us and commented on how stoked they were that younger riders were in attendance. There were lots of cool Beemers from early /2s, sidecars, Airheads, K bikes, to the most modern, farkled-out GSs, it was a live BMW bike porn fest! I've never seen so much Aerostich in one place.

Like I said everyone was super cool to us and the general vibe was great, except for our neighbor, who accused us of being drunken, fighting, cussing hooligans while we were making breakfast on Saturday. I'm not really sure what gave him that idea (honestly, we were well behaved and in bed before most), but that old grump was the only member of the Fun Police we met over the weekend. The BMW Club of Nor Cal had many events planned throughout the weekend, including many seminars, riding and maintenance clinics, an English Trials course, raffles and lots of vendors selling great stuff. I had planned on attending some of the events, but riding took up too much time and all that was open when we got back each day was the Bier Garden and a taco truck.

Saturday was a chilly, gloomy day, but that didn't stop us from exploring. I had done some research on Pashnit.com prior to the trip and mapped out some rides that seemed to be fun, the other guys had no idea what was in store for them. We headed north on 49 towards Coulterville, that section is know as The Little Dragon, in reference to the famed Tail of the Dragon in Tennessee and North Carolina. While it didn't have the same amount of turns as the famed Dragon, I did count about 50+ turns in 3.5 miles from the top to the bottom.


View Nor Cal Beemer Rally in a larger map

From Coulterville we headed north on County Highway J132 or Greeley Hill Rd., we started to gain elevation and ascended into the clouds. We then headed east on 120 to Cherry Lake Rd. It is narrow and windy, with limited traffic and good asphalt. By now we were way up in the clouds with super limited visibility and wet roads, it felt as though we were in some European forest. It has low vehicle traffic because most people just head straight to Yosemite. There are tons of fire roads splitting off the paved road that beg to be explored, a few us headed up one and couldn't believe how cool it was up there. We eventually made it to Cherry Lake, which is a water supply for San Francisco and part of the Hetch Hetchy water project. There is a nice Forest Service campground that would make for a fantastic base camp for dual sport riding in the area.

We left the lake and continued down Cottonwood Rd. There was some fresh snow on the side from the storm a day earlier and we quickly descended out of the clouds and back into warmer weather. Cottonwood Rd. is also lightly used by trucks and cars until you get to the bottom, the biggest danger is huge pinecones and rocks in the road. It also has a center line which encourages oncoming vehicles to stay in their lane, sometimes. This road can be ridden super fast and I can't think of too many times where it straightened enough to keep the bike upright. At the bottom we met two other friends that rode out from San Francisco in Soulsbyville, Stueve on a sweet CB750 and Tim on his mint Ducati GT1000. We blasted back to the rally along Highway 49/120, it's a really fun country road, that allows you to really rip (if you're so inclined). The section from New Priest Grade to Coulterville is full of fast sweepers and has brand new asphalt. We hit the Little Dragon going the opposite way and then back to the rally to cook dinner and hang with some Beemer bros.

We all woke up early with excitement on Sunday, it was finally sunny and warm. If Saturday was any indication of what to expect, Sunday was going to blow our minds. We headed out along Highway 140, it follows the Merced River and makes for some really fast and fun sweepers. River roads like this are, in my opinion, some of the most fun roads to ride, super fast with lots of visibility. The road becomes a one way for a bit and you have to wait at a red light for the other vehicles to pass, this is a good time to creep up to the front and have the road all to yourself. We got to El Portal and traffic was already backed up about 5 miles to the entrance of Yosemite because it was a holiday weekend. We slowly creeped our way to the front of the line, there was no way I was going to let my air-cooled bike overheat in that nonsense. The Ranger at the gate wasn't too amused by our antics, but let us in anyway with just a warning.

Soon enough we made it through and headed towards Tioga Pass, it was closed for a few hours on Friday due to a late spring snowstorm. There was about 6 inches of snow still along the road and the ice on the road made things interesting. We stopped a few times to thaw our fingers and at one stop Rudi realized that he had bent his rim a bit. I guess he'd gotten too rad somewhere. It wasn't too bad and Stueve and he did a minor roadside truing. Tioga Pass is a beautiful road, but it's definitely not a place to speed, the Park Rangers are on the lookout, not to mention the idiot drivers that stop to blog a squirrel. The descent down Tioga Pass into Lee Vining always takes my breath away, it opens up so fast and it is so steep. I'm usually not scared of heights, but it always makes my heart pump a little faster when ever I start going down. It's amazing. We stopped for lunch at the Whoa Nellie Diner at the Mobil gas station in Lee Vining, it has some of the best fish tacos ever and they serve their food on real plates with silverware, it's not what you'd expect. From Lee Vining we blasted north up 395 to Travertine Hot Springs in Bridgeport. There were quite a few people there, but 10 stinky dudes coming in on motorcycles has a way of clearing out the tubs. We soaked for about 30 minutes and suited back up and hit the road. I couldn't believe how good the springs made me feel, all the stiffness and pain from the past two days of hard riding totally disappeared.

We continued north on 395 out of Bridgeport to Highway 108/Sonora Pass. It starts out mellow enough and it feels like you are in Montana or Northern Colororado, huge peaks and wide open meadows. It quickly becomes full of tight, narrow and steep turns and continues like this for the next 80+ miles. It is hands down one of my favorite roads I have ever ridden. It's like being on a 2 hour roller coaster. The best part is they close it in the winter, so it doesn't get beaten up by snow plows and it has very little traffic until you get west of Strawberry. West of Strawberry the road quality drops and there are tons of tar snakes on the road, but by then you are ready to just cruise awhile. We got back on 49/120 in Sonora and headed back to the rally.

These are some of the most fun roads I've ridden in the States and they are so close to Los Angeles and San Francisco that you really don't have an excuse to not head up there for a weekend. The police presence is low, except in the Park and the roads have relatively low traffic. The BMW Club of Nor Cal puts on a first class event event and I look forward to attending next year.

Nikolaus Jung is a fashion/portrait/reportage/travel photographer based in Los Angeles.