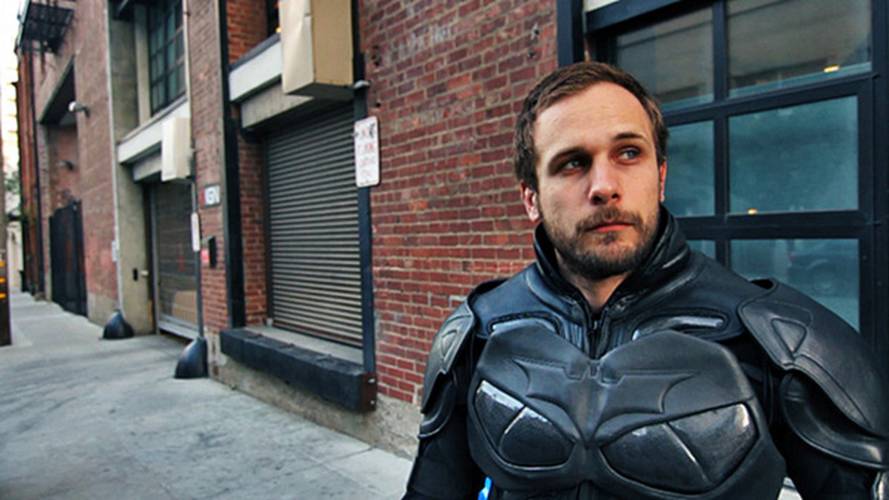 It takes two people to dress one man in the Batman motorcycle suit. Not sure how many workers it takes to build the thing, but considering the myriad patches of leather that comprise its construction I guess the suit requires at least one cow.

A lot goes into making make-believe this believable. Including approximately one thousand, seven hundred real dollars, which is more than most adults will spend to dress like Batman. However, it's not really much more than motorcyclists already spend on a full set of bike gear--a leather jacket, leather pants, leather boots and gloves can easily add up to more and will leave riders looking more Power Ranger than Dark Knight. So might UD Replica's Dark Knight Rises "costume" practically displace more traditional motorcycle attire for daily riding?

Nah. I got a chance to sample the costume for a video shoot at the office, and while I spent just half an hour riding in the thing I did wear the Batman motorcycle suit for approximately five consecutive hours. It really does take the help of another consenting adult to fully dress the suit (with some practice, a dedicated Batfan might learn to cope without the extra hands). Despite the mesh construction for much of the suit, it's quite hot to be in. The suit chaffed my arms in a couple of spots--insides of my elbows and fronts of my shoulders--and the molded hard parts that contribute to the stellar, authentic Dark Knight-look restrict some movements I generally take for granted.

Most notably, the hard chest piece gets in the way of upper arm movement and possibly contributed to the shoulder chafing. The chest facade attaches to the front of the jacket via hook and loop. (No, my pecs don't normally look like this.) The other significant problem is the, ahem, cod piece, which is flattering but presents a serious impediment to sitting down. And I like sitting down.

But where it really counts--on the bike--the Batman suit is surprisingly easy to wear. In the half hour I spent riding in the gear, back and forth through an alley, in front of a camera and on a short freeway stint with a pillion, I felt remarkably comfortable. There's some stiffness in turning my head and torso, but nothing I wouldn't expect from brand-new motorcycle leathers. As a riding suit, the Dark Knight gear is impressively functional.

More impressive than the function is the form. This thing looks incredible, no cheap Halloween abomination but an honest-to-goodness replica of Batman's suit from The Dark Knight Rises film. And it's not like I've got a Batman-quality body to make it look good, more in common physically with Michael Caine than Christian Bale, yet I still look the real deal from the neck down. Riding around San Francisco's South Beach, I felt fascinated stares from urban dwellers not easily distracted by aberrant attire.

The details in the molded leather and Kevlar, the spiked forearm gauntlets, and studded utility belt do justice to the film original. The only letdowns? A cheap-looking Batman logo on the belt and mesh gloves that are, frankly, a bit shit.

Seventeen hundred American dollars will buy higher quality, more protective duds from Dainese et al., yet the Batman suit is no cos-play fake. Both as a movie replica and functional motorcycle gear, the Dark Knight Rises motorcycle suit is legit. Slightly insane, sure. But then Batman's not known for his sanity.

Mark is an Executive Editor at IGN and writes about having adventures by Ninja 250 on his blog, The Sunday Best.