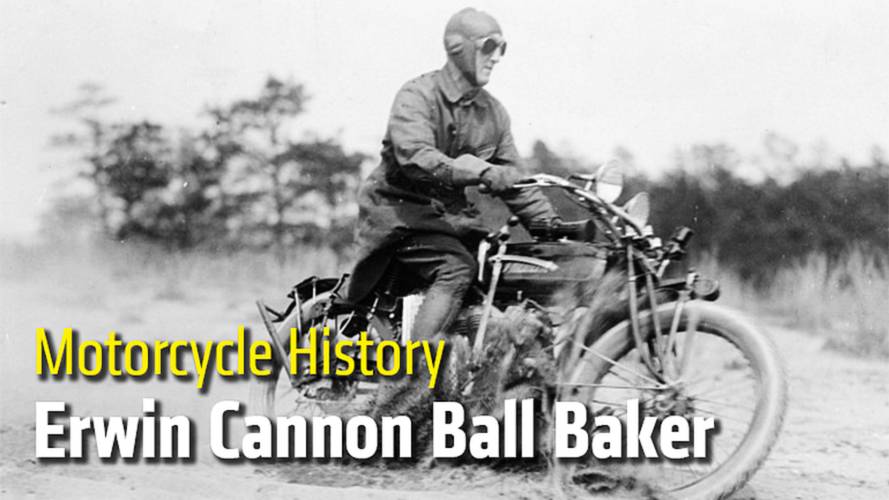 From 1908 until 1933, Erwin Cannon Ball Baker rode and drove more than 5.5 million miles and set no less than 55 different cross country records.

Each week RideApart looks back at key milestones in motorcycle history from technical innovations to significant model introductions to racing successes and, of course, some of the disastrous things we’d rather forget. This week we look at the story of man you’ve probably never heard of. Erwin Baker, who was a motorcycle record breaker and at one time more famous than then U.S. President Herbert Hoover.

From 1908 until 1933, Baker rode and drove more than 5.5 million miles. 5,000 of which were spent just racing up and down Pikes Peak. He traversed the U.S. 126 times and set no less than 55 different cross country records. He also won one of the first ever motorcycle races on an Indian held at Indianapolis on August 12, 1909.

Baker quickly established himself as the man to beat on the racing circuit in 1911. He took 53 victories, 23 podiums and set 11 new speed records in the process. In 1912, Indian Motorcycle recognized Baker’s potential and hired him as a factory-sponsored rider, a position he was to hold until 1924.

At the turn of the century all motorcycle manufacturers were looking for ways of endorsing their products to prove their durability and build quality. Record breaking was considered one of the best ways of doing this. Erwin Baker, who began his career as a machinist working in Indianapolis, was one of the first people to see there was money to be made from the motorcycle manufacturers by getting them to pay for record breaking attempts. He offered them the simple deal – no record, no money.

In 1914, Baker took part in a cross-country race across the U.S. from west to east coast on an Indian. Back then, roads and the U.S transport infrastructure were, at best, primitive. Only four of the 3,379 miles Baker covered were on paved roads, 68 miles were actually on a railroad track. Baker finished this grueling event in 11 days, 11 hours and 11 minutes, a full nine days faster than the previous record holder and four days faster than the record held for an automobile.

This feat of endurance led to one New York newspaper reporter calling him “Cannon Ball Baker,” a name Erwin liked so much he adopted it and eventually had it copyrighted.

In 1915, Baker turned his attention to cars and was approached by Harry Stutz to use a Stutz Bearcat, to cross the U.S. If he broke the record Baker would receive a new Stutz worth $20,000 — a huge amount of money back then.

Baker of course accepted the challenge and, with a newspaper reporter as his co-driver, he managed to get from San Diego to New York City in 11 days, seven hours and 15 minutes.

Baker was always looking for ways of improving and he never let the records stand for long. The following year he did the entire trip again and improved his time to seven days, 11 hours and 53 minutes.

After the First World War, Baker decided to tour the U.S. on an Indian, visiting each of the then 48 state capitals. He did this in 78 days, 18 hours and 33 minutes covering more than 16,234 miles. Allegedly he only slept four hours a day while undertaking this endeavor and to mark this achievement, Baker immediately set out on a trip from Tijuana, Mexico, to the Canadian border, which he did again on an Indian, in two days and five hours.

Thereafter, Baker concentrated even more on cars and endurance records. He raced once at the Indy 500 in 1922 finishing 11th and continued to traverse the U.S. breaking distance records in automobiles.

In 1930, Herbert Hoover, the then U.S. President, reputedly remarked that because of his feats more people knew the name of Cannon Ball Erwin Baker than his own.

By 1933, times were changing. There were more paved roads than ever before and state police departments now patrolled them fining speeding motorists. However, in one last dash from coast to coast in 1933, Baker set a new record of 53 hours, 30 minutes in a Stutz. The half an hour, Baker said, was for his one rest stop. Nobody has since officially broken Baker’s record in the 80 years since it was first set.

Baker retired from record breaking in 1934 and worked on inventing things including a single-cylinder rotary motorcycle engine. Neither brought him the fame or fortune that he had hoped. Due to his links with automobiles and motorcycles, Baker was appointed as the first ever commissioner of NASCAR in 1947. This would be a position he held until he died at the age of 78 in May 1960.

As the saying goes, they don’t make them like that any more. Cannon Ball Erwin Baker was definitely a one off.