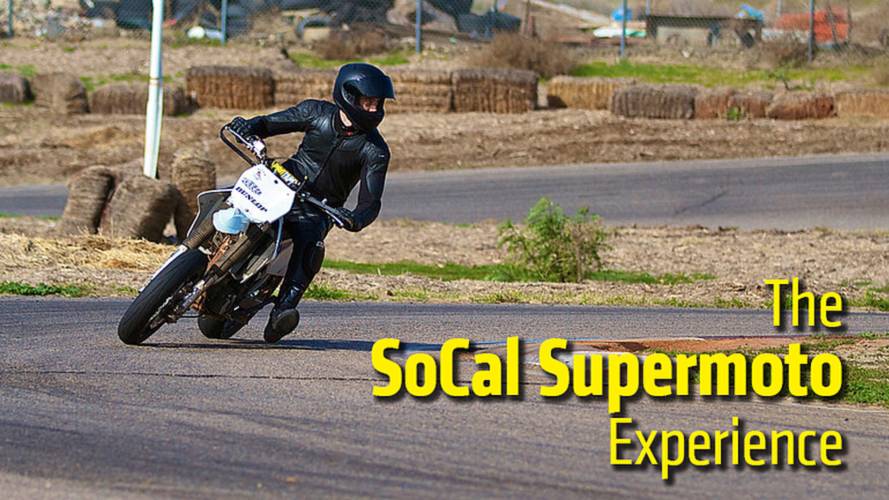 SoCal Supermoto School combines DR-Z400’s, a small track, and a light classroom feel into one incredible experience. Read how a class goes in this review.

SoCal Supermoto School combines DR-Z400’s, a small track, and a light classroom feel into one incredible experience. It is part school and part two-wheeled playground which makes it one of the most fun and productive days you’ll have on a motorcycle. Here’s what to expect.

9:00 AM: We arrive at Adams Motorsports Park to some Hollywood stunt drivers drifting around the track within a few inches of each other. A few minutes later, SoCal Supermoto’s creator Brian Murray pulls up in his Sprinter van and asks if we mind helping him bring the bikes down to the pit. You can tell instantly this isn’t going to be like most track schools where you’re treated with kid gloves and like you couldn’t possibly touch anything until you’ve signed away all of your rights on some waiver… I feel comfortable instantly.

9:45 AM: Our class of eight is geared up and Brian begins the classroom portion of the day. He is full of passion and this straight shooter begins by saying that he doesn’t know everything, just that he’s done this a long time and can share what’s worked for him. Lesson number one: BRAP (Brakes, Ass, Push) into the corners and then we’re sent out for our first session to try and put it into practice and to learn the track.

10:15 AM: Time to ride. Brian has each of us follow him for a lap to see the general lines and watch his body position, and so he can make sure no one is absolutely terrible. Once everyone has had a chance to follow him, it was playtime for everyone including Brian.

10:45 AM: Back into the pits for another lesson and then more time on the track. Each time we stopped, he would give individual instruction based on what he saw, and then would provide another item or two for us to work on as a class. Each break felt like it came just as my hands or wrists wore out, and magically lasted until 30 seconds after I wondered when we’d get to ride again. Fifteen to twenty minutes on the track, fifteen or so minutes off, with a slightly longer break to eat whatever lunch you’d brought.

1:00 PM: Brian appears in street clothes holding a camera and for the next few sessions on the track, we found him hiding in corners trying to capture photos of us looking way more badass than we probably are.

3:00 PM: During the pit meeting, Brian informs us that it’s now time to open the dirt section. While the cones are were moved, he quickly instructs the class on how to handle the brief dirt section of the course. Not how to ride in dirt in general, but what to do for each of the few obstacles in this specific course. This was hugely helpful for the newer riders in our group, while also easily applicable for those of use who would want to apply the techniques to other riding situations.

4:00 PM: Midway through our session, I decide I need to pull into the pits early. My butt hurts, my wrist is sore, and I’m not sure how many more times I can pull in the clutch lever. Why all the pain? I’d been thrashing a supermoto bike for hours! Ripping around turns, sliding around the track, and jumping off of dirt step-ups. When I first arrived, I thought “15 minutes on, 15 minutes off” sounded like a rip off. After six or seven hours, I wished it was more like ten minutes on and twenty minutes off. We got in a ton of riding time, while still having plenty of time to ask questions and discuss technique.

4:15 PM: Everyone stops for a group photo and wrap-up. After a day where everyone made such progress and had such a good time, we felt far more like friends than any other school like this I’ve been to. Contact information is exchanged and then it’s time to pack up and head home.

As a teacher, Brian is absolutely fantastic. He’s able to explain things in a way that makes sense and that become applicable but all with the enthusiasm of someone who is sharing what he figured out last week (though we’re assuming that’s not the case).

For the price of a track day where you’d need to bring your own bike you get his expertise and riding techniques, a very full day of riding, and a bike rental (including gas). Whether you’re a beginner or thinking about racing, the SoCal Supermoto School is an incredible experience and a bargain for the price.