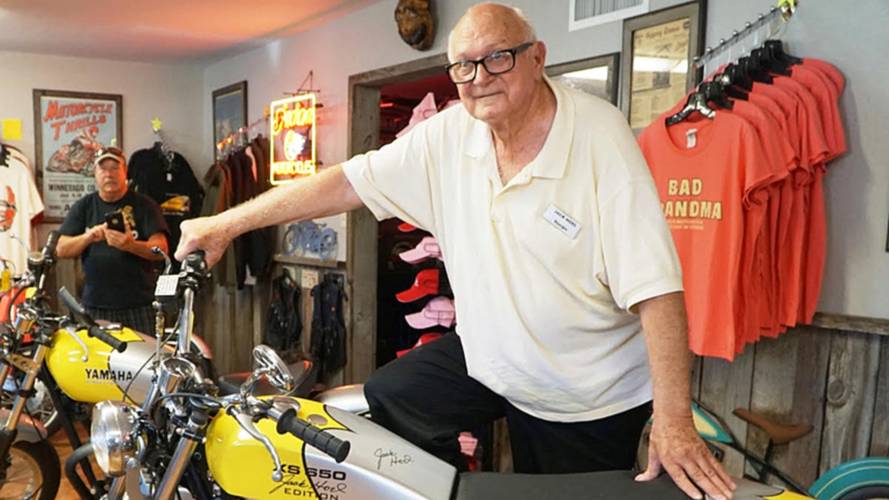 Jack Hoel, son of Sturgis Rally founders Pearl and Clarence “Pappy” Hoel, has been honored with a limited-edition Yamaha street tracker. Jack grew up his father’s Indian dealership and was part of the Jackpine Gypsy Tours throughout his childhood. In the Sixties he rode flat track events on a Yamaha Ascot Scrambler, and was later instrumental in the development of the Yamaha XS650 dirt tracker.

"We had maybe 300 people in those days,” he said. “And they all came for the races, before the vendors and concerts. The excuse for having this whole thing is the motorcycle races.

The big-time racers would come into the shop and work on their engines. Dad would pay some of them an extra $100 to come to town on an Indian. An extra hundred bucks was a lot in those days."

READ MORE: The Sturgis Rally, Then and Now

Jack recalled his first job with the Rally as a youngster, in a Jackpine Gypsy outfit his mom made. “I brought the rally queen's crown out on a pillow. That was my claim to fame,” he said. "I guess I was the first mascot."

Hoel has remained involved with the Rally ever since, and in his honor Sturgis Vintage Cycle and Gypsie Vintage Cycle teamed up to create two special editions of the XS650 Yamaha, each with his signature on the tank.

Tim Anderson of Sturgis Vintage Cycle and Coe D. Meyer of Gypsie Vintage Cycle have more vintage-style trackers in the works, echoing the profiles of the Sixties and Seventies Triumphs and BSAs that battled Harley-Davidson on dirt ovals across the country. (With occasional interventions from an upstart kid named Roberts on a Yamaha twin.)

Now, with the Harley vs. Indian tussles rejoined, and the supporting cast from Kawasaki and Yamaha vying for feature roles, the style and substance of flat track racing is enjoying renewed interest among those too young to catch it the first time around. It’s good to hear them reminded that, in Jack Hoel’s words, “The excuse for having this whole thing is the motorcycle races.”

READ MORE: Dine with the King - Kenny Roberts Invites You to Dinner