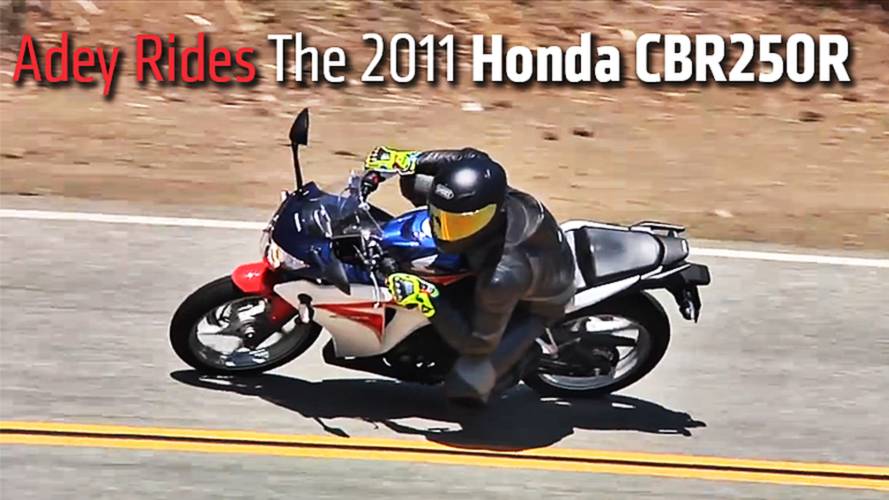 Adey Rides The 2011 Honda CBR250RIt’s Sunday on Mulholland, the usual suspects are putting in fast laps like an SBK qualifying session. Sprinkled in...

It’s Sunday on Mulholland, the usual suspects are putting in fast laps like an SBK qualifying session. Sprinkled in the mix of fast riders are the inexperienced n00bs on their R6s and gixxer 600s, exhibiting poor riding technique like a pack of C group riders at a Motoyard track day. Then you have the on-lookers who post up at the hill above that last turn to view the Rnickeymouse show live. And me, 6’ 3” on a CBR250R...

It’s rare to find any HFL staff on Mulholland, especially on a weekend , so you can imagine my reaction when I spotted Grant amongst the onlookers. He was surrounded by a group of LA bike club members (can’t recall the name of club), one of them happened to be a reader and recognized Grant and I immediately. After a short dialog with Grant and our bike club friend, Grant threw me the keys to his Honda CBR250R. “Take her for a spin,” he said grinningly. Being the bike-curious rider that I am, I eagerly obliged.

I’ve never ridden a 250 before, so was quite curious to see how it would handle on the infamous Snake. I twisted the throttle back as hard as I could to build some good downhill momentum into turn two where Rnickeymouse sits. I came into the turn hot as I would on my R1, began downshifting to engine brake into the turn but quickly realized the baby Honda has no engine braking whatsoever! I was stuck with two options: just dive in and trust the CBR250R to turn on its little skinny tires and pray the rubber grips, or grab a handful of front brake and rear brake and risk understeering straight into the guardrail and become an instant YouTube sensation on Rnickeymouse’s channel.

Chose to trust Honda built a bike that could handle the simple task of cornering at speed no matter what the badge reads on the side of the fairing. To my delight the little CBR250R railed thru the turn only scrubbing a small amount of speed due to cornering forces applied to its tiny tires. The rest of the way downhill was a breeze, as I quickly learned to carry more corner speed through each turn by not braking too hard and trusting the bike and tires to carry me through at full lean. I actually passed a few 600s and cruisers on the way downhill. Once at the bottom, I had a good grasp of what the bike was capable of. Heading uphill the CBR was able to take most of the turns at 35mph or better, scrapping knee and pegs in only a few of the major positive camber corners.

The key to having a fun uphill run is to not interrupt your momentum. It’s little things like this that make you a better rider in my opinion. You learn to stay on the gas in all the areas where you need to and not coast with uncertainty. A major benefit from riding a CBR 250R fast is lack of fear factor involved. The bike doesn’t overwhelm you with tree blurring speed, so you’re allowed to process your thoughts and plan your actions according to the road. Keeping a bike balanced and full of steam is a skill that most don’t acquire on too-powerful 600s and liters bikes. Why? They’re scared of their machines.

Serious about learning the art of riding motorcycles fast? My advice is to start small and learn to ride a slow bike fast. That way you’ll be in control, not the machine. The CBR250R would make a great learning tool for anyone serious about developing rider skill.