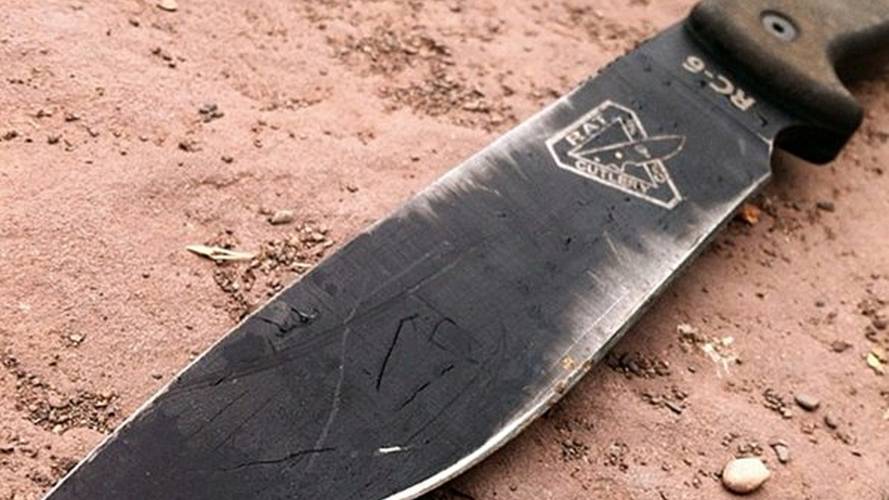 Honda NC700X: the Swiss Army Knife of bikes?Not sure if you know this about me yet, but I’m a knife nerd. Blame a youth misspent causing trouble in...

Not sure if you know this about me yet, but I’m a knife nerd. Blame a youth misspent causing trouble in the outdoors. So, when they called this new Honda NC700X adventure-style, automatic-transmission equipped, half-a-car-engine thing “the Swiss Army Knife of bikes” in this morning’s pre-ride brief, I was a little skeptical.

My favorite knife right now is this Esse-6. It’s made by a tiny company from Alabama, is way too big to carry every day, is illegal in most places at most times and, at 12oz and a foot long, adds a considerable amount of bulk to any load out. At $160-ish, it’s expensive enough that it’d ruin my day if I broke or lost it. I’m prepared to put up with all that because, for my ultra-light hiking and dirt bike trips, it’s a near perfect tool. It gives me the functionality of an axe in a package I can wear on my hip. It’ll take down a dead tree, then split it into useable firewood in a matter of minutes. Made from 1095 steel, it also takes a fair amount of maintenance. It’s an exotic, specialized tool that 99 percent of people would never know how to or want to use. That’s why everyone else carries a Swiss Army Knife.

My favorite bike right now is the Aprilia RSV4. It’s also made by a tiny company, this time in Noale, Italy and is obviously exotic and highly specialized. 99 percent of people would shit themselves on it in 1st gear. That’s why most people drive cars.

Where the NC700X comes into all this is in its broad applicability. Everyone, including my mom, carries a Swiss Army Knife. That’s because it can open wine bottles, cut open a package, open a beer, saw a little wood, pull out a splinter or even put a new hole in your belt. My mom’s never going to need to take down a tree out in the wilderness, in a snow storm, and trim it down to the dry wood at the very core in order to keep herself alive. Most people don’t need a motorcycle to set track records or drag elbow on The Snake, they need a practical, economical, fun bike they can use every day and enjoy riding at a realistic road speeds. Judging by the ride we did today in Malibu, the NC700X is that bike.

Let’s make a list of features that make motorcycles such practical, fun things to get around on: price, weight, control, comfort and practicality. Power and speed really don’t come into that. Any bike, even this 51bhp, 670cc parallel-twin will out-accelerate most supercars, so power and speed are just sort of a given.

Price: The NC700X will start at $6,999 for a base, non-ABS, non-DCT model. That’s crazy cheap for a bike that will get you to work, take you across the country, take you camping, or just do anything you need it to do. The version with ABS and DCT (read: automatic transmission), adds two grand to that price. Both features are nice to have, particularly for newer riders, but that extra $2k is a lot of money.

Stripped of its bodywork, the NC700 looks kinda like a big trials bike, huh? That pays off too, with the engine canted forward at 62 degrees, the steel fuel tank mounted under the seat and all that mass centralized down low, it feels like a much, much lighter bike than it actually is. Honda should do a blind taste test; you'd never guess this thing weighed more than 350lbs if you just pushed it around in a parking lot.

Weight: The NC is pretty heavy on paper — 474lbs (wet). But, by carrying all its mechanical bits and fuel incredibly low and centralized, doesn’t feel like it. It’s no more difficult to push or pick up or ride around at 0.0001mph than the 350lbs CBR250. That’s a neat trick and its achieved by a package that, shorn of its plastic, looks a lot like a trials bike. Seriously, it’s one of those motorcycles where you find yourself putting a foot down at stop lights not because you need to, but because you know you’re supposed to.

Control: That very low, very centralized center of gravity facilitates that control, but so does smooth, linear fueling, powerful-but-progressive brakes, a tall, empowered riding position and wide bars that contribute to very fast, but very predictable steering. Equipped with the auto tranny, I’d hazard a guess that someone who’d never ridden a motorcycle before could navigate a parking lot without trouble aboard the NC. In either configuration, it’ll be a great tool for learning or just for getting from A to B.

Comfort: One of the big secrets that no one will tell you about motorcycles is that most of them are horrendously uncomfortable. Even ones that look all cushy can turn out to be torture racks. Witness the Triumph Tiger Explorer or the BMW F800GS. Not the NC though. In three and a half hours of riding this morning, I didn’t get so much as a stiff neck. Don’t dismiss this either, comfort is key to usability. You could hop on this bike in stock form and ride it from LA to NY without ever wishing you were on anything else.

The clocks are incredibly clear and distortion free in any lighting condition. Again, something you take for granted that brings real benefits when executed correctly. The best part? Those are huge buttons on each side of the instruments, making them easy to operate, even with winter gloves.

Practicality: After “OMG, bikes R Dangerous!!!1!!” the most common reason given as to why you shouldn’t be riding one is some sort of perceived practicality deficit. I mean I don’t own a car and manage to live life out of a backpack, but god forbid I need a full size piece of plywood from Home Depot on short notice (they’ll rent you a truck from any store for like $20...). And practicality is where the NC700X absolutely aces things. Not only is it cheap to buy, but it’ll also be cheap to run. Claimed fuel economy is 64mpg average, while today the consensus was 59mpg during enthusiastic riding. That’s on par with the CBR250R, just in a bike that’ll easily pull ahead of traffic on the highway (top speed is 120-ish), even while carrying luggage or a passenger. Add to that heaps of storage room (the compartment between your legs held my size L Icon Airmada just fine) and the optional 45-liter, two-full-face top box and you’d be able to fit a week’s shopping. Bolt on the optional panniers (slimmer than the bars, thank god) and you’ve got more than enough to take off camping for a week or more. All the other factors combine to create practicality too; the NC is comfy, easy and frugal.

If this were any bike maker but Honda, the story would likely stop there. But with the NC, it doesn’t. Poking around, this isn’t a bargain basement motorcycle. Welds are extremely high quality, all the storage compartments and luggage opens with the ignition key, the mirrors are vibe free and deliver good vision, the tiny stock screen offers excellent wind protection; everything on this bike is suprisingly nice.

Watertight and lockable, there's room for a full-face helmet or a case of beer in there.

Handling? The non-adjustable forks and preload-only shock might look a little budget on paper and they are really soft, but both actually contain actual damping and the bike turns, holds a line and leans like a much more expensive motorcycle. The very low center of gravity means a little more lean angle per given speed, but hang off and that’s resolved. I was surprised that I didn’t so much as caress peg to pavement all day. If I owned one, I wouldn’t change a thing.

The competition? The Kawasaki Verys 650 is a little more powerful, but feels pretty much on-par to the Honda, while retailing for $7,800. The V-Strom 650 is faster, more versatile and actually capable of some dirt road riding, costs a little more — $8,299 — but comes with ABS as standard. My biggest criticism of the Honda is that ABS is only available as part of that DCT/ABS package, adding $2k to the price. As a bike targeted at new riders, commuters and such, it should really have ABS as standard. The Honda is friendlier than the Suzuki though, masking its 32+ inch seat height with slimness and that incredibly low Cg.

Options? This is the best application of DCT yet; that transmission actually makes it a better, smoother, more intuitive motorcycle, but adds (a lot of) money and complication. ABS removes no brake feel while increasing safety. The tall screen works great, really transforming the bike into a genuine tourer. The boxes are decent value and extremely well-integrated. The OEM crash bars? Wait for Touratech or somebody to come out with something that’ll actually protect the bike in a crash.

So that’s it. A bike that’ll tour, commute, ride around an MSF parking lot or take you camping all with equal aplomb. It might not open a beer bottle, but since it’s actually engaging and fun to ride, we’ll give Honda that Swiss Army Knife thing. The NC would be a great first bike, a great budget commuter or just a great only bike for anyone looking for to do-it-all on a price and running cost budget. If you think you need a car, think again, what you really need is an NC700X.

It’s not going to be the ultimate specialized tool for experts and it doesn’t give the emotional connection between man and machine an RSV4 does, but it’s a damn good motorcycle. I had fun riding it today and you will too. It’s a practical, affordable tool capable of solving most of the problems day-to-day life can throw at you.

Sorry for the stock images and short review, the CD Honda gave me with riding images won’t load on my computer and I’m (trying to) fly to Ashland to be the first journalist to ride the Brammo Empulse. Come back on Monday for that and hit this link if the gallery won’t load by itself: http://www.rideapart.com/2012/08/honda-nc700x-the-swiss-army-knife-of-bikes/?gal=1#/4