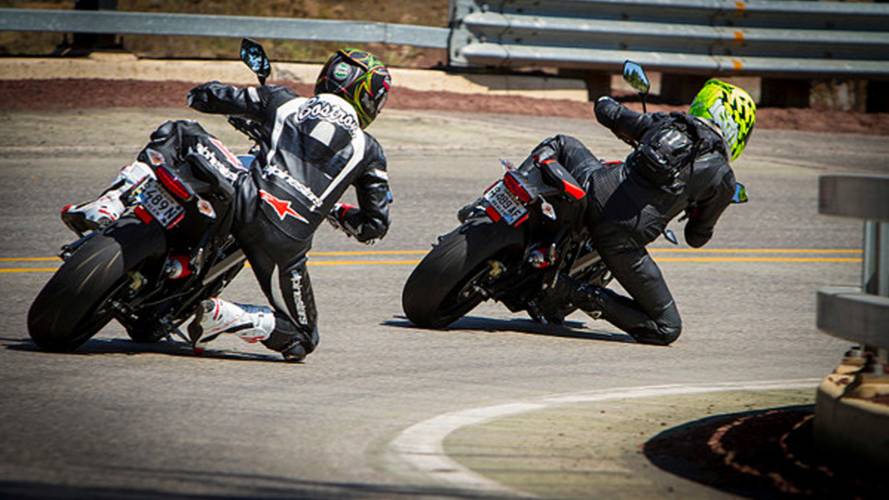 Electric motorcycles: slow, boring, short ranges, expensive. When I flew up to Oregon last week to ride the Brammo Empulse I expected a good bike. A practical commuter, an efficient appliance, maybe something a little bit fun. But, what I got was something entirely different. As you can see, this is a very serious motorcycle. Photos: Maddox Visual My first experience with Brammo was back in 2...

Electric motorcycles: slow, boring, short ranges, expensive. When I flew up to Oregon last week to ride the Brammo Empulse I expected a good bike. A practical commuter, an efficient appliance, maybe something a little bit fun. But, what I got was something entirely different. As you can see, this is a very serious motorcycle.

My first experience with Brammo was back in 2009 when they were visiting New York to get media types onboard the then-new Enertia. Craig, the CEO, seemed like a smart guy and the bike — friendly-looking, fitted with actual motorcycle components and capable of exceeding its modest performance claims — was pretty neat. But, it was still scooter slow and only capable of 30 or 40 miles on a full charge. Electric motorcycles: much promise, little reality.

Since then, I’ve seen the Brammo guys at shows and races, talked with them a bunch about their TTXGP racing program and watched as people I knew from mainstream motorcycling began to be drawn to the company. During that time, my enthusiasm for electrics waned as their much-hyped benefits failed to materialize during a virtually stagnant iteration process. That disappointment reached a new low when trying to live with only a Zero DS for a couple weeks a few months ago turned into trying to bum rides off friends so I could actually get places. You saw that disappointment in that RideApart episode. Electric motorcycles: no thanks.

The BRD RedShift SM was a fleeting glimpse of promise, but still resolutely a one-off prototype. Electric motorcycles: still in the future.

Now, cut from me telling people that an ugly Piaggio scooter is a better machine than a $14,000 battery bike to last Thursday, just before lunch in the mountains above Ashland. After taking a few passes around a particularly nice corner, I pulled over, pulled off my helmet and, with a huge smile on my face, let fly a long string of expletives concluded by something along the lines of, “this thing is awesome!” Brian, the bike’s deadpan designer, looked cautiously relieved. Eric Bostrom, the factory’s new racer who was along for the ride seemed to agree. He described the handling as, “better than the race bike.” And, revealed that following me through this corner was the first time he’d ever felt confident enough on the road to get his knee down.

This photo capture's Eric Bostrom's first-ever knee down on the road.

Let’s get the boring stuff out of the way. Brammo claims a top speed of over 100mph and a maximum range in excess of 100 miles. During my two-day ride, I saw 105mph on the speedometer and we got 75 miles out of a full battery in a mix of suburban and rural riding that included plenty of stop signs, traffic lights and a long stretch of divided highway with a posted speed limit of 55mph. Brammo claims 77 miles in mixed city/highway testing.

I hit a top speed of 70mph during that range test ride and cruised around at 5-10mph over the speed limit with no effort to maximize efficiency.

Using the SAE electric motorcycle standard testing, Brammo claims 121 miles in the city cycle (average speed 19mph, figure in lots of sitting at stoplights and that’s a realistic pace) and 50 miles in the highway cycle, which means a 70mph sustained speed. Eric and I saw 50 miles out of the 9.3kWh battery pack when riding at a very fast, knee down and full throttle pace with speeds exceeding 100mph.

Recharge from empty takes 8 hours on a standard 110v outlet or 3.5 hours using the J1772 Level 2 quick charger that’s now becoming an electric vehicle standard. It’s the same type that’s used by cars like the Nissan Leaf, meaning you’ll be able to use the same quickcharge stations they do. Just grab the pistol grip and plug it in where the gas cap normally is, no fussing around underneath the bike. On that Level 2 charger, every 10 minutes of charging adds 5 miles of range.

The company's favorite watering hole, Brammo installed two Level 2 quick chargers at the Green Springs Inn so they could top up mid-ride. Those chargers cost just $600 a piece and the Inn housed them in a neat old timey gas pump. Gasoline: so old fashioned.

It’s handling, not range or top speed that’s the name of the game with the Empulse though. Brammo benchmarked the Triumph Street Triple — a bike that’s practical on everyday commutes, but a blast to ride in the canyons too — endowing the $18,995 Empulse R (the only model I rode) with similar geometry, dimensions and ergonomics, but higher-quality, fully-adjustable suspension and lighweight forged aluminum Marchesini wheels.

Knowing that and seeing that huge aluminum beam frame, plus the normal sportsbike-sized rubber (180/55-17 rear, 120/70-17 front), it shouldn’t come as a surprise that the Empulse can go around a corner. But holy shit was I surprised that it’s better at doing so than that Street Triple.

Why? Brammo’s able to achieve some pretty extreme mass centralization with its electric drivetrain, squishing the batteries between the frame rails into a tight bundle around the ideal center of gravity. The motor and transmission are very small, contributing to that centralization.

You know mass centralization is good because of Honda’s significant push to inform people that the CBR range is a little bit like its MotoGP bike. But Brammo is able to achieve something even HRC isn’t, totally eliminating reciprocal inertia and the noise, vibration and harshness that comes with ICE propulsion. All those pistons whirring up and down at insanely high speeds have a way of blunting a bike’s turning speed. All those tiny explosions and their subsequent noise and vibration have a way of getting in the way of communication from the tires, suspension and brakes. Electric motorcycles: taking 100 years of motorcycle development to the next level.

The Empulse is simply a more pure experience than any gasoline-powered bike could ever be. It steers incredibly quickly, flicking into a corner or through a chicane like a much lighter, much more aggressive bike. Think supermoto fast, but unlike one of those bikes, it’s absolutely stable once you’re leaned over. Doesn’t matter what you do it it in a corner — brake, accelerate, bounce around, drag the peg, hit a rock — it just stays absolutely planted.

This is what had Eric wishing his race bike handled like this. He blamed the RR’s swingarm pivot location for upsetting the rear suspension under acceleration. The road-going Empulse has no such problem.

Where the 470lbs Empulse falls behind the 416lbs Street Triple is obviously in acceleration. Its liquid-cooled electric motor develops 54bhp and 46.5lb/ft to the Triumph’s 105bhp and 50lb/ft. With the Empulse accelerating in a straight line, think SV or Ninja 650 carrying a passenger.

Still, that’s enough acceleration to maintain a very serious pace on a twisty road. Riding the Empulse head-to-head with a Street Triple on the way from Brammo HQ to the Green Springs Inn, it was the Triumph that had to work very hard just to keep up. The Empulse’s basic pace, the speed at which it just naturally flows down a road, is equivalent to trying very hard on the Street Triple. Which one’s faster from A to B is simply reliant on the Triumph rider’s willingness to hit very high speeds on the straights. Electric motorcycles: corners are where it’s at.

In addition to the handling, the other big surprise with the Empulse is how effective the gearbox is. There’s a bunch of trickery inside to get it to work with the electric motor that I don’t really understand, but in action it’s dead simple, working almost exactly like a conventional bike’s six-speed manual. The only real point of weirdness is that you can let the clutch out in gear while at a dead stop; electric motors don’t spin unless you’re twisting the throttle.

That clutch is fairly heavy and the shift movement itself a bit clunky. Just like an ICE bike you can close the throttle a little bit and grab the next gear up without using the clutch, but as the day got hotter, I resorted to using it anyways anytime I wasn’t accelerating terribly hard as it just made shifting easier.

The Empulse’s motor revs out to a 9,000rpm redline and makes both peak power and peak efficiency at 7,000rpm. That’s a neat trick, because no matter if you want to accelerate hard or maximize range, all you need to do is keep revs between 6 and 8,000. The motor spins up very smoothly, sounding like the world’s meanest RC car, so there’s a row of LED shift lights along the top of the clocks that flash when you’re over 8k. I missed them a fair few times and the motor’s rev-limiter is very soft, all you notice is that the bike’s stopped accelerating.

With the need to chase a powerband, using the throttle, clutch and shift lever to do so, a much-needed level of man/machine interaction that’s been missing from electric motorcycles is recaptured by the Empulse. Riding along chasing a famous racer, dragging knees and pegs and climbing all over the bike, listening to the motor spin up and down sounding like a TIE Fighter there’s now nothing missing from the experience of riding an electric motorcycle. The Empulse is absolutely as involving as its ICE predecessors, adding a level of feel they could never have.

Riding along following Brian on the Triumph, Eric hangs back to ride next to me for a second. “Damn that thing’s annoying, huh?” Both he and I were happier on the Empulse, it simply feels like a more evolved motorcycle, no caveats needed. Electric motorcycles: finally here.

Galleries remain a little buggy as the site undergoes changes. If you can't click in directly, use this link, there's lots of nice pics to check out: http://www.rideapart.com/2012/08/brammo-empulse-the-electric-motorcycle-has-finally-arrived/?gal=1#/2