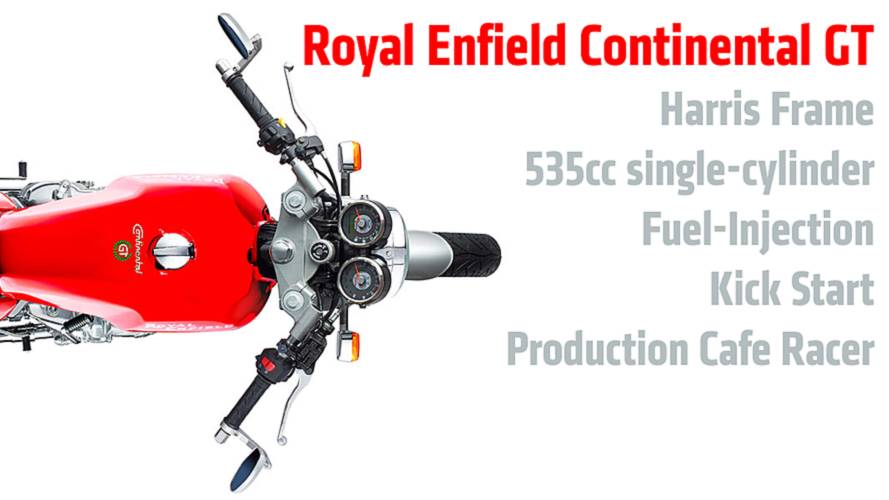 2014 Royal Enfield Continental GT: First Photos And SpecsToday at Ace Cafe London, the wraps came off the final production version of the 2014 Royal...

Today at Ace Cafe London, the wraps came off the final production version of the 2014 Royal Enfield Continental GT. More a '60s bike made with modern production techniques than a retro, it should more accurately capture the classic cafe racer riding experience than anything else out there.

We've been seeing versions of this bike since January, 2012, when the Xenophya-designed concept debuted at the Delhi Auto Expo, tracking that bike's evolution to the production model you now see here.

Royal Enfield produced motorcycles in England until 1967, opening a concurrent factory in Chennai, India in 1957. When the UK company went bust, the Indian factory stayed in business, churning out essentially the same old bikes from 1950s and '60s England. While this new bike is thoroughly modernized, complete with a new engine and frame, it shares its basic architecture with Enfields of yore. Along with other throwback brands like Russia's Ural, China's Chang Jiang and 'Murika's Harley-Davidson, this is as close as you can get to buying a classic motorcycle, today. It should be noted that, while Harley did away with its kick start in 1967, Royal Enfield has retained its, allowing riders to chose their thumb or foot to start the bike. How's that for freedom?

Designed from the ground up as a cafe racer, Enfield commissioned renown English tuning firm Harris Performance to design its double cradle frame and basic chassis geometry. That should ensure a sweet handling little bike.

Outright performance will be limited though. The now-larger 535cc single-cylinder retains a very low compression ratio of just 8.5:1, meaning it puts out a meager 29.1bhp at 5,100rpm and 32lb-ft of torque at 4,000rpm. Kerb weight is said to be 405lbs with the fuel tank 90 percent full.

The upside of such limited performance? The Continental GT should meet the European A2 license tier for new riders. That puts it in competition with bikes like the 47bhp, 420lbs, $5,500 Honda CB500F. No price has yet been announced by Royal Enfield, but its current range starts at $6,000. US availability is expected to begin early next year.

- Low maintenance and easy to work on

- Great base for customization

- Seat cover doesn't actually cover anything, the Continental GT is single-seat only

Despite those reservations, the Contintental GT is actually a strong sign of promise from the Indian brand. Not only is this the first all-new motorcycle in 50 years from Enfield, but it's stylish, show's they're willing to look outside the company for influence and expertise and generally displays a strong grasp of the world motorcycle market and their place in it. Royal Enfield currently produces 175,000 motorcycles a year, but hopes to expand that number to 500,000 within the decade. As such, the Continental GT is a strong start.