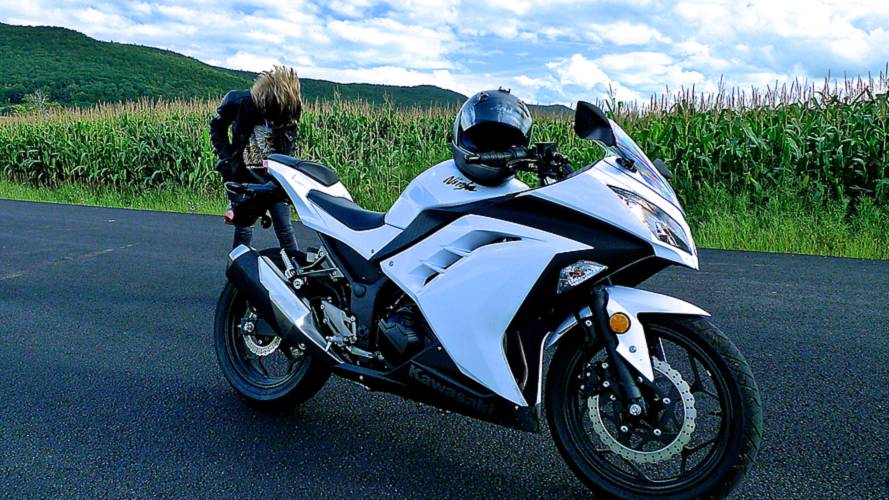 In this 2013 Kawasaki Ninja 300 review you'll learn why this is a great sport bike for first time riders.

Kate started riding bikes a couple years ago, only to take a forced absence for a while due to injury and the subsequent lake of confidence it caused. What better bike to get her back into riding than the 2013 Kawasaki Ninja 300? And who better to review a small, confidence-inspiring bike than someone who was looking for exactly that? — Ed.

Underneath the aggressive new plastic, the biggest mechanical change between the old 250 (around since 1983) and this 300: an increase in stroke from 41.2 to 49mm ups engine capacity to 296cc. That means power grows from 31 to 39bhp and torque from 16 to 20lb/ft. There’s also ABS and even a slipper clutch, so not only will this new bike be faster, but it’ll be safer and easier to ride too. Oh, and fuel-injection, for reliable running in all conditions.

The slipper clutch may sound less exciting and possibly a bizarre inclusion on such a small, basic motorcycle, but it should be a safety aid too, particularly given that many Ninja 250s find themselves being used on city streets and in a variety of weather conditions. Like other similar devices fitted to many high-performance motorcycles, the Ninja 300′s spreads the clutch plates if back-torque is causing the rear wheel to lock or skid while downshifting. Imagine the benefits for ham-fisted new riders trying to gain confidence while riding in less than ideal conditions. That clutch also gains an assist function, dropping clutch effort by 25 percent, again a boon for new and urban riders.

The frame has been revised for increased rigidity, combining with the wider, 140-section rear tire for a claimed increase in rigidity.

Other than that stroked motor, new clutch, the Ninja 300 is largely identical to the bike it replaces, except on the outside, where its looks now emulate the ZX-10R and ZX-6R.

When I bought my first bike a couple years back, I did so on bad advice to get something with at least 500cc. I was living in Manhattan at the time, with very little knowledge of motorcycles and limited funds. So I ended up with a old, borderline basket case. It was awful, but I was hooked.

My cojones to noodle ratio was a bit out of whack, so I soon moved up to a liter bike, before deciding to try motocross. A freak accident on an MX track caused some serious injuries and kept me from riding for a year. Learning to walk again was difficult enough, riding took longer.

I first saw the 300 at it’s Times Square introduction last year and thought it would be perfect for me.

For starters, the seat height is even lower than the 250’s, making stop-and-go traffic way easier for shorties like me. Plus, the sexy new bodywork just looks great. It looks fast.

Riding around with my man, who has a much meaner, more powerful streetfighter, our non-rider friends always think my bike looks faster. And the truth is, is is faster than most other bikes like it, including the Honda CBR250R and the old Ninja 250 it replaces. 47ccs really does add up, making a major difference at highway speeds and allowing me to use the bike to commute between the city and our place Upstate.

There, I live on a mountain surrounded by good, twisty roads. Even my ride to the grocery store feels like a mini TT. In corners, the light, 379lbs curb weight combines with the narrow tires to make it more flick-able than most larger sport bikes.

The brakes are another story though. Having grown accustomed to the powerful dual discs of big sport bikes, I keep longing for their stopping power and feel while riding the little Ninja. On the plus side, the need to allow for longer braking distances has made my riding smoother. Something aided by the slipper clutch. A feature not normally seen on smaller bikes, it makes my hamfisted downshifts fairly seamless and prevents the rear tire from locking up.

Around town, I managed 57mpg, but that fell dramatically any time I really used the engine’s full performance.

- The bigger engine! With 296cc, this liquid-cooled parallel-twin dominates 250s.

- But it still takes regular octane gasoline, saving you money.

- Adjustable mirrors show what’s behind you!

“The Kawasaki’s brakes left us flummoxed. In past comparisons the 250 Kawasaki rated highly, but the 300’s front stopper left much to be desired.” — Motorcycle-USA

“The new chassis provides more neutral steering feel with no trace of the sensation of falling into corners that I’ve experienced while riding the 250R and Ninja 500. I was also pleased with the enhanced sense of grip and stability that I got from the 140/70-17 IRC rear tire, which is 10mm wider than the 250R’s 130/70-17.” — CycleWorld

It’s amazing what Kawsaki’s achieved by applying a few small upgrades to a 30-year old package. A desirable, fun, affordable little sportsbike. Aggressive styling won’t fit all tastes, but if you’re a budding racer, you wont’ find anything better to advance your skills on.