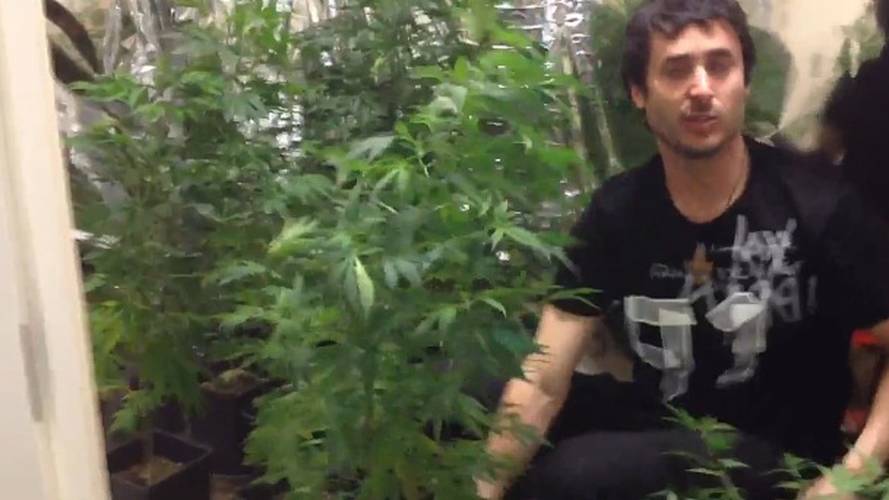 Unless you're one of the half dozen or so people that follows AMA Pro Superbike racing, you probably haven't heard of Johnny Rock Page. Hell, even those half dozen fans probably haven't heard of him. But, anonymity doesn't stop him from being a crazy ass motherfucker, as witnessed by the following press release in which he suspends himself from the series due to his rampant medical marijuana use. ...

Unless you're one of the half dozen or so people that follows AMA Pro Superbike racing, you probably haven't heard of Johnny Rock Page. Hell, even those half dozen fans probably haven't heard of him. But, anonymity doesn't stop him from being a crazy ass motherfucker, as witnessed by the following press release in which he suspends himself from the series due to his rampant medical marijuana use. Don't believe his own accusations? Don't worry, there's video.

The follow press release is unedited, appearing exactly as it was distributed:

Attention United States of America, first a BIG shout OUT and special thanks to my new inspiration Michael Phelps. It was great getting some hang time with you on the stage at the Labor Day Encore XS party. You and David Guetta were loaded with energy and poured it onto the audience, so cool!

Not sure if you got to meet Deadmau5, his eyes were jaded, he looked out of it, he’s the guy with that wild green Space Invader tattoo on his neck. Two hours before meeting Deadmau5, I just got through asking model, Marlow DeVonne what that guy looked like without his Deadmau5 helmet on, and then we run into him while were walking in with Paul Oakenfold, Orock Orock, and Kevin Collins my buddies, interesting time, lots of it! Anyhow, It was so cool getting some hang time with you, and sharing our incredible sport of Superbike racing in America. We would love to have you out as a guest, consider this your invite as the “word” will travel it’s way to you my friend. Sorry #79 Blake Young, all I had was this recent photo by Darin A. Smith.

Phelps, I’m so sorry to hear of all the scrutiny that you went through, it’s totally ridiculous, I’ll take the torch from here and we’ll see what America does with me, hear we go...

Continuing on, attention to, All PRO Athletes, AMA-PRO Racing Staff, David Atlas, Superbike Race Fans, ADR Racing, team owner David Anthony, my friends, sponsors and daughters Madison and Alexa who I have to report to and to all the people who believe in the God that gave us the ability to communicate, as we are doing now, can I get an “Amen”, thank you!

I am turning over this portion of my future Superbike Life & Style to the AMA and placing myself on indefinite suspension from the AMA for the use of weed during a tiny window of the race season.

Even though it's medical weed, ya right, I’m guessing that I’m in violation according to the AMA-PRO guideline rules. For what ever it's worth, I do have a medical legal card issued by the state of Arizona, I'm not sure what even that means to you or anyone? I have not had weed in my system prior to a race recently. I received my medical card last year around when I announced my retirement. With lot’s of careful research then experiencing it's medical benefits first hand. May I respectfully plead the 5th and ask for my medical reasons to be held private, however weed seems to offer a lot of hope and cures to what I’m dealing with.

It’s actually quite a beautiful plant and I have to tell you, I’m blown away at the botany of it. Talk about a beautiful fun plant to grow, and learn about all of it’s various strands and benefits.

After learning so much about weed, and of course enjoying it’s various strands, all within the scope of my license, the rabbit hole kept pulling me in deeper as I connected with the plant that seems to be loaded with so much endless value. My curiosity became interested as I discovered it's medicinal side and it's insane massive controversies. I feel like my energy is in the center of it's challenges trying to understand, so I tried, and got first hand involved and I guess I just decided to be a test pilot to see what would happen to me as I discovered for myself, the truth about weed as a Man of God, Family Man, Pro Athlete, and as some of you know I’m running for President of the United States of America as a fill in ballot for 2012.

On that note, I apologize and ask forgiveness from my fellow racers for the part that I guess may be unknown to Man that made it illegal in the first place that could potentially could cause harm. Anyone who feels I put them in arms way by having weed in my system, my apologies; it takes like 30 days to get out of from the day you take it. I’ve raced with several prescription drugs over the course of my career trying different things in my life to feel balanced, I’ve never felt pressure from prescription choices, until medical weed came along. I’ve never tried cocaine and I don’t sleep around anymore, as I am waiting to have sex If I ever marry again. I feel like I’m the best version of myself after being crushed to nothing and getting rebuilt by God, however I sure feel pulled in about four pieces and this letter needed to be written to keep in harmony with a good conscious as I've worked so hard to get to this point.

On that note, I'll continue training, staying in shape, hoping to hear back publicly from the AMA in a timely manner with the goal of acceptance as I AM, a card carrying member. If anyone wants to voice, please feel to talk openly. I hope the World, the United States of America and the AMA who I absolutely love has room for a guy like me. I still want to race, however I don't like being pulled in so many directions, the Federal and State division has my energy feeling torn inside, and now the ball is in your court as much of my career is in your hands.

In final, I couldn't come to the New Jersey Superbike race feeling in good spirit, even thought I'm sure I could get fake pee, a wizzenator, or I'm sure I probably wouldn't be tested. This is one of those moments where I just may want to crawl under a rock and die, sometimes this world sure is a confusing time live in with all it's rules and regulations between Man and how he's to live his life trying to move about as peaceful as possible during his lot of time, all while trying to make a difference and hope to live a life that counts in some small fashion. I mean this sincerely and in a Non-Suicidal way so none of you worry about me. I’m in a good place in life, thank you God!

With that being said, it was my biggest dream to be President of the United States of America and be an active MotoGP, World Superbike, or U.S. Superbike racer for 2013.

Dream Big Anything is Possible

“Don’t tell me the sky’s the limit when there are footprints on the moon, and we have landed on Mars.” Paul Brandt & Johnny Rock Pagejo