The Return of the "Coolest Race on Earth" 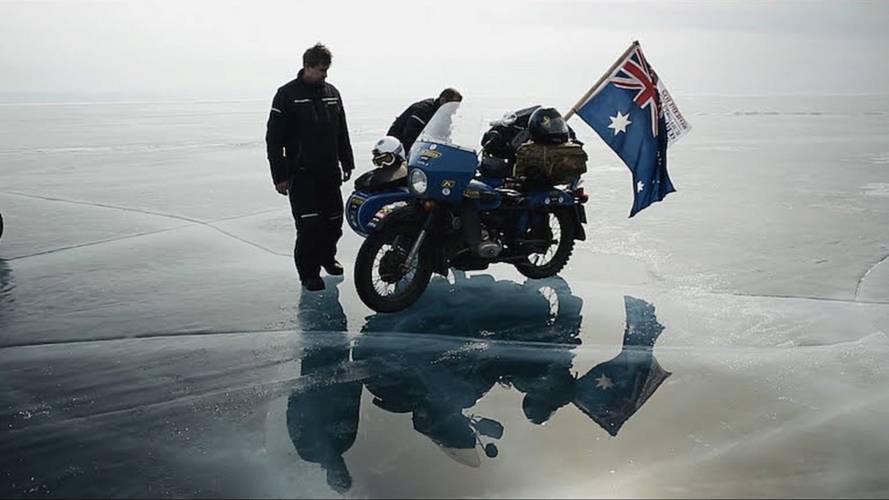 An 2,000km endurance race across Sibera in subzero temps on old, busted Urals sounds like a blast, right? Right!

After a year-long hiatus, the extreme cold-weather race The Ice Run returns to the frozen surface of Lake Baikal.

Fun is subjective. To me, riding a sport bike on the (sometimes) smooth tarmac of a Southern California road (or track) on a warm day is about as fun as it gets in my book. There are others, however, who have a markedly different take on what they consider a good time on two-wheels. Enter the competitors of The Ice Run. The Ice Run is an extreme cold-weather event in which two-person teams -  one driver and one ‘navigator’ in a side-car, although you can swap over as much as you want - compete pilot sidecar-equipped Urals over 2000km (1,242.7-miles) across frozen Lake Baikal in Russia. Lake Baikal, if you don't know, is the oldest and deepest lake in the world with a depth of just over a mile to its bottom. Temperatures on the frozen Russian tundra that the race’s fans and enthusiasts call a venue reach around very nippy -20 degrees Celcius, or -4 degrees by Fahrenheit's thermometer.

Registration recently opened opened for those wishing to - and quite frankly crazy enough to want to - take part in the sixth Ice Run in March of 2018. In addition the event’s reputation for being as rugged as it is frigid, it’s also known for its raucous vodka-fueled parties each night of the twelve-day Eastern European event. Like the TT or The Race of Gentlemen, The Ice Run very much has its own personality and vibe, with the event seemingly being more about the sum of the entire near-two-week experience than the actual racing itself. The Ice Run possesses more of a festival atmosphere rather than a serious business race atmosphere, with an array of entertainment throughout the event's two-week run.

The fact that the race is run on Urals definitely adds to the fun and character of this wild event. Those involved appear to appreciate the Ural’s lack of reliability and what that brings with it, national pride certainly isn’t the only reason race officials don’t want this race run on the objectively superior BMW R71 (Hey! HEY! You watch you moth about Urals, mister -Ed.). The race's recent press release even included a quote from an unknown person connected to the Ice Run reading:

“What can I say about the Ural? They are shit, but magnificent at the same time.”

The press release went on to describe the Urals utilized for the event’s first races as: “Built like a tank, slightly rusty and often unreliable. Obviously the all-round perfect Siberian adventuring machine for facing over 2,000km of frozen rivers, lakes and roads at -20oC.”

While there is no one set route, teams are given a collection of GPS co-ordinates for fuel-drops, as well as a list of particularly hazardous or treacherous areas throughout the lake's 12,000 square miles of ice, forest trails, and rural ice roads. Like you’d imagine, much of the lake’s frozen surface is flat and smooth having been polished by the harsh winds, however some areas can resemble what event officials describes as: “A freshly ploughed field, with great tombstones of ice to navigate around.” As part of the race’s nature, those competing often have to spend some time making fixes to the Russian scoot. All of this, of course, in freezing temperatures which makes the race unique and something of an endurance race, just not in the usual sense of the word.

Operating a motorcycle - with a sidecar - on ice is a process that, understandably, takes some getting used to. The bike can do unexpected things compared to other riding applications.

“When you put the brakes on, not much happens except the bike pulls really hard to the right," said Ice Run Chief Katy Willings. "Then the steering goes funny, the brakes lock up and you skid at a strange angle, usually straight into whatever it is you’re trying to avoid.”

Luckily, for anyone interested in getting involved - but apprehensive for obvious reasons - you can be at least partially reassured by the fact there’s three days of rolling training and mechanical briefing on the lake, so new competitors can learn the basics of how to pilot and maintain a Ural motorcycle in subfreezing weather. Other necessary skills for taking part in this event are also taught such as how to camp in the cold and how to pull someone out of the ice.

For anyone interested in getting involved, you can visit the Ice Run page on the Adventurists.com website for more details. Along with the race, the Adventurists have raised tons of cash for various good causes.

“Adventurists teams have raised millions for charity and by supporting Cool Earth, you'll be saving the world one rainforest at a time. Not because we’re tree hugging sandal weavers, but because the world would be shit without them.”

READ MORE: 2014 Ural Gear-Up Sidecar Review, Video of the Day - The Ice Run, How I learned to Stop Worrying and Love the Sidecar