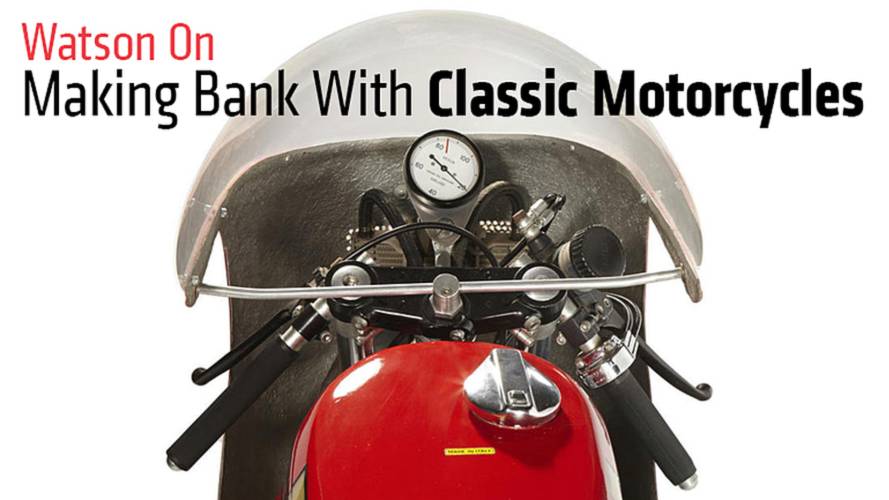 If you own a classic Ducati, Harley-Davidson or Indian motorcycle, now might be the time to consider selling it, as it seems that prices are on the rise for the first time in the world of classic motorcycles.

Last week in Las Vegas, international auction house Bonhams staged its fourth annual motorcycle auction specifically for collectible and rare motorcycles and more than $3.3 million worth of historic bikes went under the hammer.

Bonhams described it’s Las Vegas event as one of the most successful motorcycle sales it has ever staged. But perhaps more worryingly from a financially challenged bike enthusiast’s perspective, it also referred to the cross-section of bikes that were offered as “investment-worthy motorcycles”.

This to me suggests that many of the bikes sold on the Vegas strip were being bought not to be used and ridden but purely being acquired as assets that will be traded in the future for even more commanding figures. They’ll disappear into huge collections and never be seen by the likes of mere mortals again, except at the next international motorcycle auction.

There’s nothing new in all of this. In the car world it has been happening for years and there have been over-priced cars, record sales at auctions and then just when the next Ferrari reaches an unimaginable figure, the market crashes. It did this spectacularly in the 1990’s and then took the better part of 15 years to stabilize, and now is seriously back on track with record prices for rare cars.

But it would appear the collectors have finally gotten wise to the fact that motorcycles are a good investment. Admittedly last week’s examples that went under the hammer were pretty special but they went for astronomical prices that blew my small mind.

There were a series of important and significant Ducati racing bikes from the famous Silverman collection on offer, including a 1973 Super Sport 750 ‘Green Frame’ that went for a record breaking $137,000.

While a really nice Ducati 900 NCR from 1978 that had not been touched since it left the factory and was effectively in new condition grabbed an eye-watering $175,000. Yeah you read that right.

An unrestored 1940 Harley Davidson EL, which someone had painted green early in it’s life, was snapped up for a whopping $159,000. That too was a world record for a bike of this type. It was a nice Harley and had some interesting history too. But it was not the first one built or the last one off the line and Elvis Presley had never owned it. I think $40,000 would have been a more sensible price.

For reasons beyond me, whenever I mention the name of actor Steve McQueen to a male friend, he goes all coy and glassy-eyed and says, “That guy was so damned cool”. Clearly anything that McQueen even touched and that comes up for sale in an auction house can do no wrong either.

But if my friend wanted to own a piece of McQueen he would have had to part with $126,000 in Las Vegas for the 1923 Indian Big Chief motorcycle with Princess sidecar (perhaps the best name ever for a sidecar) that ‘Mr. Cool’ once owned.

According to the auction literature, the Indian was personally restored for McQueen by artist Von Dutch and this motorcycle and sidecar combination attracted what Bonhams described as ‘passionate bidding’ in Las Vegas.

Ultimately, it went for a world record price to a private American collector who also decided to snap up McQueen’s 1935 Indian Chief, which was also on offer, for a cool $80.500.

The head of Bonhams international motorcycle department, Ben Walker, confirmed after the auction something that I really didn’t want to hear: “Once again the season opening and highly anticipated sale in Las Vegas proved to be the place to sell investment-worthy motorcycles."

For me this is the beginning of the rot. That anonymous auction buyers are happy to pay six figure prices for interesting motorcycles signals a change in the classic bike world. They will take them well out of our reach and into dimly lit, hermetically sealed, security guarded warehouses where over they next few years they will sit while increasing in value. Effectively they have become a commodity like an oil painting or an ingot of gold.

Bonhams is holding another auction in a few weeks in Paris. Up for grabs will be two Harley-Davidson motorcycles donated by His Holiness Pope Francis along with several really interesting and unusual bikes. In April, Bonhams moves to England and another packed motorcycle auction with the star lot being an unmolested 1939 Brough Superior SS100 that has been in the same family since 1961. It’s going to be one crazy year.