A brief conversation with Michael Czysz 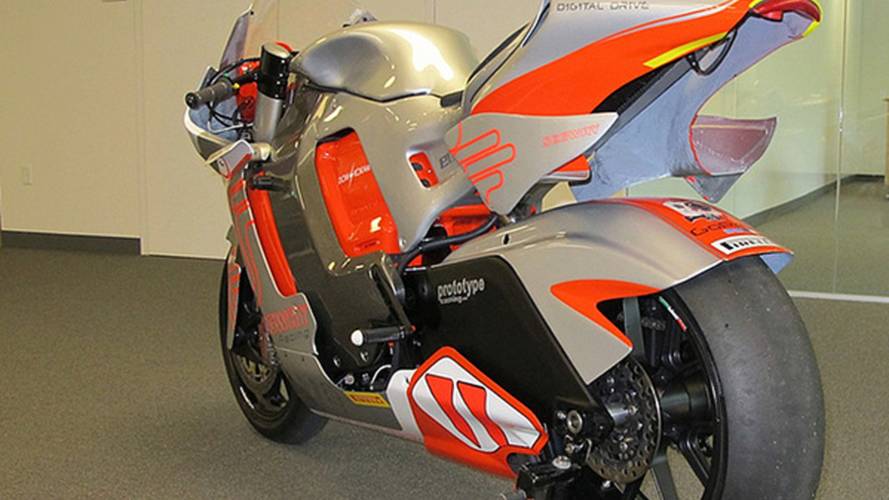 Last week, I went over the 2012 Motoczysz E1pc with Michael Czysz himself. I met him in Boston at the launch of SolidWorks 2013, which is the latest version of the software that Motoczysz uses to design their bikes and spent a few minutes talking design and aerodynamics. Here's that conversation. Update: full, 40-minute audio interview added. MotoCzysz uses SolidWorks for an astounding range o...

Last week, I went over the 2012 Motoczysz E1pc with Michael Czysz himself. I met him in Boston at the launch of SolidWorks 2013, which is the latest version of the software that Motoczysz uses to design their bikes and spent a few minutes talking design and aerodynamics. Here's that conversation.

MotoCzysz uses SolidWorks for an astounding range of tasks, from the initial design to refining the bike in a virtual wind tunnel with computational fluid dynamics, which can simulate aerodynamic flows and calculate heat transfer from the radiator, brakes, and motor. Experimental parts needn’t be built and sent to an actual wind tunnel. The parts are also stress-tested virtually with finite element analysis (FEA). Still not amazed? SolidWorks can figure out the shapes of the molds for the parts and send them to a program that can work out in SolidWorks, mold shapes for the carbon parts can be calculated and sent to CNC machines for manufacturing. It’s a far faster process than that of decade ago.

Nick: "So many motorcycles are styled just to look great, but the aerodynamics bits on this one are functional and that in itself makes it look good."

Michael: "That’s the nature of styling, it’s the exercise of just… style. In this case, there was an aesthetic I put on everything, but we had very little time to do styling. We were focusing on the packaging and doing aerodynamics. The biggest thing was moving the radiator to the rear of the bike, and trying to balance the pressure at the front of the bike and the rear of the bike."

Michael: "Yeah. Between the front and rear of the bike. That’s in fact, how you address aerodynamics."

Nick: "Because with equal pressure there would be no pressure drag?"

Michael: "Ideally yes. So we have significantly higher pressure in the front and significantly lower in the back, and the faster we go the more extreme that gets, and it’s much more costly to overcome that high pressure in the front. So we’re trying to reduce that high pressure and elevate the low pressure in the back.You want to do that as directly as possible, and you have to be careful because sometimes you start going down these paths to a goal, but it would be easy to add as much resistance or friction in the process of trying to balance the pressures than . It is a good step in the right direction, but I think there is further work to do. It is not easy dealing with and also trying to put as many batteries in as possible, because batteries are relatively dense and opaque. They’re a dense, solid, opaque material. You’re trying to shove as many things that block the air into the bike as possible, while still maintaining air through the bike. So there are obviously some conflicts."

Nick: "It’s funny to think of doing aerodynamics by trying to make the bike transparent to the air and equalizing pressures versus making it slippery. Ultimately you’re trying to equalize pressure and make the bike invisible."

Michael: "Well, invisible or transparent is a word I used a lot while designing the bike, because the rider is dynamic. If you’re just going to Bonneville and had the rider in a fixed position, you could build elements around him that tried to equalize the pressure or streamline the bike. But in roadracing, the minute he sticks out his knee, or slides off the saddle, or drops his head, everything changes. What I didn’t want to do was present new barriers or new walls when the rider was out of position. That’s why some of the wings have different looks. When the rider is the right spot, that’s good, but when he opens his knee, we don’t present anything new. We may lose the aero benefit, but we don’t add additional aero drag."

Nick: "And you’re shielding his knee?"

Michael: "No. For example, in the rear, when he’s all tucked in, the rear and the wings all make sense. He slides off that to go around a corner, and he slides off the seat and he’s opened his knee up, if all that would have been…"

Michael: "Well, you lose the wing, but what’s more important, if this were a typical streamliner, that would be all solid through the tail. This would be all solid through here. When the rider is tucked in it all makes sense, but as soon as he slides off and opens up his knee, this would be presenting new walls. So what I wanted to do is not add or present any new barriers through his normal dynamics."

"In this case back here, the best example are his legs. Try to take off the leg, return the air to the lowest pressure, with all these shapes. When he opens up his knee, we lost some of that ability, but we haven’t presented any new surfaces. That’s why it looks like things are attached, and why it doesn’t have that integrated look that I could have given it. Then we would have introduced a lot more perpendicularity and a lot more high pressure."