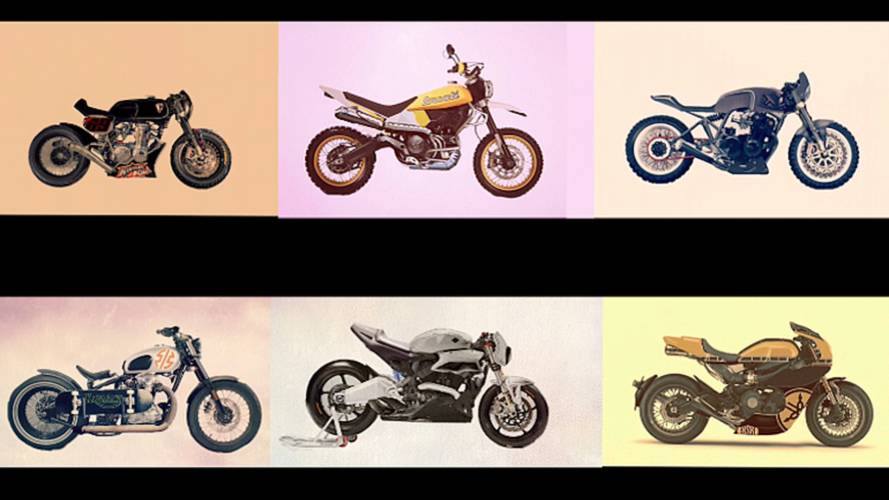 Tim downloaded a really cool imaging app then immediately fell down a rabbit hole of motorcycle design. See how he did it.

How dabbling with a Photoshop-esque app lead to the designing of a handful of concepts and customs.

It turns out you don't always need a fully stocked shop and years of experience To design a custom or concept bike. I'm currently resourcing the parts I need for my next 1970's CB cafe build. Because I want a more modern swingarm – one with a monoshock – and a sportier looking tank with knee dents, I've had some trouble landing on what I want the tail section to look like. It needs to work as a cohesive sum of parts with a consistent visual theme throughout the bike, which it turns out can be tricky when you're name isn't Roland Sands. Since I'm not, in fact, Roland Sands, I downloaded a really cool app called PicsArt to help me visualize my new bike.

PicsArt, also known as PicsArt Photo Studio, is a combination image editing, collage, and drawing app with a side order of social networking. It's a bit like a cross between Photoshop and Instagram – users can take pictures, edit images, draw with layers, apply different filters and effects, then upload the images to share with the PicsArt community. Images can also be cross-platform shared on other networks like Facebook, Twitter, and Instagram. There's even a chat feature that allows users to team up to share images and ideas.

If that sounds pretty simple, it is. I'd taken a few elective Photoshop classes in middle school and still have a tenuous grasp on visual editing. I thought a solution to my CB build's design problems might be remedied by digitally trying out a couple ideas before committing to anything in the real world. So after a bit of searching, I downloaded PicsArt to my phone and spent around half an hour learning how to use it. It has a relatively simple and initiative interface and, my previous photoshop experience aside, I'm confident anyone who's vaguely technologically literate would be competent using this app in less than an hours time.

Sometimes it can feel impossible to settle on a specific component. (Donor: H-D 883)

I quickly found the app to be incredibly helpful for design purposes. With a few clicks, drags, and swipes, I could download photos of various tail sections and slap them onto a digital rendering of my CB. Because I know the measurement of my donor bike – and many aftermarket tail sections, as well as tail sections from existing models being sold online typically include measurement – this allowed me to get a sense of scale so I'd truly know what these parts would look like on my bike while still having a choice of what angle I'd want them mounted to the subframe. I went through a dozen or so "universal" cafe tails, along with tails from some modern Japanese sport bikes, and even experimented with a Panigale tail. (Spoiler alert: it looked terrible).

I was actually going for a design based on the military ground vehicles in the Halo video game series. (Donor: BMW R nineT)

Just because I allowed my imagination to run a little wild doesn't mean software like this isn't an extremely valuable tool for builders. Having the ability to get a sense for a visual theme, to test different paint schemes, or to see how various components would look on a build without ever having to invest any money or wrench time is pretty amazing. In today's technologically advanced world we have access to all kinds of great tools, and sometimes it's just a matter of learning how to exploit those tools for your needs.

Finding a place to put the RideApart logo was surprisingly hard. (Donor: A miscellaneous Yamaha)

The list of options for digital modifications is literally endless. Exhausts, rims, seats, bodywork, headlights, engine cases, you name it. If it can be changed on an actual bike, it can be digitally rendered within the app. I've found that at times ideas that sounded good in my head turns out to not be so stellar when I actually see them. It goes without saying that this is far preferable to doing the work in real life and then determining you don't like it, not to mention the money required to make that happen or the time it takes to make the parts yourself if you have that ability.

My take on a desert sled. (Donor: Ducati Scrambler)

How I do it

There is no one right way of doing a digital concept. Like music production, it's all about finding what works for you. When it comes to digital moto-concepts, there are more ways than one to skin a cat so to speak. This is just my method, but here's how I do it. First off I either take a profile photo of a bike, or a find a photo of a bike online to use as my digital donor bike. Often you can find stripped down photos of a bike online with just the frame and engine. These are easier to work with than complete bikes, though complete bikes are fine they just require a bit more erasing. From here I start experimenting with gas tanks and tail sections from various existing models or aftermarket companies. I make sure to size them correctly and then begin cutting out the desired part from a photo and pasting and dragging it into position. The whole process is 90% cutting out existing parts, sizing them, and dropping them into place.

Sometimes it just doesn't come at quite right for a reason you can't figure out. (Donor: H-D Sportster w/ Panigale exhaust)

I can also super-impose a duplicate image of the bike over itself and then cut out just the parts I want colored. This creates a new layer I can add color to and then drop over the original image, resulting in something of a digital paint job. Elements such as numbers or tank badges are easy to slap on after a quick google search and some cutting and pasting. Much of the work is intuitive, for example when I'm trying different rims on a bike, I just cut out the new rims and drop them over the original bike photo and then make sure the wheel fits over the original one perfectly. PicsArt also allows me to adjust the opacity of layers, which allows me to make various layers more or less see-through. By doing this, I'm able to ensure whatever I'm working with is the correct size.

My first crack at a bobber. (Donor: Kawasaki W650)

In Pics Art I'm specifically using the "cut-out tool"  to get rid of everything in a photo other than just the desired component. Using the "painting tool" allows me to design my own bodywork, tank, tail section, or sometimes just to fill in little areas between parts to give the bike a cleaner look. Ultimately it comes down to just playing with the software, and because it's so intuitive you should quickly manage to find your own way of doing things.

An example of how I put together one of my bikes.

I would also like to be very clear that I'm aware that I'm taking other people's existing designs of individual parts and slapping them together. Although I have drawn out my own bodywork and whatnot at times, I don't for a second think I'm a "bike designer". I have an enormous respect for shops like Deus Ex Machina who handcraft many of their parts. I just find enjoyment in piecing together my own two-wheeled creations, regardless as to whether or not most of them will ever be built (which most won't).

So, I've found a few things that work well for me that you might want to try yourself.

This is what it looks like when it first starts being pieced together. Here I've thrown a set of old Ducati wheels, a custom seat I drew, and a Bimota YB3 front fairing onto a BMW R nineT.

5. Use a solid color background and look for a donor bike photo (or take the photo of the bike yourself) against a solid background such as a painted wall. This will make cutting out parts easier while also giving you the best possible sense of the shape and silhouette of your digital bike.

6. Do it 'til it's done right. Sometimes it will take a myriad of attempts to find a particular part or area that works with the rest of your design. It can be easy to loose your patience and just settle for a wonky looking final product, but it's a much more enjoyable experience when you finally get it "right".

For anyone looking to dabble with an app with an incredibly simple interface, there is also a free Roland Sands bike builder app that allows user to customize a Harley with an array of genuine H-D and RSD parts. For looking for more tools, features, and options than Pics Art, you really can't go wrong with Adobe Photoshop. There are literally hundreds of photo editing and drawing software suites out there. CAD exists for anyone looking to do some serious design work, but ultimately just exploring the apps and software that's out there whether it be for iOS, Android, or a non-mobile device. Lost of free software exists, find what you like and go for it.