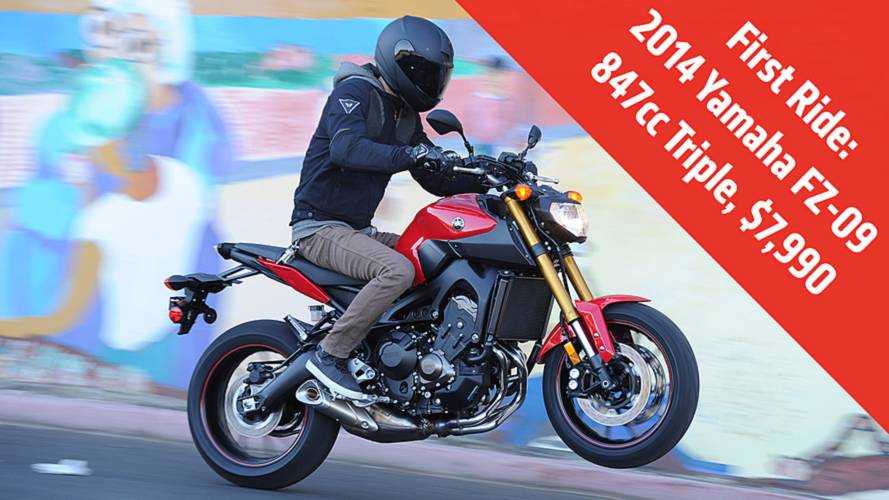 In our 2014 Yamaha FZ-09 review, you'll learn that this powerful superbike, is fun, capable, three-cylinder and, most importantly, affordable.

The most anticipated bike in...who knows how long isn't an absurdly powerful superbike, it's the fun, capable, three-cylinder and, most importantly, affordable 2014 Yamaha FZ-09. We literally just handed it back to Yamaha, here's our first impressions.

Click here to research 2014 Yamaha FZ-09 specs, prices, insurance and compare it to any other motorcycle.

The 2014 Yamaha FZ-09 is completely new, minus the grips, blinkers, and license plate holder. During the briefing they stressed that, while the FZ-09 was built with achieving a low cost in mind, it is not a "parts bin" bike and that they designed nearly the entire thing from scratch while using quality materials. You have only to look at the intricate cast aluminum frame and how it sits inside the aluminum swingarm to witness that.

The 847cc three-cylinder engine is all new and includes tons of cool technology to create an emotionally stimulating ride. For instance, the intake funnels are staggered lengths, which help to produce power fatten the power curve at both low and high revs. The FZ-09 utilizes newly designed 41mm Mikuni throttle bodies, which fire directly down at the valve skirt, allowing a more direct feel between the throttle and rear wheel, while also helping make the engine more compact.

The FZ-09 also uses Yamaha's Chip Controlled Throttle (YCC-T) which is their version of ride-by-wire, as well as Yamaha Drive Mode (D-Mode) variable mapping to allow three different levels of throttle response: Standard, A, and B (A being the sport tuned mode and B, the mellower city mode).

One of the goals Yamaha had when designing the FZ-09 was to make it as compact and light as possible. From the new throttle bodies to the offset cylinder design to the new, stacked, six-speed transmission to the new 3-into-1 exhaust; everything is incredibly compact and it's quite noticeable when you swing your leg over the seat.

Thanks to the three-cylinder engine's narrow dimensions and a frame that goes over, rather than around its sides, the FZ-09 is two inches narrower than the bike it replaces, the Yamaha FZ8. The suspension is KYB at both ends, with 41mm USD forks up front and a horizontally mounted progressive link rear shock (adjustable for pre-load and rebound at both ends).

Brakes come in the from of radial mounted, 4 piston ADVICS calipers on 298mm floating front discs up front (with Brembo master cylinder) and a single Nissan brake caliper on a 245mm disc in the rear.

Compared to the FZ-8, the handle bars on the FZ-09 are 53mm taller and swept back 40mm. The foot pegs are also 26mm lower, creating a more comfortable, spacious riding position and a little more leverage over the bike.

The wheels are 10-spoke cast aluminum items, designed especially for the FZ-09, and are wrapped in either Dunlop SportMax or Bridgestone Battlax Hypersport rubber (both of which we were told were created specially for the bike).

Day one was spent tooling around San Francisco proper. The idea being, this is an urban sportbike, they wanted us to see how it did around town and let me tell you, coming from LA this is a crazy place to ride. It's like being on a roller coaster, but one that you control and that has the ability to fall over. The pavement refuses to stay one consistency for more than 100 ft and the cars aren't big fans of letting you get where you want to go.

Despite all of this, the FZ-09 handled everything we could throw at it with grace. The suspension ate pot holes, cracks, trolley tracks, and 24 degree inclines/declines without problem. The engine is full of torque and made it easy to squirt out in front of an oncoming bus or make a gap ahead, while the brakes do a fantastic job of stopping you when that taxi you're sure can see you decides to pull out anyways.

I was a little disappointed to have to spend an entire day riding in town, but when I realized we had been riding for a few hours and I felt zero fatigue or frustration I realized what a good decision it was on Yamaha's part.

The second day, we rode up the coast on Highway 1 as far as Point Reyes Station. The road varies a ton, from fast sweepers along the water to tight, twisty mountain roads and it's here that we really got to see what the engine was capable of, while also finding the FZ-09's shortcomings.

The engine and gearing are absolutely superb. As someone who has never been great at wheelies, this 847cc triple was the perfect teacher. It didn't pull huge accidental wheelies like the Dorsoduro, but those could be recreated with ease without having to yank back on the bars. First gear felt tall and I found myself actually riding in it for huge sections of the coast road, enjoying the higher RPM range.

That is, until I realized that a much smoother ride could be had in 3rd gear. Unfortunately, the fueling on the FZ-09 left me feeling frustrated and my confidence a bit shaken and I found the only way to transition from closed to open throttle smoothly was to keep it in a higher gear and let the torque do the work. This seems to be the case with Yamaha sport bikes and it was the same complaint we had with the R1. When you need to be smooth and careful, the fueling is abrupt and jerky. Not good, Yamaha.

The suspension, while great around the city, was also not great for fast canyon riding. I bounced and skipped off of uneven road surfaces and felt the front end lift and shimmy under hard acceleration. Blame overly soft front forks that dive under braking and get upset by both cornering Gs and bumps.

Still, while I struggled to ride at a very fast pace, I was still having fun thanks to that great three-cylinder motor.

The brakes, while lacking ABS, inspire confidence and have good outright stopping power.

The slender frame and lack of an unnecessary weight make this an incredibly easy motorcycle to navigate through difficult areas and tight traffic.

Aesthetically, the FZ-09 fascinates. I actually prefer the red version; the bright paint is used sparingly, contrasting the strong mechanical elements. It really does need a fender eliminator though.

Yamaha will offer a number of aftermarket pieces to customize the FZ-09 or help make it fit your needs. They even have soft side bags you can add to make the FZ-09 tour ready.

The jerky fueling means you have to back off the power by using B mode and a higher gear to retain control. Especially a shame when you consider how willing the motor is otherwise.

Suspension that gets upset by every bump in the road is equally disappointing.

Both these problems combine to artificially limit the FZ-09's pace.

The Yamaha FZ-09 has an MSRP of $7,990 making it cheaper than pretty much any of its competitors. The Triumph Street Triple starts at $9,399, makes less power and torque, but does have usefully good fueling and suspension. The Honda CB1000R makes just 10 more horsepower and 7 more lb-ft of torque, but costs a whopping $11,760 while being plagued by similarly too-soft suspension. The 136 bhp Kawasaki Z1000 is considerably faster than the FZ-09 in a straight line, but is out-handled by the Yamaha and costs $10,999. Perhaps the nearest competitor in terms of fun is the Ducati Hypermotard, but that thing is a whopping $11,995.

The price difference between the FZ-09 and any of its competitors should easily pay for rebuilt front forks and a power commander while leaving you with a couple grand in your pocket to pay for gas and tires.

Despite the fueling and suspension issues, the Yamaha FZ-09 is the naked sportbike I want to own. It's such a complete package, performing well in town, on the freeway or on a good mountain road. While we hope Yamaha addresses the fueling issues on this and most other bikes in their range, adding something like a power commander and swapping the front suspension really isn't all that difficult and would make this pretty much a perfect package. And that's before you factor in the $7,990 price tag. In an age when value is at the top of everyone's priority list, the FZ-09 is on the money.