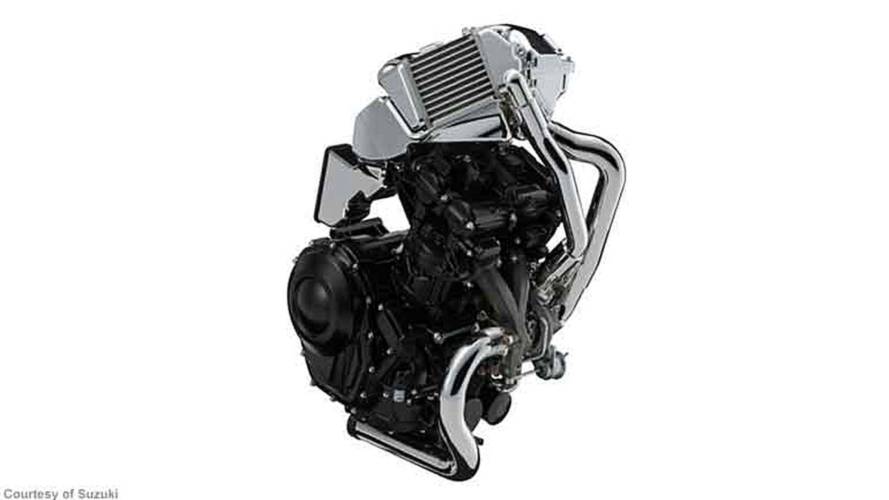 Can it be true? Is the return of the Suzuki turbo on the horizon?

The persistent snoops over at motorcycle.com have uncovered some new filings at the U.S. Patent and Trademark Office showing a turbocharged Suzuki engine. The parallel twin in the drawings is similar to the XE7 turbocharged engine the company displayed at the Tokyo Motor Show two years ago.

Fans of forced induction (no pun intended) will recall the Suzuki XN85 Turbo of the Eighties, when all the Japanese big four were appending exhaust-driven pumps to various engines. The curiously-labeled XN85 (since it displaced only 673cc) was widely considered the best of the bunch. Suzuki had modified the GS650 engine slightly, with the turbo’s boost of 9 psi upping horsepower to 85 (ah…) and top speed to just over 130 mph. The edgy Katana styling set the Suzuki apart from the other contenders, and it handled fairly well at just under 500 pounds.

The twin in the trademark drawings indicate a more compact package, though it appears the displacement will be in the 600cc range. The illustrations show a pair of balance shafts to modulate the parallel twin’s inherent vibration frequencies, and what appears to be a fairly conventional sportbike configuration. Companies regularly file trademark applications of course, but not usually for designs still in the concept stage. Will we see a middleweight Katana-like Turbo sporty in the near future? And if so, does it herald a new era of inductive performance? Factory superchargers perhaps? We shall see.