Why did KTM photoshop damage out of the 1190 Adventure photos? 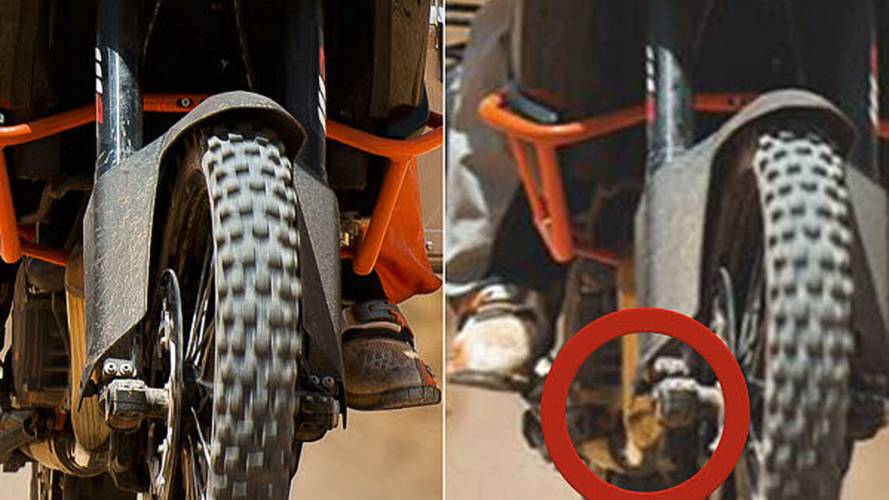 Last week, a couple eagle-eyed readers spotted a big ol' dent in the KTM 1190 Adventure's exhaust. You can see that dent clearly in the image on the right. But the image on the left, downloaded from the company's press site this morning? Nothing of the sort. They're clearly the same shot though, so what gives?

Here's another example. Again, the image on the right was downloaded during the bike's Intermot debut last week while the one on the left was downloaded this morning. Both downloads came from here. Clearly the same photograph, one clearly shows damage, in the other, that damage has disappeared.

KTM hasn't removed the damage from all the photos. The above, for instance, comes from today, but that dent is clearly visible.

And it's been less than skillful at Photoshop in others. Here, the dent has been replaced with a big black smudge. Bet that's not on the Powerparts options list.

So what's going on? Surely the kind of big, burly customer who'd be in the market for a big, burly adventure bike won't mind seeing a little ding. After all, that's to be expected if such heavy bikes are used in the exaggerated manner displayed in these photos, right?

It's all about maintaining the illusion that large adventure bikes — the 1190 Adventure R in these photos weighs 518lbs (wet) — are actually capable of doing what you see them doing in ads and press shots and promo videos. Don't get me wrong, technically they are, when fitted with dedicated off-road tires and ridden by a pro, but these kinds of big jumps and big slides are at the extreme limits of the machine's performance envelopes. Ride yours like this and it will end up on the ground, this KTM did, despite being ridden by a pro.

Essentially big touring bikes with tall suspension, ADV bikes are much more commonly going to be used for covering long distances at a relatively sedate pace, whether on-road or off. That's not to say they can't go places, just that they don't often get there while catching a foot or more of air or sliding the rear at angles approaching or exceeding 45 degrees. Most owners aren't going to be pro enduro riders strong and fit enough to muscle a 518lbs bike around at the limits of its performance over long periods. But, calmly and competently crossing terrain at a pace that can be continued for hours or days at a time, often in harsh temperatures, while taking in the view and the smells and leaving a little extra in reserve because you're so far from help doesn't translate well to marketing that needs to convey an emotion or an experience in a split second. Neither does the absolute need any of these bikes have for significant aftermarket crash protection and more aggressive rubber.

Hello Touratech? Yeah, do you have any sump guards for the 1190 yet? Great, can you expedite shipping? Just got one and I need to get one on there before I can go ride it...