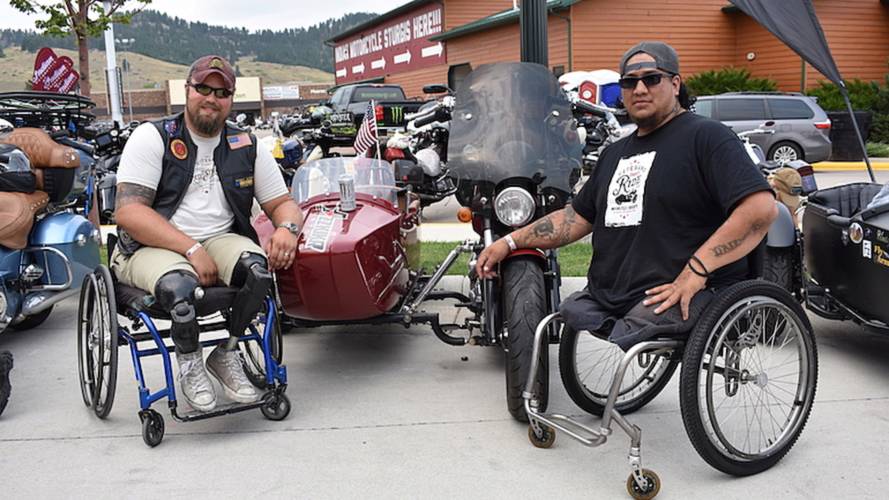 We follow a group of recovering veterans as they arrive in Sturgis after an epic road trip.

Three years ago, David Frey – or, "Indian Dave," as he is affectionately known in the riding community – did a solo ride to the Sturgis Motorcycle Rally. By coincidence, the former paratrooper stumbled upon a person who had served in his same unit and, as you might expect, talk soon turned to current affairs – in particular, the veterans returning from service in Iraq and Afghanistan. David traces the idea for the Veterans Charity Ride back to that moment.

The annual Veterans Charity Ride road trip to Sturgis provides motorcycle therapy for veterans who have been scarred either physically or mentally by their time in service to the country. For a guy who grew up on motorcycles, Frey says it makes perfect sense.

“When I had a realization of what motorcycles could do for my brothers and sisters," Frey said. "I immediately came home and talked to my film director pal, and I talked to my wife. I said to them: 'I’ve got this idea.'"

The team pulled together resources and found a contact with Indian Motorcycles – former head of PR Robert Pandya – who was eager to support the initiative.

Indian became such a recognizable sponsor that most people don't really differentiate between the two organizations, assuming that Veterans Charity Ride was started by Indian. Dave's not too upset by the connection

" now not only a friend and a supporter but a personal mentor to me to help grow the organization," Frey said. "You see what they’ve done with Indian Motorcycle, and he’s helping us do that with Veterans Charity Ride.”

"It gives them an experience that rehabilitates and reignites that flame that they may have never thought they’d get back. That’s the prize,” Frey explained.

READ MORE: Chasing a Legacy: We're There as Burt Munro is Honored | RideApart

This year, some 20 veterans – including two recipients of the "Hero's Ride of a Lifetime" (HRL) honor, which pays their expenses – traveled together to Sturgis through six states. Their trip took them through awe-inspiring scenery as well as a number of quintessential American small towns. The two HRL-honored veterans were retired Army Cpl. Joshua Stein, and retired Marine Cpl. Neil Frustaglio (both pictured in the photo at the top of this story). Stein was nominated by a hockey teammate, whereas Frustaglio was nominated by his friend Stein. Both are double amputees who served in Iraq. For Frustaglio, the decision of whether to take part in the epic adventure was a no-brainer

"When you get a text from your buddy saying, ‘Hey, do you want to go ride Indian motorcycles to Sturgis from California?’ You go, ‘OK!’" Frustaglio said. "There wasn’t any question. I mean, let's go for a ride!”

Stein, based in Phoenix, has been working toward earning his motorcycle mechanics degree, so was able to provide unique input for bike customizers Azzkikr Custom Baggers – the group tasked with kitting out this year's bikes for the Veterans Charity Ride. Both he and Frustaglio ended up sharing duty on a Scout sidecar rig, the two switching from rider to passenger at gas stops.

"I had a smile on my face every time we hit the road. It was literally that much fun," Stein said. "The enjoyment of getting back on a bike with my friend and getting back out there on the road. That’s the therapy right there. Get out there and ride, and get rid of the stress. Leaving it all behind us, miles and miles on the road. Motorcycle riding is definitely a form of rehabilitation.”

That's a sentiment echoed by Frustaglio.

“We both love this, this is how we take a break from reality: get out there and get on the road," he said. "To get to go and do that with a bunch of other vets who 'get it;' they understand. We just had so much fun the entire way. When you get a great group like we had it just makes everything easier and better.”

Despite friendly internal rivalries, there's always been a kinship shared by members of all branches of the military, and that closeness often grows stronger among veterans. The veterans on this ride quickly built a trust for each other that allowed some of them to step outside of their comfort zone. Many will return home with a little less stress, and, organizer Frey hopes, another tool for dealing with the challenges of daily life.

“We took 20 veterans who – some of them didn’t even want to leave the house. Some of them didn’t want to be around other people," Frey said. "But because there are other veterans on this, they felt comfortable enough to say, 'OK, well I’ll talk to Dave.' Once I start talking to them... the beginning of trust and security is built up to get what you see today.”

Frey said the process of getting a veteran from the stage of being self-isolated to the point where he or she is riding into Sturgis can be deeply emotional – for the veteran, the veteran's family, and Frey himself.

"My favorite thing is to see a guy or gal that maybe had a frown and some concern on their face for months maybe even years – to melt that and see life coming back and know that I had some part of that," he said.

For my own part is was both humbling and inspiring to meet the veterans who were a part of this year's ride. Frey's got some big plans for the future, so it will be exciting to see how the message of motorcycle therapy spreads over time. You can find out more about the ride at the Veterans Charity Ride website.