Eight Reasons Why Justin Bieber Is a Total Squid 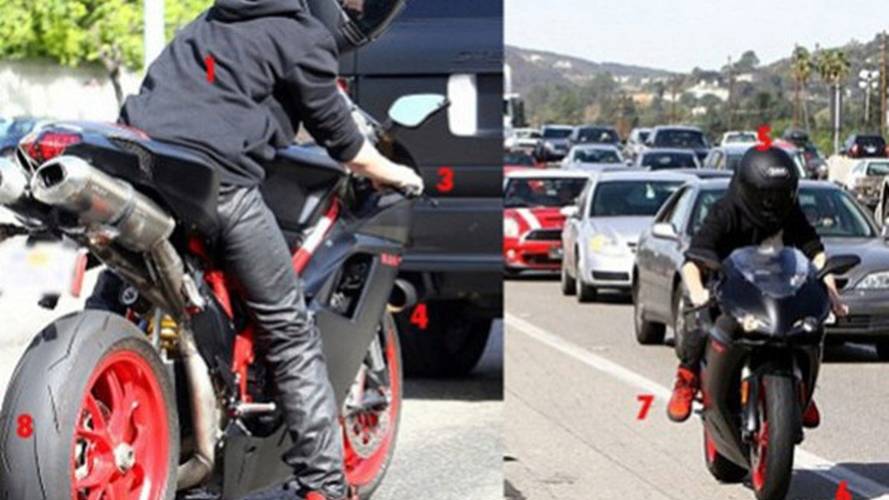 Here are eight reasons why Justin Bieber Is a total squid when it comes to his Ducati motorcycle and riding it around Los Angeles, CA.

Like, OMG! Justin Bieber rides a Ducati! Could he get any dreamier?

Isn't it fascinating, the divergence between image and reality? Yes, 99 percent of teenage girls locked themselves in a bathroom and scrawled "Bieber Fever" all over themselves in Sharpie when these images of the 18-year old dropped. They see a bad ass, but you and I, as actual motorcyclists, see an accident waiting to happen. Here's why.

Urban Dictionary defines the word "Squid" as: "A young motorcyclist who overestimates his abilities, boasts of his riding skills when in reality he has none. Squid bikes are usually decorated with chrome and various anodized bits. Rear tires are too wide for their own good, swingarm extended. Really slow in the corners, and sudden bursts of acceleration when a straight appears. Squids wear no protection, deeming themselves invincible. This fact compounds itself with the fact that they engage in 'extreme riding'--performing wheelies and stoppies in public areas. Squids wreck a lot. Derived from 'squirly kid.'"

We're confident in applying the label to Bieber for these eight reasons:

1. No upper body protection. The human body evolved to go about 12 mph. As a result, hitting hard stuff at speeds above that tend to result in severe injury. Specific items of clothing have been developed with padding or "body armor" capable of preventing such injuries. Riding without such protection is largely considered suicidal. Since Bieber dates models and other famous-types, we'll assume he's just ignorant of the risk. And seriously dude, you'd look twice as cool if you'd just wear a leather jacket.

2. Fly Kicks. Did you know that motorcycles are seriously heavy? That Ducati 848 Evo he's riding weighs 370lbs before you add fuel. Sitting on it at a standstill, you have to support all that weight through your legs, feet and ankles. Even if The Bieb doesn't fall off, over-the-ankle boots provide much needed support. If he does fall off, those bedazzled sneakers will fly off his feet in less than a second, providing no protection against injury. But why not wear real motorcycle boots? They look awesome.

3. No Gloves! Here's a fun formula: In a crash, for every 1 mph you're going over 30 mph, you lose an additional 1mm of flesh while sliding on the average road surface. That's if, like Bieber, you don't wear protection. Doing the math, that's 1cm of flesh if you slide down the road at 40 mph. Where on Justin Bieber's hands does he have 1cm of flesh to lose? This is what happened to my butt at 35 mph.

4. Custom Stickers. These read "Swag." Justin's taken the time to personalize his bike, but hasn't invested similar time in his riding skills. Come on dude.

5. Expensive helmet, no other riding gear. A common sign of squidly behavior. Those pesky cops make you wear a helmet, so you may as well buy the most expensive one, right? All it means is that you'll be fully aware of the pain while you lay in the ER suffering multiple compound fractures and road rash.

6. Riding on the shoulder of a highway. Really dude? See all that stuff to your left? That's the road, it's where you ride. If traffic is heavy, you ride in the empty space between lanes, not off to the side. Doing so is illegal, increases the likelihood that debris will cause a flat tire and cars aren't looking for bikes approaching on the shoulder, so should one pull over, the likelihood of it hitting you is increased. Just an all-round bad idea. Here's how you lane-split safely.

7. Heels on pegs. Again, another classic indicator of a deficit in riding ability. Because riding a high-performance motorcycle like this Ducati is essentially an athletic sport, those who master it do so with a specific form or "body position." That form sees the balls of your feet placed on the pegs, enabling you to move your body around the bike. Locking your heels in like this is detrimental to control.

8. The biggest chicken strips ever. See that large, shiny patch of unused rubber on the side of the tire? That's there because Justin hasn't leaned the bike much past 20 degrees to take a corner. Because motorcycles turn by leaning over, the amount of tire that's worn is sort of an indicator of how that motorcycle is ridden. Typically, a motorcycle owned by an experienced rider will display no, or very small, strips of unused rubber on the sides.

All of these eight signs together, combined with the fact that someone with no prior motorcycle experience purchased an exotic, exceptionally difficult-to-ride superbike as their first motorcycle can only invariably lead to one conclusion: Justin Bieber is going to crash and, if he doesn't start wearing some safety gear, he's going to get really, really badly hurt when he does. I hope his management is listening.