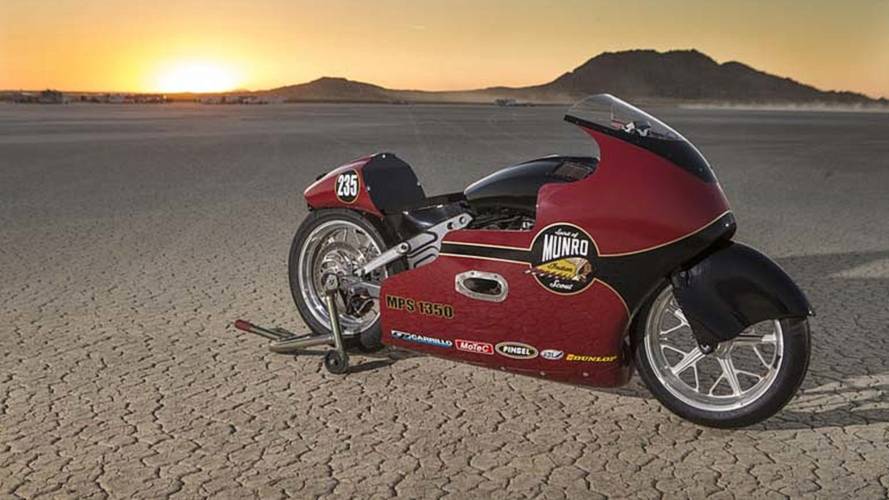 Lee Munro went out on the salt flats with an Indian streamliner to chase his Uncle's legacy, and Justin was there to tell the tale.

When I imagine standing on the surface of another planet – somewhere in a distant galaxy, pulled straight from Science Fiction – a sense of absolute isolation is the first thing that comes to mind. A vast expanse of nothing, in every direction. A desolate landscape stretching out in front of me, forever. The horizon filled with only a hope of seeing the end of this thing. And so, when I stepped out of the truck and onto the Bonneville Salt Flats for the first time, with the white salt and its snow-like texture beneath my feet, I couldn’t help but feel like I was off of Earth, exploring some strange rock floating in space.

I wasn't on an alien planet, though. I was in Utah, just beyond the border with Nevada, on hallowed ground. Where men and women have braved everything to exceed our natural abilities to accelerate. 470 MPH! Turbine powered tubes with wheels, the pilot pushing a pedal and praying for a flat, smooth surface. Total insanity if we’re being honest. And those that achieve their goal are simply motivated to surpass yet another, or perhaps carve their name into a new category. It’s a strange experience, really, watching people work so hard for something so selfish.

A number, etched into a trophy or printed onto a small slip of paper, and yet carrying so much weight. So much importance. Not for motorsport, but for mankind. To prove that the limitations of friction and traction and resistance are but small hurdles in our endeavors to prove, in some weird way, that we are greater than what was given to us by nature or God or whatever you choose to believe. Because speed doesn’t believe in anything other than physics, and to conquer it, one must accept the risks, swallow the pill and pull the trigger.

In 1967, at 68 years-old, Burt Munro set out to do something astonishing – to take his ancient 1920 Indian Scout and set a land speed record. His fastest official time was 190.07 mph, however his unofficial speed record (officially timed) was 205.67 mph for a flying mile. Fast. Real fast if you consider the top speed of his aging Indian Scout was a meager 55 mph when it rolled off the factory floor!

Burt is a legend at Bonneville. His name is synonymous with an unadulterated pursuit of speed. He came from afar, conquered much and was never satisfied, a lot like everyone standing on the salt the day I arrived. People from every place with engines, aerodynamic adjustments, and accouterments that would make your head spin. I was there to witness something astonishing myself – to watch Burt’s great-nephew Lee Munro take a run down the salt on a lightly modified 2017 Indian Scout emblazoned with the same gold headdress that adorned his uncle’s Indian.

The bike was streamlined and low, stretched out with handlebars that looked more like levers you’d see in an old semi-truck. His riding position was pulled straight from some kind of masochistic yoga manual. The motor was only slightly modified, with new heads, an air intake, and an exhaust that dumped straight out the side of the streamlined bodywork. New wheels accompanied a fuel tank absent of fuel - petrol was put beneath the seat to lower the center of gravity, I believe – as well as a narrowed triple-tree in order to accommodate the fiberglass shell that would shield Lee and help him achieve his 200-mph goal. Aside from that, this was, for all intents and purposes, a fairly stock 2017 Indian Scout running in the Modified Partial Streamlining 1350 (MPS 1350) class.

Lee’s first run was down the short course at 191.28 miles per hour. I watched from the starting line, with Lee disappearing into the distance gently, the roar of his overhead cam v-twin echoing across the salt. Apparently, the salt is best in the morning, before everyone has dug their tires into it and the sun has had a chance to cook the lines into the earth. So, Lee ran but once on the first day. That night, Lee and I had the chance to get acquainted. I learned that he had moved from his family home in Invercargill, NZ to Christchurch, NZ to pursue greater business opportunities – he installs swimming pools, in case you’re curious. He’s a road racer, taking to the track on a Ducati 999S most recently, and clearly not afraid of going fast. Most importantly, and what really stood out to me, is he’s just like you and me. An average Joe, if you will. Hard working, with a wife and small child at home, just looking for a fix like so many of us. To go fast and, in this case, to honor his great uncle. He's a man that sort of defines the stubborn, DIY attitude that is Land Speed Racing.

At the end of the week, Lee only managed two timed runs. The aforementioned run down the short course, and a second run the next day down the long, rather bumpy long course where he posted a time of 186.415 mph. This wasn’t about setting records, though. This was about showing people that Indian is serious about the future while also keeping their feet firmly planted in the past. That records are meant to be broken, but so are boundaries, rules, and reputations. I walked away with a new-found sense of respect for the engineers, the blood and the sweat and the tears people put into those little pieces of paper: their time slips. Because it’s not just a number, it’s a record. And if you’re out to break one, you better be prepared to pay the price.