Is Motorcycle Yoga a Thing? 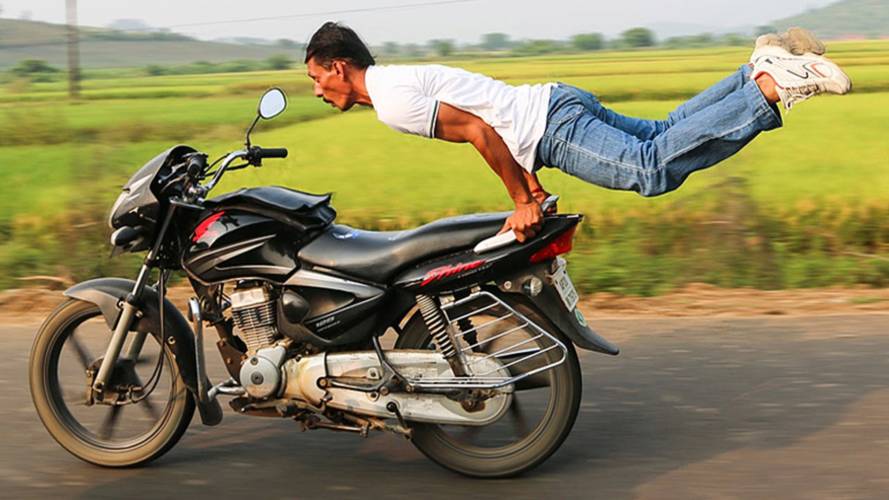 Some people are proclaiming the benefits of combining yoga and motorcycling, which may make it a thing.

Photos of lithe young people on social media displaying gymnastic moves on parked motorcycles have led many to question whether or not motorcycle yoga is really a thing. Which of course it is, given the number of posts on social media, which make it, by definition, A Thing.

But what kind of thing? Is it merely fit young folks showcasing their athletic abilities for the hashtaggers and YouTubers? Or could be a serious form of moto-meditation, designed to bring riders into a serene state of cosmic equilibrium with their machines. Or something.

Jennifer Peris relaxing with her R6

Kathy Lee Kappmeier of San Diego, California, was the founder of Yogawell classes and producer of a calendar titled the “Biker Yoga Goddess Calendar". Kathy Lee, who died of cancer in 2009, heard in the pulsing throb of a V-twin engine a “healing mantra.” She rode an Indian Scout in the Iron Butt Rally. Although Kappmeier was afflicted with scoliosis from childhood, her athleticism rejected the suggestions of braces and surgery, and she turned to yoga.

While the use of motorcycles as props in marketing all manner of products is now commonplace, the connective tissue between yoga and motorcycling actually has a tangible basis in physiology and philosophy. The union recalls the line from Robert Pirsig's Zen and the Art of Motorcycle Maintenance: "The real machine you're working on is the machine called yourself."

Andres Correa getting his yoga on lakeside.

We also ran across a book on the subject, “Motorcycle Yoga: Ways to Make Motorcycle Touring More Comfortable and Safe,” by Lisa Haneberg.

READ MORE: Meditation by Motorcycle - Finding Nirvana in a Curve

“Motorcycle touring can be a pain in the neck - and shoulders, and knees, and hands, and butt!” she writes.” I want you to enjoy your ride by being more comfortable and safe. This is a book about the physical aspects of motorcycle touring where I share my Motorcycle Yoga routine and offer suggestions for how to prepare your body for a long motorcycle trip.”

So apparently motorcycle yoga is indeed a thing. And if it’s your thing, and you’d like to submit a photo of your favorite position, feel free to post it in the Comment section. Peace.