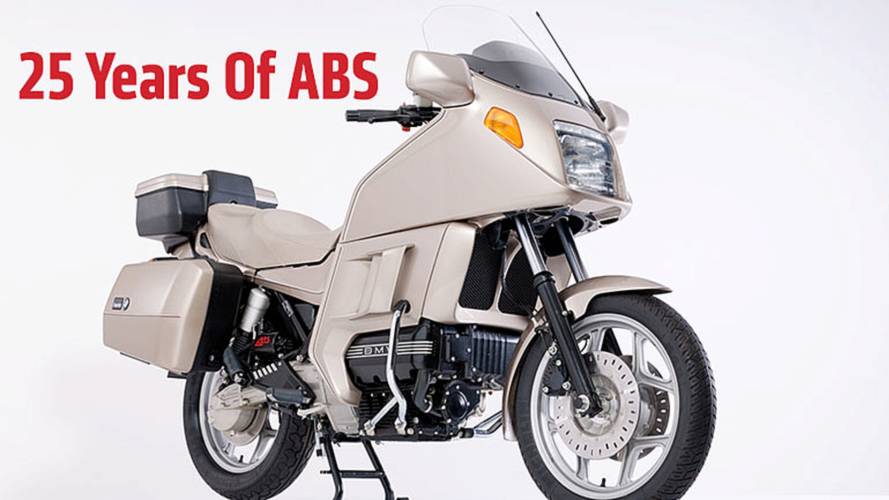 2013 marks the 25th anniversary of motorcycle ABS, here's a look back at the first bike fitted with an antilock brake system from BMW.

Each week RideApart looks back to highlight key milestones in motorcycling history from innovations to significant model introductions to racing successes and, of course, some of the disastrous things we'd rather forget. This week it’s the 25th anniversary of motorcycle ABS.

It’s hard to believe but 2013 is the 25th year since BMW Motorrad became the first-ever motorcycle manufacturer to offer an Antilock Brake System as an option on its then, highly popular K 100-series.

In the late 1980s, even in the automotive world, ABS was still in its infancy and was fairly rudimentary and nowhere near as sophisticated as it is today.

One of the first problems BMW encountered in developing ABS for bikes was adapting the technology taken from cars. The kick back or pulsating action of the ABS caused noise and a lot of vibration in a bike’s brake lever and pedal that initially made it very difficult to operate.

BMW engineers developed an electronic/hydraulic system that used a plunger to regulate the hydraulic pressure on the brakes and a ball valve to isolate the brake lever from the system. This, in turn, helped to reduce vibration through the brake lever. That first BMW motorcycle ABS was not light and the entire system added close to 30 lbs to the overall weight of the bike.

Five years later, in 1993, came BMW’s second generation ABS, which was even more remarkable. Not only did the engineers cut the overall weight of the system down to around 13 lbs, but also new developments in electronics improved ABS reliability and an upgraded control system better regulated the hydraulic plunger.

BMW’s second generation ABS, in turn, was even faster and smoother.

The rest is now history with all motorcycle manufacturers offering ABS on some models. Only BMW fits ABS as standard across its entire motorcycle range and has recently launched its sixth generation of its revolutionary system.

Current ABS systems weigh around 1.5 lbs and work almost imperceptibly to improve braking distances and safety not only when traction is limited, but even on smooth, dry surfaces. Some systems even work well off-road. As of 2016, ABS will be mandatory on all motorcycles over 125cc sold in Europe and will, consequently, be fitted to virtually all bikes sold here in he U.S. too.

Have you ever ridden a motorcycle with early ABS? If so what was it like?

The Fastest Bike In The World Has ABS Too: Ducati 1199 Panigale R