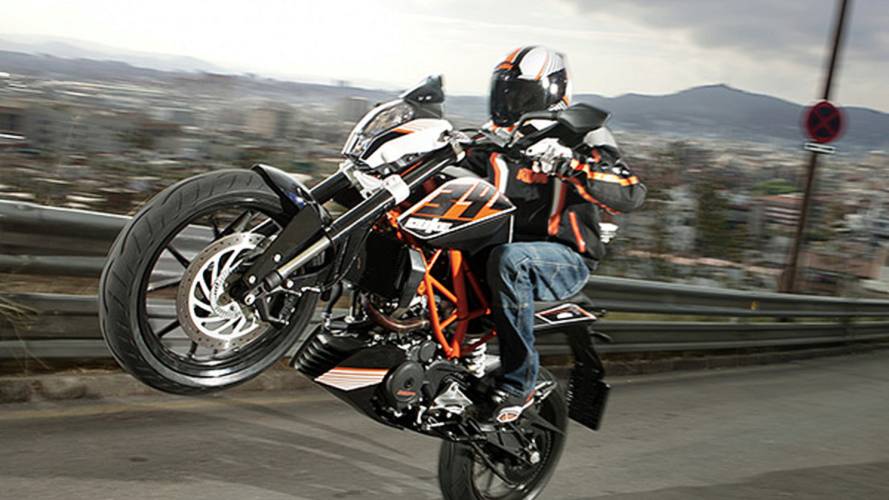 So you’re kinda new to motorcycling and you’re on a budget. That means a single bike that’s got to do everything: take you to work, take you on trips and make your weekends rad. Figuring you’ve got $6,500 to spend, would you buy the new KTM 390 Duke, a Kawasaki Ninja 650 or a used 600cc sportsbike?

Don’t know if you noticed, but HFL’s got a new comment system. Post subscription, we’re opening up our intelligent, insightful community to everyone. It’s easy to login using your Facebook, Twitter or Google+ IDS or just create your own to use on this site or any of the thousands of others that also use Disqus.

And your opinion counts. By participating in HFL comments, you’ll be conversing directly with noted motorcycle designers like Michael Czysz, HFL contributors like JT Nesbitt, industry representatives like Victory’s Robert Pandya and participating in a conversation that’s closely watched by virtually everyone in motorcycling. We know because your comments are a regular topic of discussion amongst OEM executives and industry heavyweights. Believe it or not, but it’s actually fairly normal for me to be denied access to a bike based on what you’ve written about it in comments!

Why $6,500? Well, that’s around what the new KTM is going for over in Europeland, once you convert their troubled currency to the kind with all those Mason symbols. It’s what the Ninja 650 sells for new once you figure in the typical Kawasaki discount. It’s also just enough to put you on a mint-condition, latest-gen 600cc sportsbike. Let’s take a look at each bike in detail.

The 390 Duke might be relatively cheap (compared to other KTMs) thanks to a partnership with Bajaj that sees the bike made in India, but component quality is seriously high. The 43mm, USD WP forks are fully-adjustable, as is the WP monoshock. It uses the same steel-trellis frame as its 125 and 200cc siblings to achieve a very short 53.8-inch wheelbase which, combined with steep angles and flat bars, should make it very nimble.

Light, fast and fun to ride, the KTM’s Achilles heel will likely be distance; a high reving single with upright bars and no fairing doesn’t sound like much fun on the highway.

The Ninja 650 uses a much more traditional formula to create a practical, do-it-all sporty type thing. Parallel-twin, steel-tube frame, non-adjustable forks and other basic components. It’s heavy, but it makes good power, is comfortable over long distances and is relatively easy to manage for novice riders. There’s a fairing, but those are big, tall, comfy flat handlebars. A little boring to ride, but totally capable of performing any task you ask of it.

This is where budget bikes typically run into problems. For the price of a new one, you can get something that’s had the full weight of technical R&D from a massive company like Honda put behind it. Not much different from the new, facelifted 2013 Honda CBR600RR, 2007 was the first year for this frame and motor and ugly abrupt fairing arrangement. That means this is still pretty much on the cutting edge of track performance.

There’s a clear performance advantage here over both the KTM and Kawasaki and don’t think for a minute that the little Duke is going to have much of a handling edge. The CBR’s wheelbase is just 1/10th of a inch longer and its chassis geometry even more sports focused. It’ll lap a race track as fast as anything out there, but it’s easy-to-ride, smooth and comfortable, so it’s equally at home splitting lanes or putting in all-day rides.

The downside is going to be higher running costs; tires, maintenance and insurance are going to cost significantly more than the KTM or Kawasaki. Then there’s the image problem: full-on sportsbikes, complete with graphics, aren’t exactly en vogue in places with populations and culture and bikes like these attract much more attention from both cops and thieves, two parties who never seem to manage to find themselves in the same place at the same time.

Which one would you buy?