Is A Trike a Motorcycle? 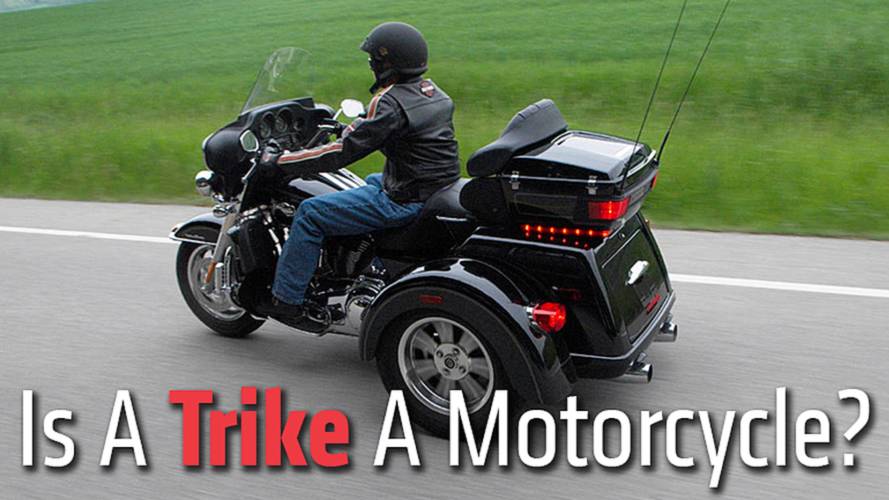 Trikes are coming back. This time, though, they’re the production kind, not so much the custom kind. We ask, is a trike a real motorcycle?

The word “trike” used to conjure images of the wackiest ‘70s customs, with luxuriant polychrome glitter paint and thousands of lights. Moustaches, tassels, and tragic belly-shirts. And airbrushing, lots and lots of airbrushing. They were a crazy mutant of the motorcycle family, with maybe a touch of dune buggy DNA, but still part of the family. They were usually built off of a motorcycle platform, with some fiberglass kit parts and a cast-off Beetle axle. They were bad in both senses of the word. Trikes disappeared for a while, but they’re coming back.  This time, though, they’re the production kind, not so much the custom kind.

A few years ago, Harley brought out the Tri-Glide, a touring trike that can’t help looking a little like a geriatric version of the Electra Glide. What could have more biker DNA that a Harley touring machine?  Still, it’s like H-D themselves were copping to the stereotype of being an old man’s machine. When you see someone on a Tri-Glide, you want to say, “Good for you!” with a friendly but unintentionally condescending tilt of the head.

CanAm’s Spyder trikes certainly have a sportier look. It’s a machine that may feel a little safer or easier to control than a two-wheeled bike, but it seems to be going after a younger target audience. (Whether it actually is safer or not, that perception may be unimportant to their target buyer.) Still, their advertising indicates they’re trying to go for biker credibility. In its 2012 ad, the couples on a CanAm outing stop at a stereotypical biker roadhouse. At around the 0:10 mark, there is a tough-looking “real” biker in the background, complete with patch-festooned vest, giving the CanAm an approving nod. At the 0:20 mark, they exchange biker waves with a group of oncoming cruisers. This little piece of fantasy is just the validation they’re looking for.

Soon, the Polaris Slingshot will join the trike genus, but this is a bit of a different animal. With its side-by-side bucket seats and steering wheel, this has less claim, and maybe less aspiration, to be grouped with the bikes. This is more of a radical sport buggy — a three-wheeled open car, rather than a bike.  Closer to a Talon or even a Morgan than a Harley.

Since for some reason it is always important to decide who is in or out, what is “authentic” or not, we cannot help but ask: is a trike a motorcycle?

I think we can say right off that steering wheels and side-by-side seating are disqualifiers.  It may be a great machine, but not even the manufacturer would call it a bike.

For the Spyder and the Tri-Glide, there is something quintessential that they lack: they do not lean.  Leaning is so fundamental to the experience of riding, to what separates riding from driving, that any machine that doesn’t lean cannot be considered a motorcycle. How you lean is one of the major factors that defines who you are as a biker. It is really how you express yourself and how you get your thrills.  Leaning is what makes riding physical and visceral. Leaning is everything.

The Piaggio MP3 leans, so we can be liberal enough to give that little guy a pass. As for the others, they may be fun, comfy, and quick, but, sorry, they aren’t motorcycles.

Do you agree? Is leaning what separates the boys from the men?