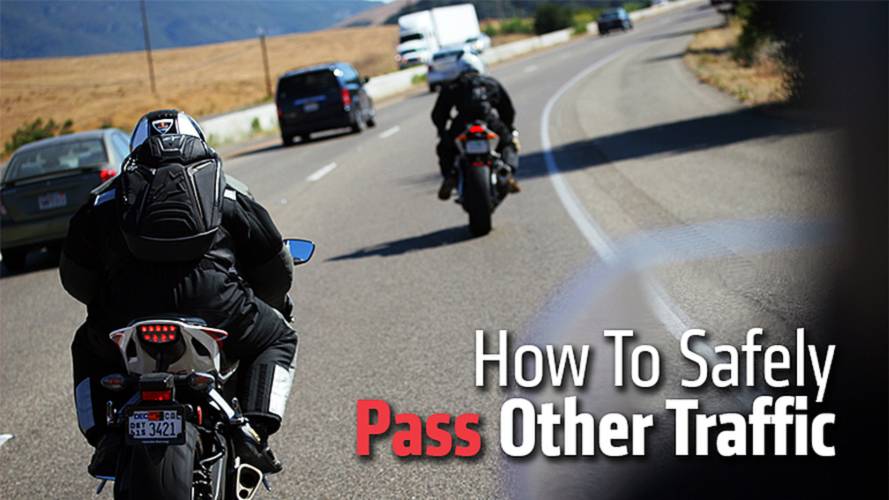 Passing. Totally legal, but also terribly controversial and dangerous. Here’s how to safely pass other traffic on your motorcycle.

Passing. Totally legal, but also terribly controversial, likely to upset the passee and, if you don’t do it right, terribly dangerous. But, it’s also one of the unique abilities of the motorcycle and a skill any rider needs to master. Here’s how to safely pass other traffic on your motorcycle.

Traffic travels at a variety of speeds. On a road where a decent bike can travel at 75 mph in total, relaxed safety, your average passenger car may start squealing its Cheap-O TM-brand tires at just 50 mph. A big truck may struggle to average 35 mph and a school bus full of screaming children may bumble along at 25 mph. There’s no reason — not safety or respect or The LawTM — that you shouldn’t be able to determine your own safe pace.

But, for some reason, American drivers seem to consider passing to be an affront to their constitutional right to inconvenience others to their heart’s content. It makes people angry in a way only lane splitting seems to beat.

That’s not true in other countries, where passing is simply considered a reasonable exercise in personal progress. In fact, the United Kingdom’s police operated their own high performance riding school in which cops teach citizens how to safely control high performance motorcycles on the road. The thinking is that, if they’re going to ride them, they may as well do so as safely as possible. Less police work that way. I’ve taken that school and this advice is drawn from that experience. Believe it or not, but the laws of physics hold true no matter which side of the Atlantic you’re on.

The person who determined where they go is just a government employee or contractor earning a wage and, if equipped with some sort of manual, it’s likely as outdated as those textbooks you had in high school that listed 48 states. He/she had no way of knowing you or your bike’s capabilities, the individual traffic or weather conditions you face and likely had no way of controlling where the subcontractor/work program prisoner who actually sprayed the lines on the road.

You shouldn’t rely on double or dashed yellow lines to tell you where it’s safe to pass. Particularly on a bike, with our vastly superior performance and vision, we may be able to pass in safety on double yellows. Conversely, places with dashed lines — indicating legal passing zones — shouldn’t be trusted either. Would you trust the sub-contractor/prisoner working for a low-level government employee with your safety? I know I wouldn’t. I trust myself with my own safety and I make my own decisions on when and where it’s safe to pass.

Where it’s Safe to Pass and When

As an accomplished motorcyclist, you have a complete and total appreciation of the performance capabilities of your bike in any and all conditions, right? If not, stop reading now and go figure that out first.

Think about the total length of what you’re trying to pass. One car? Three? A bus, a truck and a minivan? How much time and distance will it take to safely pass them? You need to be able to see a clear road ahead for at least that distance.

Now, assume the worst case scenario. If you ride anything like me, that’s if there’s an equivalent speed demon on an equivalently fast machine travelling in the opposite direction. Factor in their closing speed and add it to your safe passing distance.

If you can easily accelerate past the obstacle in question, in the distance you can see ahead, factoring in your doppelganger and the distance he’ll close, then it’s safe to pass.

When Not To Pass

Intersections, driveways, turning lanes, blind crests, blind corners and absolutely anything that may restrict vision or cause another vehicle to pull into your path or turn across it should stop you from attempting a pass. Wait until none of those things are present before passing. Consider this rule absolute and without exception.

Continue Reading: How To Safely Pass Other Traffic >>

Ride Further Back For Better Vision

Following a big SUV, a truck or any other such vehicle that obscures your vision of the road? Back off until you can see well. It’s more distance, not less, that will make your pass more informed and therefore safer.

Other motorcyclists or drivers who aren’t busy staring at their phones may also want to pass the traffic that’s slowing you down. Before beginning the pass process, take a long look at what’s behind you, if there’s anyone there, inform them of your intentions. Turn on your left turn signal and move to the left of your lane.

Once you pull out to make the pass, you’ll want to make sure drivers in the queue in front of you don’t pull out ahead of you. Know how your bike has a “trigger” for its high beams? That’s so you can easily flash it while passing. Do so. Ride to the far left of the road so people can easily see you in their wing mirrors, too.

So you’ve got a clear stretch of road, made sure no one behind you is trying to pass you and you’re ready to go. Don’t just grab a handful of throttle and pull a 150 mph power wheelie pass that truck. Accelerate with conviction and pass with extreme prejudice, but do so in a controlled, safe manner which won’t a)cause the passee to pick up the phone and call the cops b) allows you a margin for safety should the vehicle or vehicles do something unexpected and c) keeps you marginally on the grey side of the law. Don’t linger next to vehicles being passed, but also don’t push so hard that you sacrifice control of the situation.

Have a number of vehicles to get past and limited space in which to do so? You may need to pick them off one at a time. To all the above, add finding a reasonable amount of space to pull back into the queue. Identify that space before you pull out and match the speed of its leader and follower before pulling into it. Ideally, you won’t cause the car behind you to hit the brakes or take any sort of evasive maneuver and you’ll leave adequate following distance behind the vehicle in front. Relying on other traffic to do the smart thing is a recipe for disaster.

Sometimes, you may encounter a situation where you need to pull back into the queue unexpectedly. Again, this is where passing at a reasonable speed helps. And again, it’s all about planning. Have your escape routes planned before you pull out, then simply choose plan B or C or D should a situation arise where it’s no longer safe for you to make the planned pass. And also again, match the speed of the gap before pulling into it. And, for the love of Flying Spaghetti Monsters, clearly signal your intentions, particularly if another bike or car is passing behind you.

You’ll know you’ve gotten this all right if your pass is smooth, goes as planned and doesn’t freak anyone out. It should not involve any last second near misses, any extreme control inputs and no aspect of the pass should catch you unawares. Like all the rest of your riding, smooth is fast.

Put in some miles, practice this along with all of the rest of your skills and you’ll be smoothly and effortlessly folding passing into your ride. Traffic will become less of an impediment and more just another aspect of your riding. You should be identifying traffic and passing opportunities so far in advance that you’re not interrupting your pace or flow with the passes, you’re just flowing down the road with confident ease.

Cops hate passing as much, if not more, than other Americans. It’s also a great opportunity for expanding their bottom lines, as it enables them to throw words like “reckless” and “endangering” onto that ticket they’re going to write you. And, while the law states that it’s kosher to pass so long as the yellow line is dashed and you don’t exceed the speed limit, passing also allows them to enter their “judgment” into the ticket-writing process. If their “judgment” determines that you did anything unsafe, reckless or just plain un-American, expect to get the book thrown at you. We’d never, ever, pass a cop car, no matter how slow that Crown Vic is going. Above all, cops need to feel that their authority is respected.

So tell us, what advice for safely passing cars do you have.