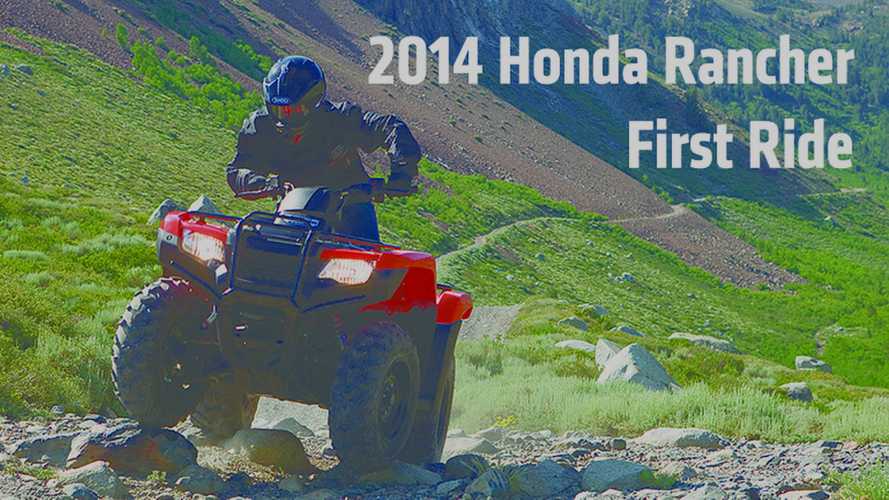 The 2014 Honda Rancher promises to add fun without sacrificing utlity. Can this ATV succeed?

The Rancher has long been the standard mid-size workhorse ATV for Honda – a successful product with a clear customer base in the utility ATV world. The 2014 Honda Rancher is trying to expand into the recreational market, making it a “more well-rounded machine, more versatile for recreation and utility.”

A lot. Honda started from scratch with an entirely new frame design. Honda talked to Rancher users and decided that to expand their market, they needed to increase rideability. According to Large Product Leader Eric Stevens, the new frame is “20 percent stiffer globally, for more precise handling, but we also made the frame compliant in certain areas to improve the suspension feeling and steer effort, and we did all this without adding any weight to the frame.” The new frame was designed together with a new swingarm and longer-travel suspension for a ride the engineers repeatedly described as “more plush” – an adjective I associate more with Buicks than ATVs. Adding to the “plush”-ness is a new thicker, wider, and softer seat.

While the bones of the machine will have the greatest impact on riding experience, what most of us will notice first is the new styling. This year’s Rancher has a more squared-off, rugged, Ford F-150-ish look than the previous models. While I actually find this to be quite a handsome design, I don’t know if it supports their marketing goal of reaching more into the recreational market, where more lithe, wasp-like designs dominate.

The powertrain is basically the same 420cc, longitudinally mounted, fuel-injected single as before. While power output is the same, fuel economy is up a claimed 10 percent this year. Combined with a larger, 3.9-gallon tank, this will mean real increased range. The automatic Dual-Clutch Transmission (DCT) is not a new option, but it too has gone under the engineer’s knife. “We’ve re-tuned the dual zone shift map for performance and to match the driver’s style,” Stevens indicated. By throttle position and vehicle speed, the DCT tries to intelligently hit the right gear at the right time, based on the rider’s demand, and to reduce “shift-shock.” Also revised is the optional Electronic Power Steering (EPS) with the intent of keeping steering light but tactile while reducing kickback in the handlebars. Automatic transmissions and power steering are areas where the best engineering intentions can lead to unfortunate outcomes, so they were of particular interest in the ride.

Rider position is revised this year. “The rider triangle has been optimized to fit all our different customer sizes,” they said, which seems like a laudable, but impossible, goal.

There is a litany of other design changes, which may be of more or less importance to different consumers. Emissions are down. The engine/fuel tank cowling is easily removable without tools. Headlights are increased from 30W to 35W output. There is more information on the electronic display, including water temp and a maintenance monitor.

There are some improvements that may increase durability: The fuel pump is relocated in the fuel tank, like a car, for intrinsic cooling and less exposure to dust and debris. The swingarm bearing is replaced with a bushing, which Honda claims will last longer. The machine still has dual front disc brakes and a single rear drum on its solid rear axle, but that drum is moved outboard toward the wheel to increase clearance and reduce possible obstacle damage. That rear axle is also now enclosed, rather than exposed.

Finally, there is a host of new factory accessories, including a snow plow and heated grips, which again seem to favor the utility market.

You may have noticed the word “optional” a few times there. The Rancher comes in seven different sub-models, ranging from the no-frills 2WD, no-DCT, no-EPS, mechanical-only shift (no electronic shift) model up to all those options together, with every possible combination in between. This fine-tuning is an interesting strategy, which may help the careful buyer find the cost and options they really need.

We spent an afternoon with the new Rancher at Honda’s Transportation Research Center (TRC) outside the Marysville, Ohio, R&D facility where the model was developed. The TRC has a wide variety of on- and off-road test tracks, and our course included woodland trails, ravines, river crossings, errant rocks, fields, and a gravel road. It was a good all-around introduction for what is proposed to be a good all-around ATV.

420cc is not a big ATV, but right away the machine felt substantial and full-sized. This may be in part due to the broad, comfy seat. I could see why they had talked so much about the seat. I checked out that rider’s triangle, and, while seated, it seemed just right for my 6-ft frame. I later found that, while standing, the handlebars were an inch or two too low. A standing hard right turn while keeping the thumb on the throttle is a little awkward.

I was most skeptical about the DCT and EPS systems. These sometimes get in the way more than they help. Getting out on the trail, though, that was not the case here. The DCT was almost always right where I wanted it to be, giving good power and not up-shifting too soon. There was even very good engine braking with the DCT on, which I wasn’t expecting. Soon I was forgetting about it and just riding. Of course, you have more precise control (and sharper engine braking) in manual mode, but the DCT just did well without asking. It was almost – dare I say – Honda-like.

In manual, the gearing seemed quite low. This reflects its utility heritage and seems more suited to stump-pulling than trail-riding. It makes for more shifting in the woods, but the machine is really quite forgiving. If you go into a turn in the wrong gear, it doesn’t care (much), and it will happily pull out of a tight turn in third or tractor out of a ravine in seconds.

The EPS, which I also initially doubted, performed superbly. It didn’t really feel like power steering, just like a very light and responsive steering. The downside is that the model without the EPS was rather heavy in low-speed steering, especially in a tough spot when you need it most.

The 2WD was not ideal in the woods, as you can imagine, but fortunately the 4WD shift-on-the-fly lever was quick and handy when you need it in a hurry – if you’re on a model that has that option.

The weight of the machine seems quite compressed around its center of gravity, and it feels like the CG is right between your feet, which makes it nice for standing on rougher trails, letting the Rancher buck under you like a game horse. The gas tank is high and above the front wheels, but this did not seem to add any undue inertia.

The Rancher did everything we asked of it gracefully and easily. It is certainly capable of doing much more than daily tasks, especially the upper-tier models.

The Rancher feels full-size and capable, but still light and agile. I was never left feeling that I wanted more out of the machine, nor that it was too heavy or awkward in tight spots. A good Goldilocks design.

I wouldn't describe the ride as “plush,” but it is quite comfortable, without losing feel or control. The seat is a marvel.

Large, frame-mounted front and rear cargo racks would be equally useful for hunting or camping as for work.

The non-EPS steering is boggy and heavy. Maybe it just feels that way because we were spoiled by the EPS machines we rode, but for heavy use the EPS seems like a must.

2WD is really only suitable for light duty. To me, this precludes the base model from consideration for many ATV applications, especially for those in the recreational market.

Handlebars could be higher.

The Rancher ranges from $5199 for the base model to $7399 for the top-of-the-line. The differences in these models are not frills and trim, but actual product benefits. The base model is 2WD only, with no power steering or DCT. The DCT is a nicety, but 4WD and EPS are musts for a lot of demanding recreational use. The base model is really suited for flatter, more improved areas. It is nice to have that economy option, but I think most of the market will want the more versatile upper-end models.

Could this be the Universal Japanese ATV? (Even though it’s designed and built in the U.S.) The Swiss Army ATV? Yes. The Rancher has a broad range of capability, and if Honda maintains or even improves their durability track record, this is a machine that users should be very happy with. They said, “we needed to increase rideability,” and they met that goal. The Rancher is an excellent product that will be as fun as it is functional.

The real question is whether they will be able to keep the utility market while opening up the recreational market. No doubt users will find that their Rancher is capable of much more than patrolling the fence line, but Honda needs to communicate that capability better.

I initially thought of the Rancher as the Civic of ATVs – dependable, but not too thrilling. Now I think it’s the CB750 – a great all-around platform.

World Record ATV Jump: Behind The Scenes Of The Most Epic UTV Video Ever made