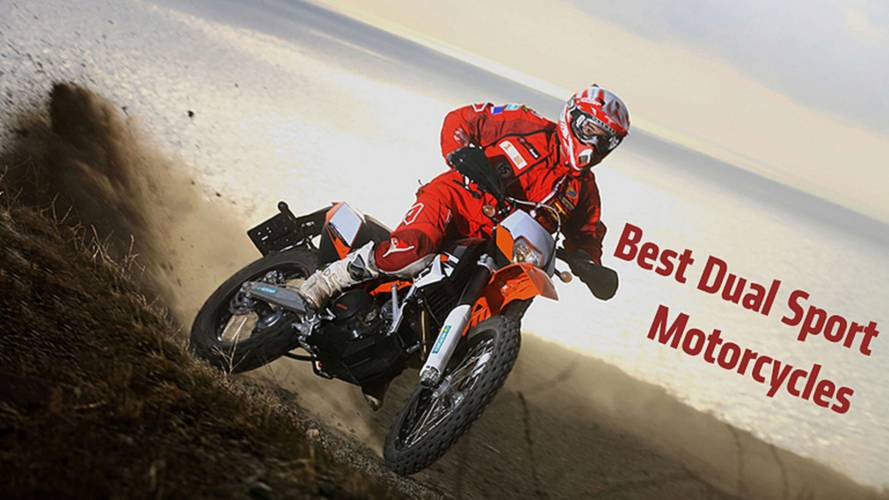 Let's go play in the dirt!

Want to ride off-road? A street legal dirt bike is the best way to do it. As a bonus, they tend to rock city traffic too. Here’s a guide to the best Dual Sport motorcycles.

The CRF250L is the cheapest bike on this list, and just an absolute steal. It’s completely capable both cruising on the freeway and playing on the trails. At 74 mpg, it’s also quite economical as well. It’s the perfect bike way to get started in this category.

The KLX is very similar to the CRF250L, just slightly taller and slightly more competent off-road due to its slightly longer front suspension and better brake feel. Unfortunately, the Kawi hasn’t received an update in far too long; leaving it the only 250cc dual sport that’s carbureted. The KLX250S is a very basic machine, offering unadulterated off-road ability.

The DR650 reminds of a bike made for 3rd world markets instead of a larger displacement dual sport. Compared to its more capable DR-Z400S stablemate, it’s two inches shorter, both in height and length, and has a drum brake in the rear. It’s isn’t as prone to speed wobbles on the highway, but is inferior to its “little” brother in pretty much every other capacity.

The KLR650 is one of the most popular dual sport bikes in the world. It’s found strength in its simplicity and has people continuing to purchase it, a bike that has been unchanged in a decade, because of the robust availability of parts world-wide. Our entire planet is filled with parts and people with the knowledge to use them that, when paired with the KLR’s 6.1 gallon fuel tank, make the KLR a great option for even your longest trek. Thanks to its big fairing, the KLR sorta straddles the ADV and Dual Sport classes. It’s heavier than a proper dirt bike, but also more capable of putting in road miles.

The Suzuki is good at pretty much everything it does, whether your riding is 100 percent off-road or 100 percent city riding. The small tank can be limiting, especially since fuel consumption increases dramatically at freeway speeds and Suzuki continues to offer it with only a reserve switch; no fuel gauge or light. The DR-Z400S is one of our favorite base platforms, but expect to do some modifying should you want to do any real trail riding.

The most expensive Japanese 250 on this list is also the most capable. With that extra price come fuel injection, wavy disc brakes, and fully adjustable suspension. The WR250R is both the most comfortable at freeway speeds as well as superior off-road, making it the best performer of the small displacement Japanese options. You get what you pay for.

The XR650L is our favorite of the 650cc Japanese dual sports. While the KLR’s strength is in it’s ability to get the job done and have parts available worldwide should it break down, the Honda is just a better bike off-road. With at least 11 inches of travel at both ends, the Showa suspension setup (adjustable for rebound and compression damping at the rear and compression damping up front) is surprisingly nice for such an elderly, basic bike.

The only all-electric dual sport on our list makes 44 hp, weighs 275 pounds, and makes 70 lb.-ft. of torque!. All of that power, delivered instantly makes this an incredible option off-road or on. The FX utilizes Zero’s modular power pack system, essentially allowing you to swap batteries like you would a flashlight. Ever ridden through the woods in near-complete silence?

The 350 EXC-F is basically a race bike with lights and a license plate. Its 15-hour service intervals and poor on-road handling will make you think twice before taking it to romp around the city or down the highway. Off-road is an entirely different story, where the seemingly whacky suspension settings and brakes come to life. The 350EXC-F was built with a purpose: to destroy every obstacle in its dusty path, which it handles with ease.

A single-cylinder dual sport for over $10k! Before you skip past, think about how the addition of fully adjustable suspension, a slipper clutch, and variable fuel maps would aid your off-road riding. Basically, imagine any other bike with all your dream modifications already fitted, as stock. The most capable off-road dual sport isn’t bad on the road either.