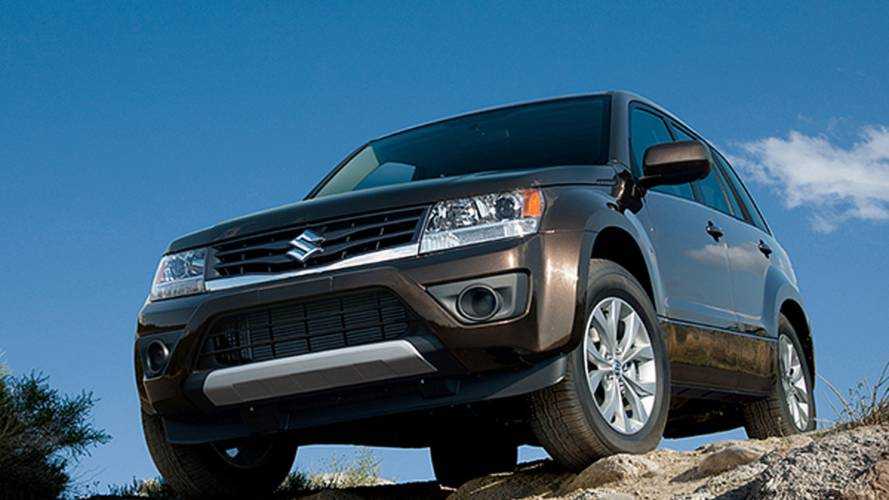 Requiem for an SUV: 2013 Suzuki Grand Vitara While we’re new to covering trucks and SUVs and haulers here at DriveApart, we’ve been covering them in...

While we’re new to covering trucks and SUVs and haulers here at DriveApart, we’ve been covering them in other capacities for quite a long time. So, when we decided to cover them – you know tow and haul – we jumped at the chance to drive the newly updated 2013 Suzuki Grand Vitara knowing that if Suzuki made cars half as good as their bikes, we’d be in for a treat.

We just happened to be the last journalists to drive the Grand Vitara as Suzuki’s automotive division went bankrupt about halfway through our loan. Below is a truncated version of our review, while the company may be gone for now, you can still score a sweet deal on the remaining stock.

Suzuki believes that the compact SUV is now a destination for consumers, and no longer simply a stopover on the way to the land of the super-ute. With the $4 per gallon gas shocks of mid-2011s and sales of large SUVs down, you’d be hard-pressed to argue with them. But unlike the traditionally rugged, large SUVs, most small utes and crossovers are built on car chassis and thus, have tendency to falter on rougher surfaces. But that’s not the case with the 2013 Grand Vitara – it’s a proper SUV in every sense, albeit in a smaller package. With its rear-wheel drive setup and optional high/low four-wheel drive system, it laughs at gravel trails and taunts you to push its limits over rocky terrain.

Inside, the Grand Vitara has been improved in nearly every way too; gone are the wonky interior plastics and unflattering design, in are electroluminescent gauges and an ergonomically agreeable cabin. Couple this with a four-cylinder for improved efficiency, and the Grand Vitara is finally poised to give the competition a run for its money.

The four-cylinder strikes a good balance between fuel economy and power, making a V-6 seem almost unnecessary. The Grand Vitara has a solid chassis with a rear-wheel drive setup for more rugged performance. Suzuki’s seven-year/100,000-mile warranty grants owners peace of mind when it comes to their automotive purchase, even if the company is no longer around.

The automatic transmission available with the four-cylinder only has four speeds, and another gear would be a welcome addition. Design elements leave something to be desired when compared to some of the more stylish competition.

While it’s not meant to haul all of your matching Suzuki bikes, the Grand Vitara has a 3000lbs towing capacity. At that weight you can haul a small trailer and two RM-Z450s.

Though it’s rear-drive layout sets it apart from much of the front-wheel drive, road-biased competition, the Grand Vitara drives like most of the other vehicles in its segment. It’s just as happy cruising on the highway as a CR-V or RAV4 thanks to its four-wheel independent suspension, but when you come across a dirt trail you can flip it into four-wheel H and continue on your way without issue. The steering weights up well as more lock is applied, and shifting is predictable and smooth.

Unless you’re looking to do some serious torque-laden off road driving or towing, it’s hard to argue against the four-cylinder engine, which provides up to 26 mpg and doesn’t feel weedy until you rev it to the very top of its range.

For 2013, the Grand Vitara has one engine option, a 2.4-liter four-cylinder that produces 166 horsepower and 162 lb-ft of torque which puts power down via a seriously robust four-mode all-wheel drive system.

Own an RV but want to bring a car along? Suzuki has equipped the four-mode all wheel drive Grand Vitara with a transfer case neutral switch so that it can be easily towed. If you’re looking for a more comfortable environment, the top of the line Luxury model adds leather seats, heated front seats and an eight-speaker audio system to the mix.

Obviously a four-cylinder engine has the most economic appeal, and Suzuki is well aware, which manages to return 19 mpg in the city and 26 mpg on the highway.

The interior upgrades to the Grand Vitara are immediately apparent, and everything from the plastics to the electroluminescent gauges has a higher quality look and feel to it. Folding 60/40 rear seats provide optional cargo room of up to 68.9 cubic feet. All of the controls are intuitively designed, and while the giant, round ESP and Hill Descent buttons stand out as an odd choice, but you’ll certainly never forget where they're placed. The Grand Vitara doesn’t exactly shout “look at me,” but then again, few vehicles in this segment do. Suziki just redid the front fasica and it’s very much an evolution of the outgoing Grand Vitara, with an angular front-end and flat-sided body that conspire to disguise the four-wheel drive model’s nearly eight-inch ground clearance. Wheels of up to 18-inches are available with various trim packages.

With the recent downturn in large truck and SUV sales, the compact SUV market has become somewhat of a minor warzone. Pricing for the Grand Vitara has not yet been finalized, but expect to see it start right around the current model’s $19,499 price point.

This puts the Grand Vitara in competition with the Subaru Forester, Ford Escape, Toyota RAV4 and Honda CR-V

A lot of compact SUVs come across as overly soft – good for running errands around town but flawed when the road turns from asphalt to dirt, gravel or rock. But one drive in the rough stuff will prove that the Grand Vitara is different. It tackles any obstacles in its way with relative ease, only feeling limited by its ground clearance. Best of all, thanks to an improved interior it’s just as good at the around town stuff as the competition.