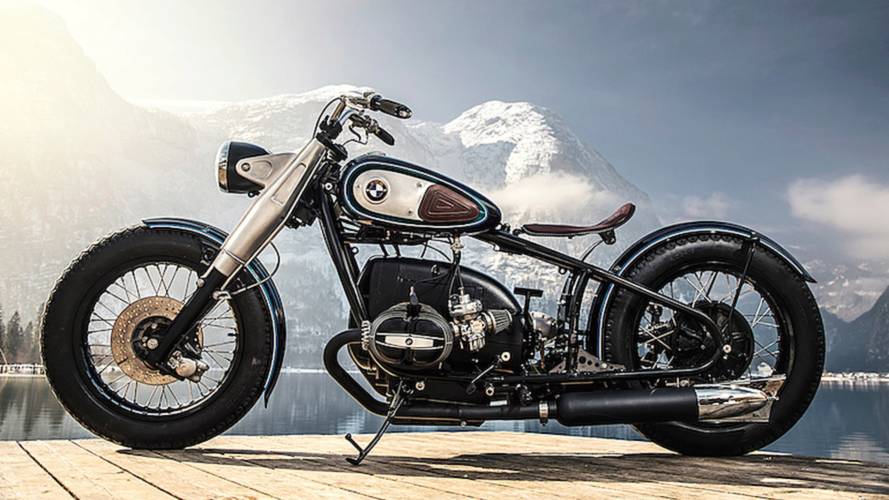 German-based Titan Motorcycles delivers a less than traditional BMW build, forgoing the bells and whistles in lieu of old-school simplicity and minimalism.

Photographs of some motorcycles can pretty much tell the whole story. Titan Motorcycle’s Bavarian Bobber is not one of those motorcycles. Despite it being built around a 70-year-old machine and maintaining the appearance of one that’s even older, the bobbed R50/3 conceals a suite of trick modern amenities without falling out of line with the build’s old-school cohesive visual theme. The high-quality of the construction, materials, and craftsmanship are all immediately noticeable, however some of the bike’s unseen elements are equally impressive if not more so.

The eight-part bolted frame was born out of a tireless effort in which the folks at Titan spent weeks studying wheelbases, axle loads, and steering head angles before landing on a 1956 R50 as the build’s backbone. The rear suspenders were tossed-out in favor of a hardtail conversion, and the opposite end of the bobbed Beemer was fitted with a 9° Rake Kit courtesy of AME Choppers. Handmade fork claddings – courtesy of Blechmann – furthers the custom’s vintage flavor. The power plant and transmission were borrowed from an R75/7, and the frame had to be tinkered with in order to house the new cardan driveshaft. The R75/7 engine was bored out with a Siebenrock Big Bore Kit to 1070cc, (from 745cc) resulting in a cool 70hp which isn’t bad for an engine from that era.

Like the majority of customs, the tank and seat make up a substantial portion of the bike’s character. It seems that the artisans at Titan's shop are well aware of this as they genuinely went above and beyond when crafting the saddle and fuel-cell on the Bavarian Bobber. A 4.5-gallon channeled droptank featuring alloy panels and leather pads was hand-crafted in-house by the Titan team. A blue-candy clear-coat adorns the rim of the tank, along with “classic BMW” white and blue pin striping which is also found on the bobber's large fenders. Titan out-sourced the saddle’s creation to Greece-based Autostop - a renowned leather specialist that designs and produces leather interiors for Ford, Chrysler, and Toyota.

The alloy fork claddings are a result of more than 70-hours of labor that was accomplished by Blechmann. The forks were also decked out with new bushes and seals, as well as modern Wirth springs stuffed (or slotted rather) inside. The fork’s one-off solo-piece brackets house a Dayton headlamp, keeping in line with the pre-war vintage theme that is furthered by ceramic coated fishtail silencers. A one-off axle mounted license-plate holder adds a more modern contemporary splash.

Married to the German scoot’s Kustom Tec Brake Pump is a custom-made brake-line system for the rear drum brake that was created for this project, and an LSL Flyer handlebar conceals internal cable routing. Capping off the ends of the LSL bar is a pair of Rizoma Squardo handlebar-end LED signals, while an equally trick and subtle Motoscope Instrumentation unit sunk into the headlight provides vital info. An M-switch Microtaster and tailor made electrics with m-unit, CAN – Bus connection, and m-buttons make up the controls while keeping the front end remarkably clean.

New 18-inch spoked rims are mated to the bike’s original hubs (which have been restored), all wrapped in Avon MK II tires. To preemptively avoid building a beautiful high-end custom that won’t start in six-months, Titan opted to utilize a Silent Hektik ignition system as well as an all new electrical system.

Ultimately, this week’s Bike of the Week is another great example of combining old-school aesthetics and modern components. The folks at Titan have done one of the best jobs I’ve ever seen at hiding various parts in order to keep a custom as clean and minimalistic as possible. The minute touches like the paint on the tank, or the leather tooling and stitching undeniably separate this bike from the kinds of things most backyard builders churn out. This build admittedly does remind me a lot of BMW’s R5 homage build that the manuafcerer commissioned, but I personally like the Bavarian Bobber more. Unsurprisingly Titan has built a long list of equally impressive two-wheelers, all of which can be viewed on their website. Titan’s Evel Knievel Harley build is probably my favorite after the Bavarian Bobber.

Have you built a machine you think deserves to be RideApart’s next BotW? Drop us a line at info@rideapart.com