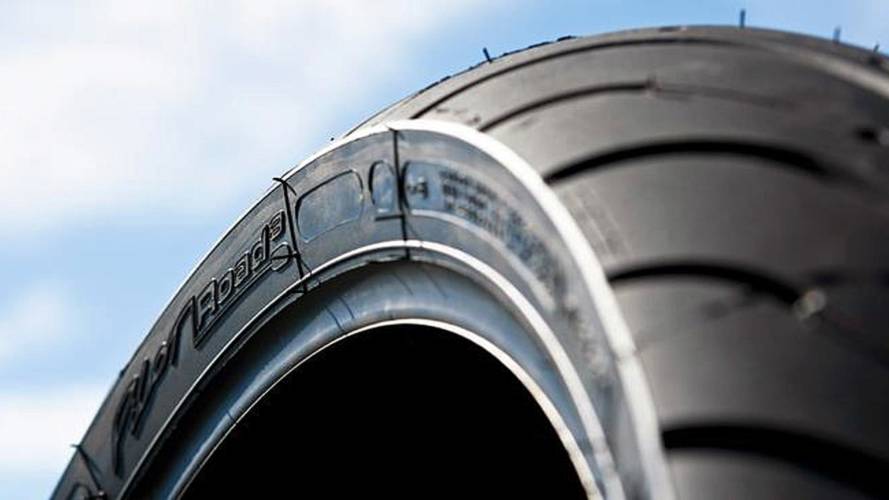 This week we celebrate the 26th anniversary of radial motorcycle tires. Get the history behind the technology.

Each week RideApart looks back to highlight key milestones in motorcycling history from innovations to significant model introductions to racing successes and, of course, some of the disastrous things we’d rather forget. This week it’s the 26th anniversary of radial motorcycle tires.

We’ve all come to take tire technology for granted. Despite being the one thing that separates us from the road, tires also play an absolutely crucial role in how your car or bike handles and performs.

Cars have been running radial tires since the early 1950 when Michelin first patented the concept in 1946. But it wasn’t until the 1980’s that the first ever radial tire appeared on a production motorcycle. Quite why it took that long for motorcycle tire technology to catch up with cars and trucks is still a little unclear.

Michelin still sticks by its guns and says it was first as it had a big research program launched in the early 1980s developing a radial tire that could cope with the ever-increasing performance of modern motorcycle engines.

The actual concept of a radial tire does though belong to Michelin, as its engineers came up with the idea for automotive tires in the 1930s. The premise was simple; radial tires had widely spaced metal cables placed in the sidewalls unlike cross-plys, for strength and were far better able to withstand and dissipate heat build-up. As a result, a radial tire remains softer and delivers consistently better grip under cornering. It also offers improved rider comfort and is far more durable than a cross-ply

In 1946, Michelin took out a patent for radial car tires and in 1951 the first production car – a Lancia Aurelia – was offered with Michelin radial tires as standard equipment. However, it would take Michelin until 1987 – some 36 years later – for its motorcycle tires  to reach the same level of technology.

Michelin claims its program for radial motorcycle tires began in 1981. With the majority of the development work undertaken at the race track with three-time World Champion Freddie Spencer running a single radial tire on the rear only of his Honda 500cc HRC for a season.

Spencer said: “The introduction of the radial tire was the most important innovation of my career. A rider needs grip, feedback and longevity and the radial represented a real improvement in all three areas.

“The first thing I noticed about the radial was that it gave me much better grip and stability when cornering rapidly. I could re-accelerate sooner, which I always tried to do when racing.”

In 1984, the following season, Randy Mamola became the first ever rider to win a motorcycle Grand Prix on all radial Michelin tire shod bike.

This though was the precursor development work and build-up to Michelin launching, in 1987, a small range of production motorcycle radial tires called the A59X and M59X. But there were only five types available – two sizes for the front and three for the rear.

At the time this is what Michelin said about the A59X and M59X’s introduction:

‘Since 1981, Michelin has been experimenting with radial technology as applied to motorcycle tires. Before that date, sidewall rigidity had been obtained by a conventional cross-ply structure that prevented the tire from collapsing against the hub when the motorcycle tilted during cornering.

‘The first radial tires were tested in races and very quickly proved their effectiveness, enabling Gilles Burgat to win the Trial World Championship on Michelin radial tires in 1981.

Then in 1985, Freddie Spencer won titles in two different Grand Prix categories. That year, all leading speed and endurance riders competed and won on Michelin radial tires, demonstrating the validity of this architecture.’

The next stage in radial tire development saw Michelin, in 1990, introduce silica into the rubber tire compound to resolve the early problems of finding the right balance between grip and rolling resistance, without adversely affecting the tires’ grip. By adding silica, Michelin was also able to improve a tire’s performance in the wet and improve its grip.

Dull though tire technology and development may sound, it has actually allowed bike manufacturers to look at new innovations and engineering solutions they would not have ever considered if we were still running around on cross-ply tires. Radials have allowed motorcycle engineers and designers to push the boundaries in a huge variety of areas with the result being that we are riding improved handling, faster and better engineered bikes than ever before.

Have you ever experienced a motorcycle with cross-ply tires? What would you like to see as the next innovation from the motorcycle tire industry?