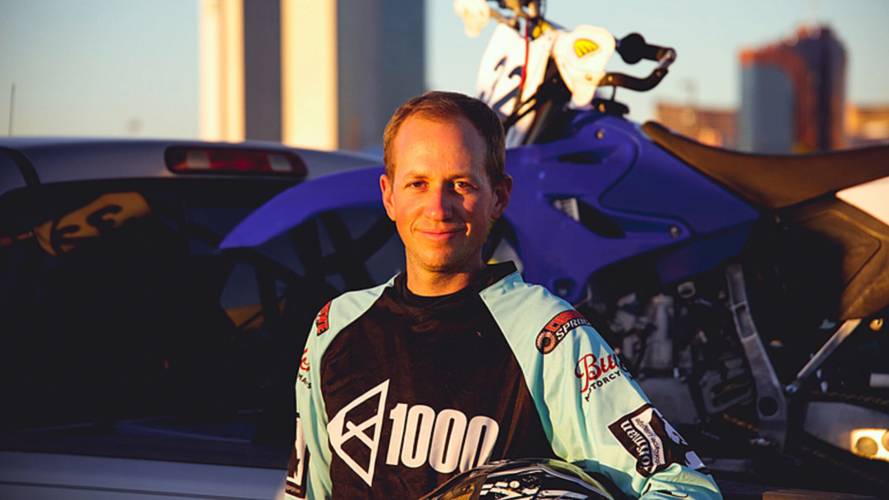 Guest contributor Geoff Chain decided to try his hand at EnduroCross with less than a week of training and one practice lap. What could go wrong?

EnduroCross has always had a draw for me. It became a bucket list item years ago when I watched some of the original races at The Orleans Arena in Las Vegas. So, when my buddy Matt called to tell me his friends at WESTx1000 were looking for an amateur racer, he got my attention. Then he asked if I was up for it. As a long-time expert level Trials rider and single-track aficionado, maybe I had a fighting chance at surviving the gnarly Super EnduroCross course, despite only having just over a week to plan and train. I said, sure, why the hell not? I have a strong background in moto trials, mountain biking, and enduro riding, which should give me at least a good starting skillset to ride EnduroCross. Right?

But here’s the thing, I’ve never ridden an EnduroCross track in my life. I have completed about four laps total on an easy MotoCross track, but had yet to race gate starts. Due to some lingering elbow issues, I only rode a handful of times in the preceding months. With such short notice, I scrambled to get my 11-year-old ridden-hard-and-put-away-wet Yamaha YZ250 as dialed in as possible so I could start practicing on a track.

There’s only one public EnduroCross track in Arizona. and it happens to be just outside of Phoenix. That wouldn’t be a problem in the winter months, but this was early August and temperatures were constantly in the 100s. My good friend Jessie agreed to suffer in the heat with me and act as my cheering squad in exchange for some frosty beverages. I was in for a rude awakening with just how difficult – albeit rewarding – EnduroCross was going to be. Despite my history in Trials, where I’m normally hopping around on rocks bigger than cars, I immediately dropped the bike in a technical rock section. And then again in the log matrix – a section designed for failure by laying logs at different intervals which are never accommodating to a bike’s wheelbase. I struggled to make it around the track cleanly. But after taking a short break, I went out and tried to dial-in different sections of the track before loading up the bike and getting the hell out of this blast furnace we call Arizona summer.

I rolled into Las Vegas early Friday afternoon before the event and met up with my sister Laura, who would also be my amazing mechanic and self-titled Water and Snack Mule. Shortly after, we headed out to the official Track Walk and Meet & Greet with the EnduroCross organizers. Walking the track is an entirely different experience compared to looking at it from the stands. Everything seems twice as large. You realize all the logs and rocks are slicker than a used car salesman, and the soil is hard-packed – just a step above ice in traction. I felt I could do all the obstacles though, which was reassuring. As a bonus, or detriment depending upon your level of masochism, there was an absence of the always treacherous and entirely unpredictable Firewood Pit: a section where they dump firewood that likes to flip up and pitch you off the bike.

Saturday morning came around, and after scarfing down the typical $30 Las Vegas room service breakfast (oatmeal and eggs), we headed over to the track to do some final checks on the bike and get ready for the first practice. WESTx1000 was eager to slap a custom jersey on me, so with the help of CushDrive Sprockets, Butler Maps, Wolfman Luggage, Trailmaster Adventure Gear and Moto Lab, I sported C-H-A-I-N on my back. There I was, excited to be lined up with such formidable riders for my first ever EnduroCross, almost straight off the couch and aboard a worn-out YZ250. What could go wrong?

The course marshal came out and quickly started sending us off one-by-one for our open and un-timed practice. I picked my way around the track, focusing on staying loose, figuring out the lines, and trying to be smooth. The second practice, which was timed for position at the start of the following qualifier race, was less than stellar. I killed the engine in the rock pile and dropped the bike in the matrix. I thought I was supposed to be good at the technical sections? I finished the practice with the worst gate pick spot for qualifying, the second row. Gate pick in EnduroCross isn’t a huge deal with all the other mayhem that ensues throughout the race though, so who cares?

Finally we were lined up for the qualifying race. When the gate dropped, I managed to squeeze myself in front of a couple riders in the first turn. The group all made it over the first few obstacles, but several people got hung up in the rock corner and log matrix so I was able to pick up a few positions. Finally, those trials skills started to pay off! I maintained a smooth pace for the remainder of the laps and picked off a couple more riders finishing 7th. Not bad. Except, only the top three riders transfer straight to the Amateur Main event, which meant I had to compete in the Last-Chance Qualifier (LCQ) where the top two riders would join the bunch. Finishers in the 3rd through 6th positions would race the Amateur B Main in the evening.

When the gate dropped for the LCQ, I once again landed in the back of the pack. Perhaps it was the multitude of fully sponsored MotoCross racers in the field? Perhaps not. All went well for the first few obstacles – I started picking up spots – until a few riders fell in-front of me in the log matrix, ruining my rhythm. Another fallen rider later in the course forced me to take a poor line in the rock pile section, resulting in a wedged front wheel, which seemed to cost me hours. Despite being happy with my performance in the first qualifier, I finished dead last in the LCQ. No night show for this off the couch racer, but sometimes that’s how things roll.

I wasn’t satisfied with my performance in the LCQ, but I was pleased overall with my effort at the Super EnduroCross season opener. Even though this was considered one of the easiest tracks to date it was still one of the hardest things I’ve ever done. EnduroCross is extremely difficult and frustrating when you drop the bike all the time and struggle to even complete a lap, but it is also extremely gratifying when you do it, as there are very few people that can even make an attempt. When you see professional SuperCross and desert racers also struggle, as they did in my class, it makes you feel pretty damn good that you can mix it up with some of the best in the world.

So, if you want to train for EnduroCross, the best way is to ride an actual EnduroCross track. Since those are few and far between, I think the best way is to spend time riding Trials – great practice for balance, timing, and building technical ability to get over the logs and rock piles. Putting some (maybe more than some) laps in on a MotoCross track – the best way to prepare for the starts and, particularly, the instantaneous focus and athleticism required to be a contender with zero warm up laps – might also be helpful. The latter is what really caught me off guard. With proper preparation and training, I’m confident that I could do much better and make it to the Amateur Main event.

I learned a lot in my short time on the track, and have a newfound respect for those who do this regularly. It’s easy to sit in the stands or watch on TV saying “Oh, it doesn’t look too hard!”, but that’s like thinking you can outrun a grizzly bear. The pros sure make it look easy, though. That's not to say it’s impossible for me to make it to the main event. With a bit of training, it’s certainly an achievable goal.

It’s dire to embrace a certain amount of masochism – ESPN’s Sport Science team calculated that EnduroCross riders could experience accelerations of at least 5 G’s about 115 times, which is comparable to 15 rounds of a heavyweight boxing match – but, if you’ve ever thought about trying EnduroCross, do it. Even if you drop the bike on every obstacle, think you’re going to throw up, and maintain the heart rate of a hummingbird the entire time, it’s worth it to know that you’ve survived such an excruciating race. Very few people will ever be able to say that.