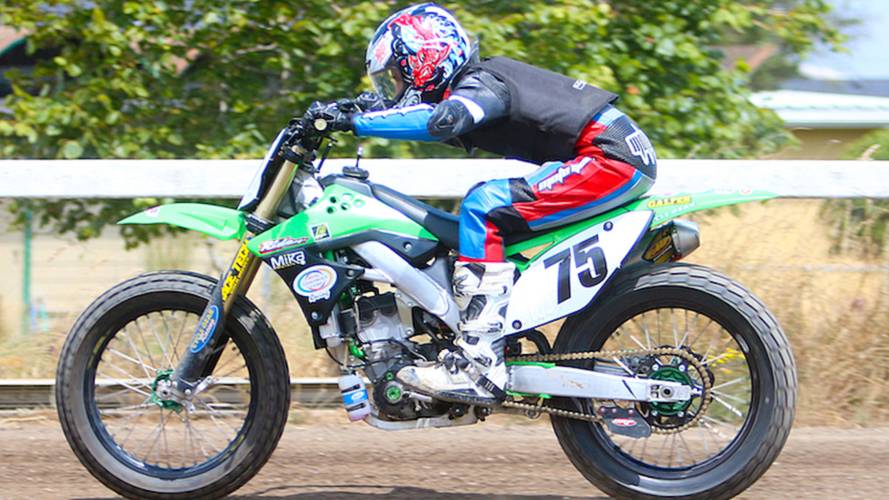 Inspired by the deaths of several young racers a California group has formed with the mission of improving safety in flat track.

Group spurred to action by a number of young rider deaths

In recent years, flat track has seen a sharp increase in popularity. But unfortunately it has also seen a sharp rise in fatal accidents – particularly involving young racers.

In 2016, the Santa Rosa Mile resulted in the deaths of Kyle McGrane, 17, and Charlotte Kainz, 20. This past April, AMA racer Jamison Minor, 21, died as a result of injuries sustained at the Charlotte Motor Speedway during the AFT Singles Final of the AMA Grand National. Later that month, 10-year-old Zaden Florez of Salinas, California, died en route to the hospital after a racing accident at the Lodi Cycle Bowl.

It was waking up to the news of Florez that spurred Brian Bartlow to action. A racer, dirt and flat track instructor, and firefighter paramedic, Bartlow has seen a lot of deaths and injuries in his time, most of them senseless. He said that in the racing community one often sees and hears about these things and feels badly, but it feels like there’s ultimately not much you can do. With Florez, however, it became personal. Bartlow felt compelled to make a change.

On Easter Sunday Bartlow was on the phone with Randy Kremlacek, CEO of the California Flat Track Association, and the two talked for hours about what they could to to improve rider safety. A week later they had formed the Flat Track Safety Group, a nonprofit organization seeking to keep riders safe at flat track and motocross-type events. The group focuses on several areas of concern including: promoter education, parent education, event management, rider training, and updating safety gear.

FTSG has spent time researching what was going wrong, and how these problems could be addressed. The group found that the bulk of major life-threatening injuries affecting riders are thoracic injuries (below the arms), spinal injuries, and head injuries. Thoracic injuries in particular seem to be a problem. This may be due in part to the fact most racers compete with no protection for the sides of their torso. But in dirt competitions riders are most frequently hit by other riders when they’ve gone down and are trying to get off the track. The result is more often than not a strike to their side, frequently breaking ribs and puncturing lungs.

Since no motorcycle-specific gear protects this part of the body, FTSG turned to other channels and found safety vests designed for bull riders, which some motocross and pro riders were using. Designed to lessen the impact of getting hit by a 1-ton horned animal, the performance specifications fit well. Conversations with various companies led to FTSG commissioning a manufacturer and designing the Protect 360 vest. The set-up allows FTSG to distribute the protective gear at a lower cost.

Meanwhile, a Guardian Angel program allows people to sponsor kids and provide them the gear at no cost. Many supporters and have stepped up and donated to help a kid they don’t even know ride more safely. Gordon Pull of CycleGear also chipped in, donating 25 sets of elbow and knee protectors, which the group passes out at events to those in need.

In addition to crash protection, FTSG are addressing prevention by investing in more thorough rider training. Bartlow pointed out that falling down wasn’t hurting people so much as being hit by other riders suffering from target fixation. The training program consists of drills that teach what target fixation is and how to avoid it. Exercises involving cones to simulate downed bikes and riders on the course allow students to practice the art of actively avoiding tunnel vision.

“Some of the AMA districts in Tennessee and Wisconsin have implemented (our) target fixation drill," Bartlow said. "I got a phone call from them saying... that they had 50 students and they all said it was the best training they’ve ever had at any kind of motorcycle riding school.”

Rider education extends to parents, too. The group aims to make sure parents don’t mistakenly believe that all a kid needs is a set of leathers and a helmet. Leathers help with road rash, but do little to protect from thoracic injuries. Kids won’t be allowed to race if they don’t have adequate safety gear, and the necessity of the gear is communicated to the parents. Equally FTSG tries to encourage parents to avoid pressuring their kids to move too quickly to bigger, faster bikes, and has proposed a safety committee and points system to ensure young riders don’t move beyond their current skill level.

To further prevent rider injuries, the group has drafted a Corner Worker Training Manual to help people flagging at the events better understand their duties and role. This is an important step in improving since there's traditionally been no formal training for corner workers, and it can be easy to get caught up in watching the action of a race. However, just few seconds can make all the difference in whether riders have adequate time to respond to an incident on the track.

For when injuries do occur, the group hopes to implement better safety procedures at the track. For example, many people don’t know the difference between an ALS ambulance and a BLS ambulance, but that can be important when accidents happen. FTSG wants to educate promoters so they can ensure they have the right kind of ambulance at their events, as well as be aware of things like the location of the nearest fire station, the nearest trauma center, what helicopter service is available, and where it would land if something went wrong.

Much of the battle to improve racing conditions is rooted in changing the culture. If the next generation of riders learn to ride in more adequate gear and follow a more proactive protocol when they see a downed rider, they’ll pass those habits on to their kids. Bartlow says it’s more challenging with some of the adults, who have reacted to safety suggestions with something to the tune of: “Thoracic protection? Shit, I wear a chest protector, and I haven’t been hurt in 30 years.”

“There’re two types of riders: riders that have been injured, and riders that are gonna be injured," Bartlow says. "There’s not an in between.”

The Flat Track Safety Group has posted their Corner Worker Manual and sponsor information on its website, as well as information on how to get a hold of aProtect 360 vest: www.flattracksafetygroup.org