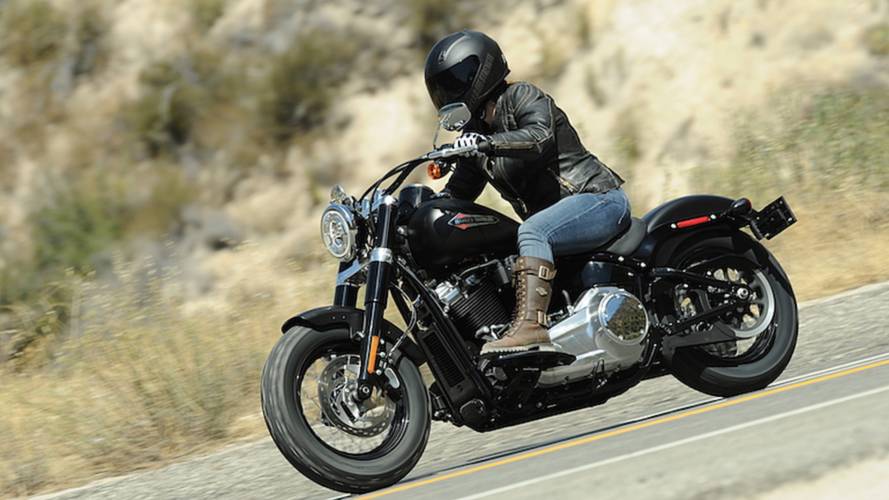 Bobber-styled machine part of an overhaul of the Softail line

When news hit a few weeks ago that Harley-Davidson was getting rid of the Dyna line, many people were surprised at the bold move. But truthfully it was even bolder than that; Harley got rid of both Dynas and Softails, and simply kept the Softail name.

At least I think that's the best way to describe the changes; it feels like Harley has started from scratch. The company took the best attributes of each platform then brought in a new chassis, a new engine, and a new suspension. And it all amounts to a lighter, faster, better-handling big twin cruiser.

I got a chance to spend a few days in Southern California testing all of the new Softail lineup and have decided to break down the changes in three different articles. Here I'll be looking at the chassis via the Softail Slim, in the coming weeks I'll take a look at the new engine from the rider's seat of a Breakout, and the new suspension from the vantage point of a Fat Bob.

When I think of the Slim I can’t help but want to call it "Slim Fast." No, I’m not talking about the weight loss drink so many raved about in the 1990s. I’m talking about the game-changing kind of weight loss that came from a redesigned chassis, 22 percent fewer welds, and lighter-weight materials. The 2018 Slim has dropped 35 lbs compared to last year’s model.

"Slim Fast" is a perfect way to describe the moment I first experienced the 110 lb-ft of torque from the 1753cc Milwaukee 8 engine for the first time. Now with an increased power to weight ratio thanks to weight loss and beefed up engine, the Slim does go Fast (For more info on the 2018 Softtail engines stay tuned for my next review on the 2018 Softail Breakout.)

With less of a straddle and low seat height the Slim now fits a broader range of riders and makes a nice step up for someone wanting a bigger V-twin cruiser. Don’t let the Low Rider’s name fool you; the Slim claims the title of the lowest seat height in the Softail lineup, at 25.5 inches (whereas the Low Rider's seat height is 26.2 inches).

Softails are known for their lower center of gravity. However, by creating a new chassis and moving the oil pan from under the seat to under the engine, the bikes' center of gravity has been improved even more, as well as the lean angle.

What better way to highlight the improvements in handling than through endless miles of switchbacks along the Angeles Crest Highway? The Slim was nimble and the 16-inch wheels responded well around corners. The lean angle has improved to 27 degrees – achieved mostly by raising the boards and pegs.

I have a confession to make: before this press event I had never scraped the pegs on a big V-twin.

(I find this hard to believe. Leah has put in thousands upon thousands of miles crisscrossing the United States. In the summer she effectively lives on her Indian Scout, staying on the road for weeks at a time. So, I think she's stretching the truth here for narrative effect – CC)

I had always wondered what it would be like, or even how I would react the first time. Would my balance be thrown off? Would I panic and scream? These questions were answered as a pack of moto-journalists raced through the tight switchbacks. In an effort to keep up, I took a corner, cutting it a little harder than normal and heard a loud: "KKKKRRR."

I wondered what the noise was, then realized: it was me scraping my pegs for the first time ever! My helmet soon filled with a beaming, squished-cheek smile!

Ecstatic, at the next stop I hopped off the bike and crouched down to check for battle scars. Sure enough a lovely scratched-up peg was under my floorboard.

Another rider chuckled: “Wow. The little things that can make a person’s day.”

I'll give Harley-Davidson credit here: the company realized a weakness in the suspensions of past models and addressed it. The high-performance rear mono-shock suspension is hidden under the seat and easily adjusted. (For more info on the 2018 Softtail suspension stay tuned for my final review on the 2018 Softail Fat Bob.)

The Slim has a four-piston fixed brakes gripping a single disc up front and a two-piston floating rear caliper set-up gripping the read disc. ABS is standard on European models, and a US $795 option in the States.

As part of its makeover, the entire Softail lineup got some fun added features, such as LED lighting for improved vision. My personal favorite feature is the assisted clutch lever. I noticed the difference it made when trudging through L.A. traffic. This should be a feature on every motorcycle. Without sounding too ladylike here, I lack the hand strength of most men, which makes repetitive shifting fatiguing. Something like this goes a long way in ensuring I can ride just as far and just as long as everyone else.

However, I felt more vibration in the hand grips than I would like. Yes, the new Softail lineup is collectively smoother riding than in the past, but I think there is always room for improvement. Some of the bigger framed guys on the ride said they didn’t notice, so it might be possible to work out some easy solutions.

The Slim is a classic bobber-style bike with a modern feel. The new 2018 model has blacked out sections, and as one of those notorious millennials, I personally like the look. It's not gaudy and highlights the powerful Milwaukee Eight.

Naturally, I can't help comparing any bike I ride to the Indian Scout that I've relied upon for the past few years. The Slim would be an interesting "upgrade" and I'll admit to daydreaming about it. I personally still prefer my lighter (550 lbs) machine, despite its smaller tank. But guys, if you're trying to get your significant other to take the leap to a bigger V-twin, the Slim is certainly the way to point them. They will appreciate the lower center of gravity and better handling of the 2018 Slim, even when compared to "smaller" bikes like the Sportster.

I've ridden previous Harley models and never really enjoyed them. Either the center of gravity was too high, I couldn’t reach with my foot far enough to put up the kickstand, it felt too heavy, or it was too slow to pick up speed. Huge kudos go to Harley, then, for nailing it with this motorcycle. This Slim-Fast makes sense!