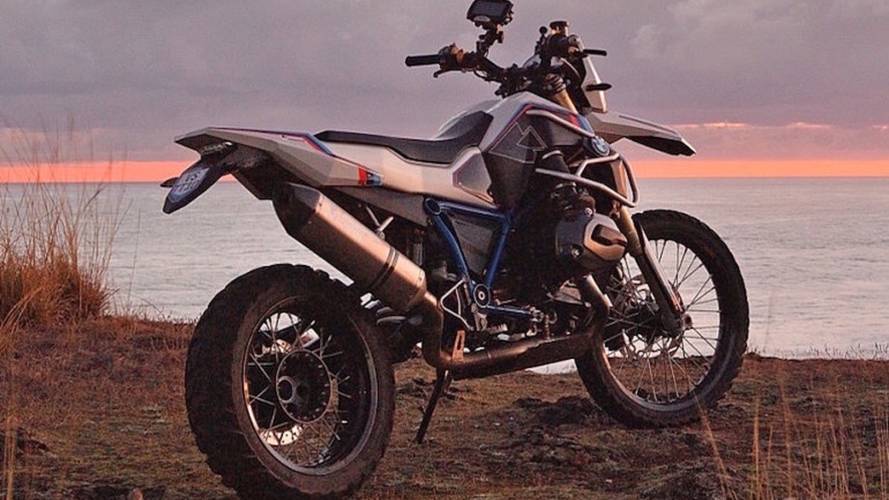 Two of the biggest names in the ADV world partner to create a slimmed-down GS-based concept with a sportier power-plant that's dripping with enduro-flavor.

Two of the biggest names in the ADV world join forces to create a slimmed-down, GS-based concept with a sportier power-plant that's dripping with enduro-flavor.

Fifteen years ago, CycleWorld called the R1200GS, "BMW's most successful motorcycle in the last two-and-a-half decades.” Even today the R1200GS continues to be one of the company's best sellers. In fact, BMW's two best selling models last year were, in most markets, the GS12K and GS12K Adventure. The R1200GS is a beloved full-size ADV machine with a dedicated fan/rider-base. Even elite training programs such as RawHyde Adventures exclusively use the GS in their ADV riding academy. BMW and Touratech’s R1200GS Rambler Concept takes BMW Motorrad’s biggest ADV machine, puts it on a major diet, and then dresses it up in some sexy enduro-bodywork, resulting in more of a dual-sport that almost certainly performs as great as it looks.

Touratech has developed a reputation for producing quality aftermarket off-road/ADV parts and gear. One of the company's greatest marketing assets is the array of custom machines Touratech commissions to have built, obviously featuring an array of the rugged aftermarket brand’s parts. Now, the company did unfortunately file for bankruptcy recently, though according to reliable source at the company, the action has not affected business as usual.

So when looking for a bike to build and customize a concept around the GS was an obvious go-to choice. Pretty much every R1200GS I’ve ever seen has been fitted with at least a few aftermarket goodies – luggage, guards, lights, etc. – so appealing to GS fans is seemingly a worthwhile plan. Despite the Rambler concept not really boasting that many Touratech parts, it’s just an awesome enough large dual-sport concept to be an effective marketing tool.

Around the time the cover was first pulled off the Rambler, rumors began circulating regarding the legitimate possibility that the concept could actually see a limited production run. It has been about a year now though, and the Rambler rumor mill appears to have died down a bit. Touratech did comment at the time when asked about it, responding with a statement saying the Rambler concept was, at least on Touratech’s end, ready to go production-wise. Nonetheless, this lightweight, large-displacement machine is still more than worth checking out if you missed it the first time, and probably worth a second look if you saw it last year.

Weight was a key focus when designing this concept bike, and the design team went all out to help the bike shed some pounds. They used aluminum tubing and carbon fiber for the transitional fabrication, and opted to use components such as a full titanium Akrapovič exhaust system and a light-weight lithium-ion battery to further keep the BMW-powered concept’s weight down. The Rambler design team was conscience of the machine’s weight distribution center of gravity, which needed to be kept low to optimize the concept’s real-world off-road performance. After its crash diet, the Rambler concept weighs in at just over 440lbs, more than 110lbs lighter than the standard R1200GS model.

While the Rambler concept retains the standard GS’s 1200cc displacement, its overall shape is still considerably more slender than the bulky R1200GS. One of the most obvious changes in the GS’s transformation is its enduro-style bodywork – MXer-style high-mounted front fender, enduro-style seat, and a 4.75-gallon tank shrouded in custom bodywork protected by crash-guards. Despite single-sided swingarms almost always being heavier than traditional dual-sided swingarms, the folks behind this concept still opted to go with the GS’s single-sided unit found on the best-selling BMW, along with its classic spoked rims. The highly competent off-roader concept was introduced in two paint-schemes – Touratech's trademark black, grey, and yellow scheme and BMW's classic red, white, and blue livery.

The Rambler concept would have been plenty impressive if it was just a cosmetic custom, but the power got an upgrade, too. The donor R1200GS’s sturdy 1200cc boxer was swapped out in favor of an R1200R Roadster power-plant. The Roadster’s engine still uses a very similar layout to the R12KGS, but it has slightly higher power figures. The Rambler's transplant mill was then tuned to 125hp and has a top-speed that’s a tad faster than the R1200GS as well. According to Touratech, the Rambler concept features extremely responsive power delivery with its high-torque drive-system that likely pairs incredibly well with the concept’s light weight.

The Rambler also got a bit of a suspension makeover. Instead of using the standard GS’s Telelever system, the Rambler is fitted with a conventional fork that significantly sharpens the bike's handling. The dual-sport is clearly a competent dirt-goer, but Touratech didn’t neglect to equip the concept with a license-plate, headlight/tailight, and indicators. Despite it’s off-road appearance, it would be a shame to overlook the Rambler’s street-friendly performance. Performance that’s almost certainly a blast in the canyons thanks to the Roadster’s engine and the bike’s relatively light weight.

To check out more photos of BMW and Touratech’s R1200GS Rambler Concept, you can cruise on over to Touratech’s Rambler Webpage. I’m confident that if BMW did a small production run of these concepts, they would likely sell pretty well, especially as a limited edition model. I’m not much of a dirt or ADV guy, but damn is the GS Rambler Concept one seriously cool bike.

If you know of a machine that you think deserves to be RideApart’s next Bike of the Week, drop us a line at info@rideapart.com.