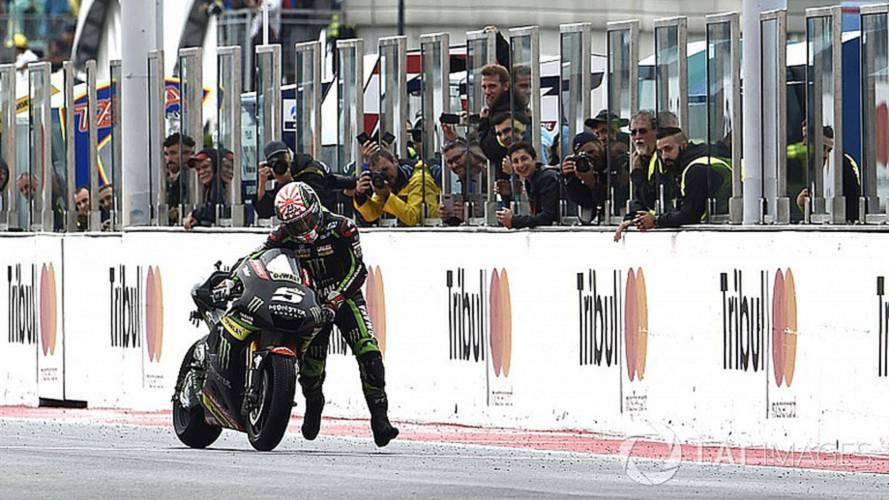 Johann Zarco's Yamaha ran out of gas on the last lap of the San Marino MotoGP, but he pushed across the line for one championship point.

MotoGP rookie Johann Zarco looked set for a seventh place finish at Sunday’s San Marino Grand Prix, until his Yamaha ran out of gas. The Frenchman still managed a 15th place finish however, and one GP point, by pushing his machine across the line. Zarco remains in sixth place in the championship point standings.

"From the last corner I had to go down next to the bike and run, and it was long,” Zarco said. “I knew that there are two lines, the start line and the finish line. The finish line was really far" The crowd cheered him on along the lenghth of the straightaway.

Former MotoGP champion Jorge Lorenzo had less luck in the rain-soaked race. The Spaniard had a great holeshot on the Ducati and was gapping the field until he highsided on the lap seven, handing the lead to Pramac Ducati rider Danilo Petrucci. The non-factory entry held the lead until the last lap when Honda’s Marc Marquez logged the fastest lap of the race and took the victory. Andrea Dovizioso on the works Ducati came home in third place, putting himself in a tie with Marquez for the points lead.

"In rainy conditions you never know, but I was trying to control all the race, trying to control myself because I was able to be a little bit faster, but I said 'you must be patient’,” Marquez said. “For a moment I thought of staying in second position. Then on the last lap I said 'I try'. This championship is really tight and five points can be a lot in the end.”

Yamaha’s Maverick Vinales finished fourth, putting him third in points going into the next race on his home ground in Spain. His teammate Valentino Rossi missed the race, having broken his ankle in a dirt bike accident two weeks ago. Despite speculation that he might be able to return to action for Round 14 at Aragon in Spain, Yamaha has announced that Rossi will still be recuperating from his injuries. Although the former champion is making good progress, he will likely stay off the bike until the Japanese MotoGP at the Twin Ring Motegi on October 15.

Rossi’s factory seat at Aragon will be filled by Yamaha‘s WorldSBK rider Michael van der Mark. The 24-year-old Dutchman is a three-time winner of the Suzuka 8-Hour, and is well-acquainted with the Spanish circuit. This will be his first opportunity in MotoGP, and he will be supported by Rossi’s regular crew.