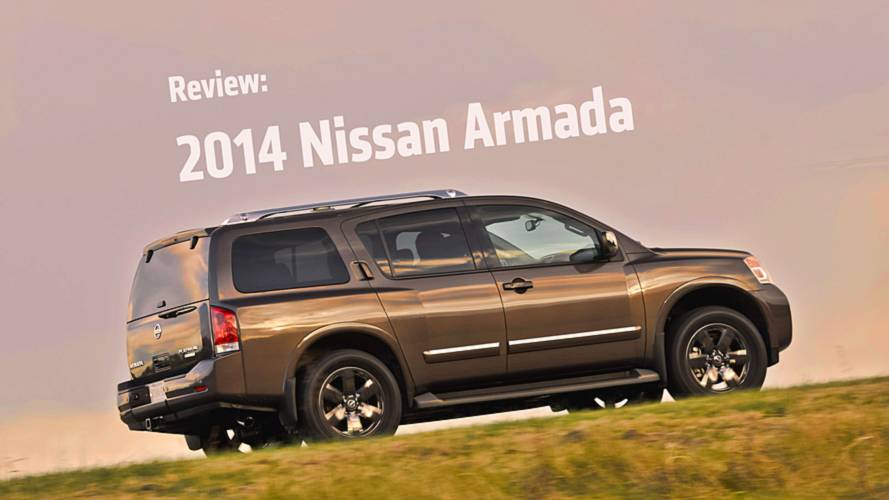 Can the body-on-frame 2014 Nissan Armada still hack it in a sea of much newer seven-seat SUVs? DriveApart finds out.

Do you have a favorite dinosaur? I was always partial to Brontosaurus. Though he was a docile plant eater, I liked his tiny head and long tail. My buddy Scott was a big fan of Tyrannosaurus Rex, but those tiny arms freaked me out. My brother Josh worshiped the Velociraptor, but I wrote that one off as too trendy. No, give me a big old lumbering Brontosaurus, and I'm a happy camper.

Why do I bring this up? Because that's about how relevant a full-size SUV like the Nissan Armada is going to feel in a very short while. Maybe it already feels that way to you. I still have a lot of affection for full-size SUVs - but not based on my current needs or tastes.

As a motorcyclist, I've come to hate and avoid Nissan Armadas on the road. Their drivers inevitably seem to be oblivious of other vehicles in their surroundings, and while the command driving position is quite ego-affirming for the SUV driver, it's a disaster for motorcycles.

Armada has been around since 2004, initially as the "Pathfinder Armada" and then as the "Armada" since 2006. It shares its body-on-frame construction with the Nissan Titan. OK, that's a point in its favor for motorcyclists. As a body-on-frame SUV, Armada 4x4 is capable of towing up to 9,000 lbs with a maximum tongue weight of up to 910 lbs.

Sharing its body-on-frame platform and V8 engine with the Titan pickup, the 2014 Nissan Armada is a real workhorse.

Also on the plus side is Armada's cargo capacity. Behind the third row, there's room for 20 cubic feet of gear. Use the power fold function on the Platinum edition, and 56.7 cu.-ft. of gear will fit behind the second row. The Full Monty, both second and third row seats folded flat, leaves a 97.1 cu.-ft. cave for stuff. The weight limit is about 1,459 lbs - almost 3/4 of a ton. Another plus is the flip-up glass hatch on the liftgate. You can access the cargo compartment without opening the whole liftgate, and even carry long pieces of lumber or accessories. This is a feature that has gotten priced away from many SUVs, but is very convenient and desirable.

The cargo space isn't perfect. The load floor isn't completely flat when the seats are folded, especially in the second row. There are big gaps where cargo and pets can get hung up. Still, the interior of the Armada is really nicely finished, with deep carpeting and nice details in the side walls. That sounds great - but if you're looking for rough and ready space, you're going to have to invest in some fitted cargo mats and figure out how you're going to protect that nice interior. One sloshy gas can and a few pairs of greasy motorcycle boots, and the resale value of your nice Armada is going to plummet.

The downside of the old-school approach is limited interior volume.

Hauling cargo and towing effectively requires more than a robust frame and useable space - you also need a powerful engine with a good transmission. Armada gets the familiar 5.6-liter V8 (317 hp/385 lb.-ft. of torque), hooked up to a five-speed automatic transmission. My test vehicle came with four-wheel drive and a tow/haul mode (standard on the Platinum 4x4 edition). Without a load, the power feels adequate. Armada is a great big heavy dinosaur, weighing in at 5,841 lbs (nearly three tons!) Add a trailer to that, and you may be wishing for a diesel engine or more displacement. No such luck.

In "Platinum" trim, the 2014 Nissan Armada remains a nice place to while away hours spend in traffic.

Believe what you will, but some scientists say that the dinosaurs were driven to extinction by a massive environmental catastrophe. Maybe an asteroid hit the earth, maybe the earth's axis shifted and the planet cooled. Who knows? Rising Corporate Average Fuel Economy (CAFE) standards have boiled down the crop of full-sized SUVs like a frog in a pot of water, and now there are just a few left: Armada, Chevy Suburban, GMC Yukon XL, Cadillac Escalade, Toyota Sequoia and Toyota Land Cruiser. In a few years, they'll all be gone. Full-size pickup trucks with crew cabs offer nearly the same level of comfort for five passengers, and usually offer superior utility for motorcyclists.

You won't forget the Armada is a genuine truck while driving it.

If you've got to haul seven passengers at once, and you need to tow at the same time, Armada can do the job, and can do it in comfort and style. Just be aware that you're driving a dinosaur. And please, watch where you're going when you drive it. Don't become part of the problem when you switch out two wheels for four.