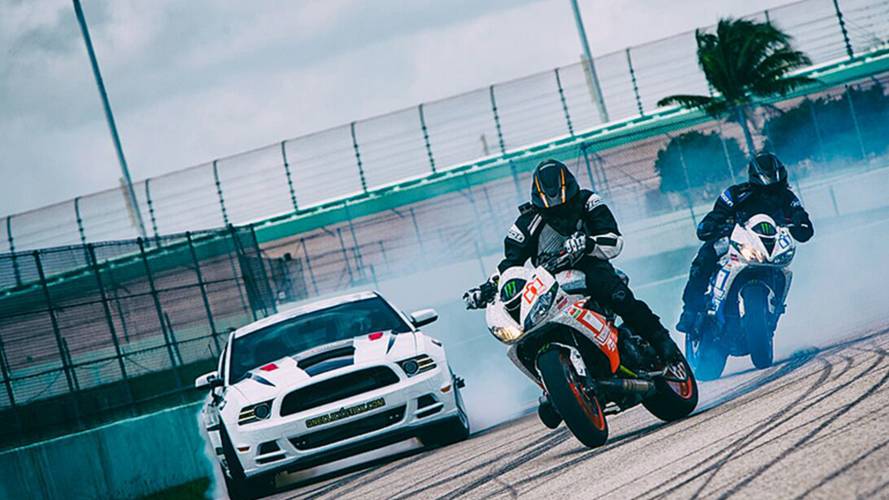 Do you even drift bro? Forget about the four-wheeled variety, we’re talking motorcycles. But yeah ok, there are cars here for you petrol-heads.

READ MORE: Watch Harley-Davidson Rider Crash into a Light Pole During Ride of the Century - This is Why...

Nick Brocha and Ernie Vigil get down and sideways on the pavement in some of the most impressive ways possible—wrestling beastly liter bikes. I know if I tried to do this I would kill myself in the worst way possible.

READ MORE: Living the Ducati Life… If Only for a Day

For those that don’t know Nick Brocha and Ernie Vigil, they are two badass stunt riders. But beyond their uncanny ability to thrash motorcycles and ride like maniacs, they are two incredibly likable guys.

For the latest in the Drift series (catch up on all the videos below), the boys from Garage 7 teamed up with ICON, Castrol, and a slew of other sponsors to cause all kind of mayhem. They also continue where Drift 3 left off.

Directed and edited by Matt Sanders of Phlewid Films and featuring a cameo by Dax Shepard, Drift 4 incorporates some light story telling, vulgar humor, drug running shenanigans, and of course some insane drifting on fully tricked out Triumph's and some good old American muscle. There is also a three-wheeled Scorpion P6 thrown into the mix too.

Consider the next 13 minutes of craziness worthy of your attention.

Because we talk about bikes here at Ride Apart, I spoke to Nick, who is currently in the Peruvian jungle doing who the f**k knows what. He could actually be using an ADV or modded Triple to "keister some smack across the border" (watch the video, you’ll get the reference).

Nick and I spoke briefly about the bikes used in Drift 4. In the beginning, you'll see their run-of-the-mill everyday stunt Triumph Speed Triples, and as the film progresses these two lunatics take it up a step.

Built entirely in-house at Garage 7, the new drift bikes in the latter half of the film are modified Triumph Speed Triples with Daytona uppers and front. Both bikes have been fitted with Garrett turbo chargers, fully mapped Power Commanders, PC5, POD, and ignition modules to keep the symbiosis between the engine and the turbo running straight. Both bikes get a unique livery and signature red and blue color scheme, which have followed Nick and Ernie over the past couple years.

I wasn’t kidding when I said these boys were lunatics.

If you need some backstory and a little excitement in your day, here is the entire Motorcycle vs. Car Drift series: