Suspend your Disbelief: Doctor Who 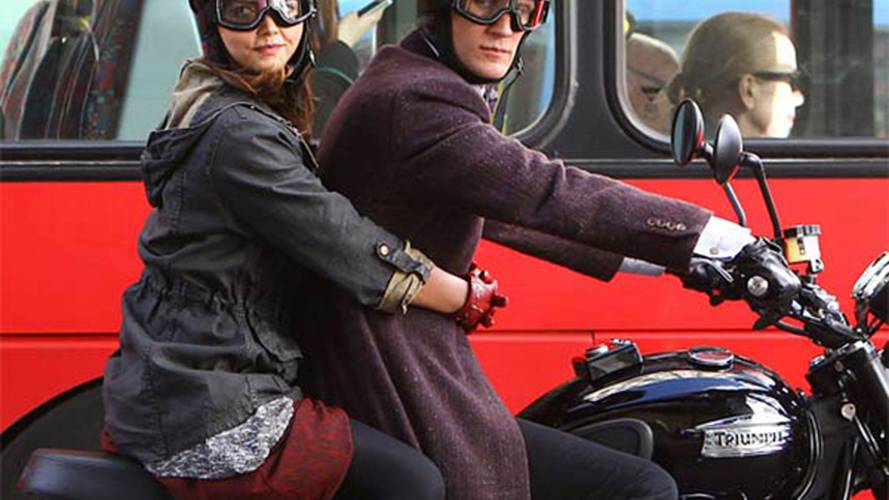 Suspend your Disbelief: Doctor Who"You know that in nine hundred years of time and space and I've never met anybody who wasn't important before." —...

"You know that in nine hundred years of time and space and I've never met anybody who wasn't important before." — The Doctor

Doctor Who is a British science fiction television show created by the BBC that chronicles the adventures of The Doctor, an immortal time traveling alien known as a Time Lord. Along with a female companion, The Doctor ends up in some quirky adventure that requires him saving the human race from destruction again and again. The series originally started in 1963 and was rebooted in 2005 after a 16 year hiatus that reaches a worldwide audience. For 2013 one of the biggest British icons is going to paired with another British icon: Triumph Motorcycles.

The current season of Doctor Who focuses on the 11th Doctor (portrayed by Matt Smith) is the eleventh incarnation of his self, becoming a recluse after 1000 years of traveling the universe. Refusing to interact with humanity to protect it, The Doctor has retreated into his TARDIS in the clouds above earth. The Doctor, without friends, has become a darker individual with little care for humanity or the universe. Without completely spoiling the halfway-finished season 7, The Doctor has returned to traveling the universe after having his faith restored by a certain individual.

As evidenced by the rubber knee pads and flat seat, these images from the set appear to show a Triumph Scrambler, the dirt-capable version of the Bonneville. The Bonneville series of are known for their quality and ability to recapture a classic riding experience combined with modern performance. Replete in black with shiny chrome exhausts this is an iconic representation of British motorcycles. Over the base Bonneville, the Scrambler gains taller suspension, high-mount exhausts and semi-knobbly tires, enabling it to tackle obstacles and go just about anywhere. A good companion, then on The Doctor’s adventures.

We can see from the photos of the motorcycle that there is a box with a large red button on it and I can guarantee you that it will do something unexpected.

The actors who play The Doctor and Oswin are Matth Smith and Jenna-Louise Coleman, respectively. Smith is portraying a quirky immortal time traveler, essentially "a mad man with a magic box." Coleman is portraying The Doctor's companion, his traveling partner, a strong willed intelligent woman who captivates the Doctor's attention. Looking at what The Doctor and Oswin are wearing, we can see a pair of French aviator goggles by Léon Jeantet and a pair of British Davida half helmets completing that retro rocker look.

From what we see out of the season 7 trailers and photos, the Doctor and Oswin ride the motorcycle straight through the TARDIS' doors off on an adventure. Aside from that, we’ll have to wait for the final eight episodes of season 7, airing on BBC in April.

British motorbikes, British people, British motorcycle clothing; this is undeniably British. The Scrambler is a good choice for the Doctor Who series, it is representative of the Doctor's way of traveling anywhere, anytime. It also speaks to how hip and modernized Doctor Who now is. While the Scrambler isn’t as capable as lightweight modern dirt bikes, it is a fun and quirky way to travel, somehow that seems to fit the show just fine.