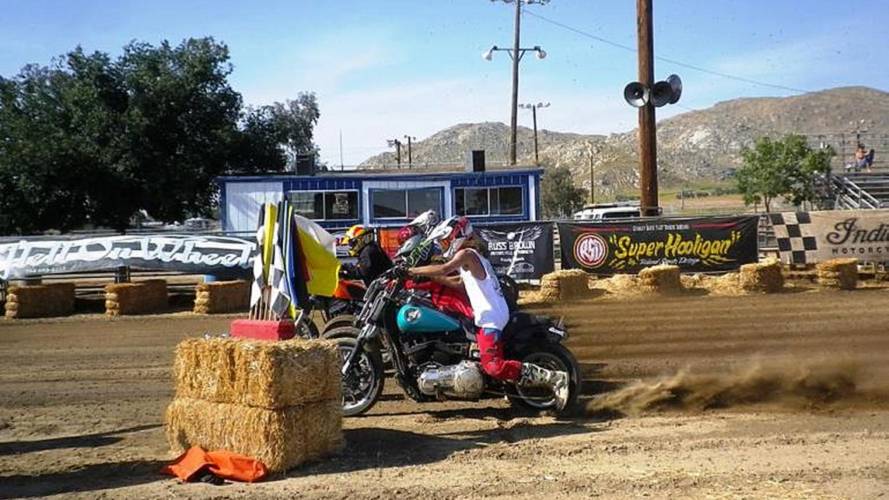 Arte vintage Harley-Davidsons and Indians just for show? Oh, hell no. Not according to these guys.

The way prices are headed for pre-war American bikes at auctions, pretty soon nobody – except hedge fund guys and venture capitalists – are going to be able to afford them. Then like a lot of "collectibles," these bikes are going to sit in the corner of some man cave and never get ridden. These old bikes lack modern power and brakes, and most have little suspension, so riding them on the street isn't much fun. But when racing them around a dirt course against like minded individuals? That's something different...

In a lot of ways, running these bikes at events like the Hell on Wheels MC, or Roland Sands Super Hooligan races, is subversive. The gold chain auction crowd sees these vintage bikes as investments, and pores over the photos in the catalog with a magnifying glass before bidding. These racers are saying: "Screw that, I'd rather race it until it's ground down to a tiny nub than see it sentenced to a life of sitting in a corner and being rubbed with a diaper."

The No. 5 lead bike in the above picture is Go (of Brat Style fame) on a 1939 Indian Sport Scout (I believe), worth about $10,000 in basket case condition. His other occasional racer is a custom Indian Scout, which doubles as an award-winning show bike.

This band of merry miscreants even raced these hardtail, suicide clutch, hand shifted, heavy metal bikes over the rough TT course at Lake Elsinore. Most riders kept the pace sedate, but – despite front-end travel on par with a Schwinn beach cruiser – a few did catch air. Not all of these guys can ride well, and not all of the bikes run great, but they sure put on a show. The roar of a pack of angry flatheads all going flat out sounds like a B-25 bomber taking off, which was very appropriate at the Hippy Killer Hoedown – just a few miles from March Field Air Museum in Perris, California.

Some of these bikes are fitted with a custom hydraulic front end, with billet triple clamps, from Vard Mfg, and they race what they sell. The Vard front end gives the archaic bikes modern trail and damping, not to mention the increased torsional rigidity compared to the old girder/springer set-ups. It is actually an exact duplicate of an aftermarket 1930s fork by the same name.

It is not all antiques at the Hell on Wheels/RSD Super Hooligan events. Pretty much any street bike can race if you are crazy enough to want to race it. There are plenty of Sportster-based bikes out there, and even an 883 picked up cheap from a clumsy owner can be a fun flat tracker. Of course, the fast guys are on Harley Street 750- or new Indian Scout-based bikes. After all, Roland Sands has been tweaking that Indian since before it officially existed.

What began with Hell on Wheels MC holding a once-a-year informal motocross meet with classes for any bike that showed up, no matter how inappropriate on the dirt, has blossomed into a series of varied events. The best way to find out about the next one is to "like" their Facebook Page. This week they will be scrambling in Glen Helen on a natural terrain vintage-type track, and expect another race of some type about a month from now.

Roland Sands' Super Hooligan series started in Southern California, but has exploded around the world, typically in conjunction with big bike events. The next event for these guys is the huge Dirt Quake USA weekend in Washington state, in conjunction with Sideburn, the UK flat track magazine, on July 22nd and 23rd (there is no page up yet for the event). If you are in the Pacific Northwest I hear it is the event to race if you like to have a good time.