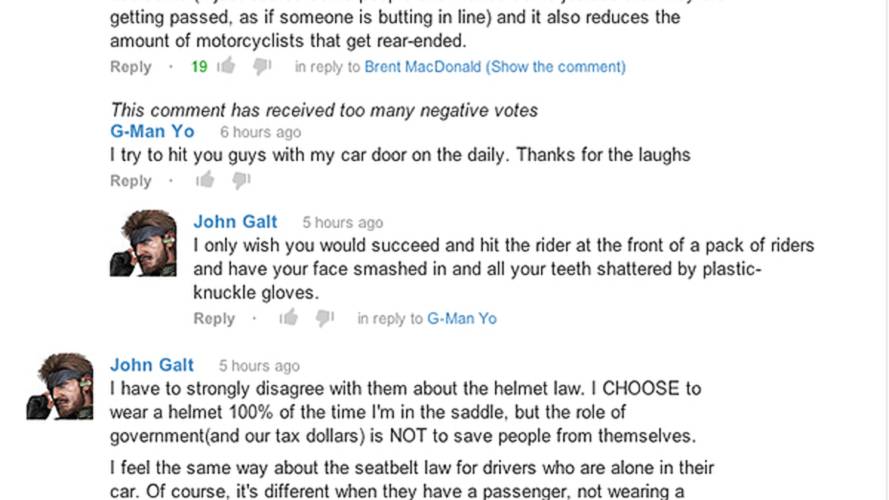 Internet reacts to Lane Splitting episodeLane splitting is when a motorcycle travels in-between the lanes of moving or stationary vehicles. Through...

Lane splitting is when a motorcycle travels in-between the lanes of moving or stationary vehicles. Through studies, it's been proven that lane splitting increases safety for motorcyclists and reduces traffic congestion for cars. It's also a great bunch of fun. Nevertheless, it's always stirred a lot of controversy from all sides. Yesterday's RideApart episode was no different, garnering over 55,000 views in the first 24 hours alone and creating a massive, Internet-wide debate. Here's some highlights of that.

1. "Try learning how to drive. That might help solve your problems." - Marimivibe, Jalopnik

2. "As a motorcyclist and a londoner i'm amazed lanesplitting is so villified in the USA. I can personally think​of one incident where it's saved my skin, when a transit van went into the back of a car at a red light literally just after I filtered past." - Vracktal, YouTube

3. "RideApart is encouraging me every day to​get a motorcycle license." - nukeman13, Youtube

4. If only.​If more people rode motorcycles it would be a much safer and happier world." - Jeremy Blanchard, YouTube

6. "I don't support SHIT for motorcyclists. They think they are above the law and regularly get away with an absurd level of bullshit. At the very least you should realize that you weigh a few hundred lbs and I'm in a 1-to-4 ton vehicle ... That means that you need to yield to me for your own safety. Same for bicyclists and runners/joggers/walkers. Don't like it? Fine ... Just don't bitch when I'm popping out a dent while your family recovers your remains with a spatula. I hate to be so blunt about it but I'm sick of this argument." - Gideon35t, Jalponik

7. "Say i'm sitting at a red light, my door is not closed all the way, so​i open it to shut it hard and motorcycle runs into my door, not my fault. And lane splitting is illegal anyways." - PeytonRobinson, YouTube

8. "Anyone intentionally taking action to harm a motorcyclist while lane splitting is essentially committing attempted murder. Cars are considered deadly weapons if used to harm another person. As for doors opening on the freeway, that very rarely happens and only in completely stopped​traffic (who opens their door going 15 mph in traffic?). So the only people opening doors have a homicidal hatred for motorcyclist." - legoflamb, YouTube

9. “Not just no, but FUCK NO! The only way I would agree is if the car drive is absolved from any responsibility from hitting the bike with the side of the car. Car drivers who ride in your blind spot are bad enough, but a bike that suddenly appears in it? I nearly took out a car today on my left. I was going to change lanes, had my signal on, but he ignored it, and            tried to go around me just as I changed lanes. He went onto the shoulder, to bad he didn't hit the wall!" - SidewaysByChoice, Jalopnik

10. "ok I want to preface this by i stopped the video at about 7-8 minutes and I'm not a motorcycle rider. As a Car driver please understand a few things:

1. Blind spots, you guys scare the hell out of me and I think I'm going to crush you every time I change lanes if you're near me on the highway. So imagine how I feel when you zip by splitting the lane? Note this was worse when I drove an SUV.

2. It pisses me off when I'm in a hurry and someone gets to jump to the front of the line in traffic.

3. You're on smaller, quicker, and more nimble vehicles and you appear/disappear without warning. Sure it's controlled to you as you do it but it's damn hard to keep track of you in 4 lanes of 70 MPH traffic (Michigan hwy speed limit is 70...which means everyone is doing near 80).

4. You don't even have to wear helmets in Michigan anymore. (though for some idiotic reason I still have to wear a seat belt!)

My feeling comes back more to points 1 and 3, which are pretty close I guess. Is it really so bad that I don't want to crush you? Sure he's "taking his life into his own hands" but I would be the one who has to live with the fact that I CRUSHED a guy at 70-80 mph."

11. "this comment is on page 5 your a troll gtfooh,they are self centered because they think their time is more important than everyone elses,i wont open doors but i will take​my side out of the middle to keep assholes like htis from breaking the law,its against the law where i live ,no way in hell id live in the toilet bowl of a city like L.A.or california" - 4godaddygo, YouTube

12. "You've obviously never driven in LA.... average drivers in LA are borderlined retarded. I can ride just fine, its other drivers who i don't trust. i live in Portland OR, lane splitting is illegal here, however, i find myself wishing i could split lanes here. however, i felt the opposite while on a road trip through LA. riders there lanr split while going at least 35mph faster than flow of traffic... if you condone such actions, you sir are an idiot" - Nick Guarente, Facebook

13. “MOST MORONS THAT GIVE NEGATIVE COMMENTS HAVE NEVER RODE A BIKE. SOME OF THESE IDIOTS HAVE NEVER BEEN OUT OF THE US SO YOU GUYS TRYING TO EXPLAIN THE WAY OTHER PEOPLE IN OTHER COUNTRIES HOW THEY RIDE IS JUST POINTLESS. MOST PEOPLE ALL OVER THE WORLD PEOPLE RIDE SCOOTERS IN MASS NOT BECAUSE THEY PRACTICAL CHEAP TO RUN AN​ ECONOMICAL . THEY ARE FUN. IN THE US WELL YOU RIDE A SCOOTER YOU ARE FAG OR A SISSY.''' - roncervezawhiskey, YouTube

14. "Hey pals, lets find a way to justify the idea that as motorcyclists, we ought to be able to do whatever we want on the road under the guise that we're superior enough in comparison to car drivers that the only safe way for me to drive with some hot girl sexting is if I'm allowed to wiz by her in the same lane, coming closer than any car would ever normally get to her." This is the dumbest logic I've heard of today." - Kimithechamp, Jalopnik

15. "I've been riding since late 2004 here in California and have lane split since the start. At first it was intimidating, but just like anything else you begin to get better at it and gain            confidence doing it. It takes time getting adjusted to the heightened alertness you must have while you do it but once you do you see everything. People brushing their teeth, shaving, applying makeup, reading books/magazines/newspapers, texting, making phone calls, looking for something in the console, and basically anything else you do while driving a car. You learn the characteristics of distracted driving and know when to change lanes/slow down/speed up and pass them to get away from them. I learned so much about defensive riding by doing it that when I once upon a time moved to Texas for a short time and couldn't lane split I felt like a sitting duck with a huge target on my back. That feeling was spot on because no more than a few days of riding went by that I got rear ended in traffic by a girl in her late teens texting. That experience was a major factor when it came to my decision to move back to California. There is no debate in my eyes that would persuade me to think that lane splitting isn't a safer alternative than riding/sitting in traffic." - RT Moto, Hell For Leather

16. "Wes, your mullet has my approval. That is all." - joshtheriddler, YouTube

17. "Not to mention, Lane splitting in my state "Texas' is 100% Illegal, have I done it before? YES, did it save my life? YES--lady behind me was coming up WAY to fast​and didn't see me." - Reduxalicious, YouTube

18. "It pisses me off when I'm in a hurry and someone gets to jump to the front of the line in traffic." That is rich. I consider myself a safe & sensible lane splitter (only when traffic is congested or cars are stopped at a red light) but I regularly have drivers who obviously see/hear me coming and then tighten up the gap, making it difficult/impossible to get through. The same f*cked up sensibility appears to be at work: IF I CAN'T GO THEN WHY SHOULD YOU BE ABLE TO? Here's an idea, MontegoMan562: Instead of blithely driving along & zoning out, take a little responsibility behind the wheel. Pay attention (i.e., head check before switching lanes), communicate your intentions (i.e., use your turn signals), and in general drive defensively. You'll find driving more stimulating & engaging and the rest of the driving/riding public can worry about one less anonymous driver- one who is so wrapped up in himself/herself that it causes them distress to see someone actually making progress through traffic and having a good time doing it." - pushover69, Jalopnik

20. "I lanesplit/filter every day, and, seeing this video, i couldn't agree more. We do drive a dangerous vehicle and need every chance possible to make it safer. Lanespliting/filtering not only is more economical, it also gives you some extra space/field of view if u ever need to react to something." - mbit1997, Reddit

21. "At 5:00 they discuss how it is their fault if someone is not paying attention and swerves into them while they are splitting. It is on them.... except for the mental trauma experienced of KILLING SOMEONE because they were driving 3 inches between two cars. In some cases it might be safe, in many it is not. Put it this way. In upstate maine where I travel quite frequently, one could drive 120 mph and not see any cars for 30 minutes. then why would there be speed limits on any road. I can drive safely at fast speeds in the right conditions.... it sounds idiotic when you put it that way. Just because it is occasionally safe doesnt mean it should be legal." - UnalteredTruth, Jalopnik

24. "Riding a motorcycle, there is only one rule in​my book. Being proactive than reactive, always. Anticipate than react. 110% concentration. That's it. And God help us all." - Balafoutre, YouTube

25. "I can't believe the safety Nazis have not posted about how INSANELY DANGEROUS lane splitting is and pointing out that they are not ATGATT. The thread is more than a minute old. Weird." - inthemachine, Reddit