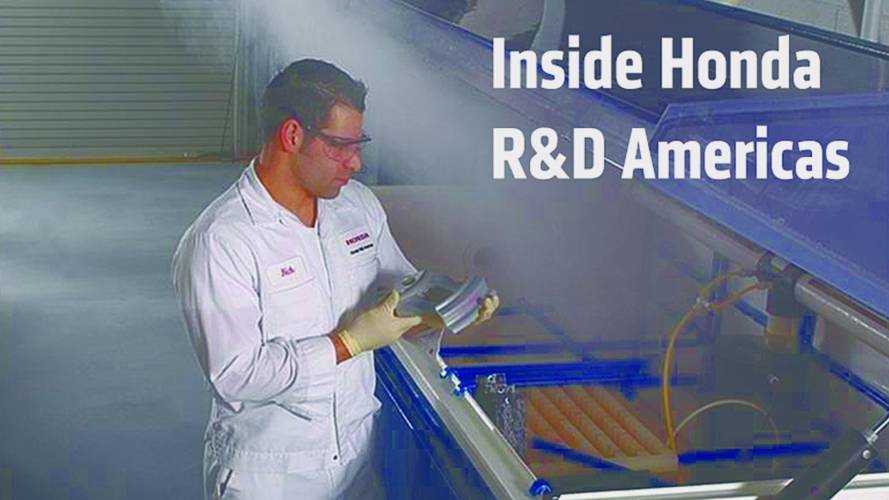 Inside Honda R&D in Marrysville, Ohio to learn more about the technology behind the HRA powersports division.

Tucked among the corn and soybean fields northwest of Columbus, Ohio, is Honda’s million-square-foot research and development facility. The largest of Honda’s 14 R&D facilities in North America, it is populated by more than 2,000 workers, clad in their white uniforms that look like a cross between surgeon’s scrubs and a mechanic’s coveralls. That combination of a surgeon’s high technical skill and a mechanic’s hands-on problem solving seems very appropriate for this place.

Security at Honda R&D Americas (HRA) is similar to that of a nuclear submarine base, so we were very lucky to get a rare behind-the-scenes tour. In fact, some of our guides from Honda’s press department were as excited as we were, because, although some of them were longtime Honda veterans, they had never seen it for themselves.

HRA is adjacent to the Marysville manufacturing facility and develops automotive, powersports (ATV and side-by-side), and power equipment products. Senior Vice President for HRA Katsumi Fujimoto gave a brief introduction, highlighting the importance of the combined facility. “Honda has a tremendous ability, having two functions in one place; this is really rare,” he stated. Indeed, there seemed to be significant crossover between the automotive and powersports research.

Jennifer Dahlgren, Corporate & Technical Communications Senior Coordinator, was our guide and gave us an overview of the facility’s history and capability. “We stared initially just doing some concept design... and we still do a lot of concept and design. We went then into doing some derivative models,” and today they conduct all phases of design and testing. The Pioneer was “the first powersports model developed fully here in the U.S.” Some automotive products that were fully developed here include the Pilot, Element, Ridgeline, Odyssey, and Acura MDX.

“We have a full prototype shop, everything from weld, paint, and assembly,” she noted, to create priceless hand-made test parts and vehicles, which they then systematically break in every possible way.

Also part of the complex is the Transportation Research Center (TRC), a massive proving ground with all manner of tracks, trails, skidpads, and roads for vehicle testing, including a 7.5-mile oval track, which looks like Thor’s slot car set, and a woodland trail where we rode the new Honda Rancher ATV.

“In a nutshell,” Jennifer summed up, “what we do here is complete product creation: everything from initial talking to customers and market research to styling, putting that into physical drawings, physical products, testing those, and verifying.” As the briefing wrapped, we were getting eager to get out and see the facility, since every riding or driving enthusiast is a bit of a nerd for materials, research, and design. Also, who doesn’t love watching people work when they really know what they’re doing?

Our first stop was the main design floor, a room the size of two-and-a-half football fields filled with cubicles where engineers were huddled together over parts, marking on white boards, or modeling designs in Catia (the preferred modeling software of automotive design and architect Frank Gehry). I was struck by how quiet this giant room full of people hard at work was. There was an air of earnest collaboration, and even Jennifer spoke in hushed tones. Mr. Fujimoto’s cubicle was in this room – no different from all the others.

The first labs we visited were the Materials Research Group, which serves both the automotive and powersports divisions, and where the closest thing to pure science is going on. They investigate physical properties of metals, organics (plastics, rubber, etc.), chemicals, and advanced materials (they weren’t too specific on this, but presumably unobtainium and adamantium) under a variety of conditions. This is where some of that crossover happens; for example, their ATV fenders come from material developed for auto bumpers. They are also working on material processes, such as applying printed films, like camouflage patterns, onto body parts by floating the film in a bath and dipping the part, like the world’s baddest Easter eggs.

Other materials testing labs include salt spray tests, paint chemistry and application, and fatigue and impact testing. They did not let us try out their scanning electron microscope.

At safety and crash testing, they recreate every imaginable type of impact and accident. They typically run about one full vehicle crash per day, which may be a side impact, pedestrian simulation, or a crash into their 200,000-pound concrete barrier. I love when sophisticated engineering and raw, massive, brute force come together. The production of a new model may require more than 100 full vehicle crash tests. In addition to full-vehicle tests, they conduct many tests of partial vehicle mock-ups which are mounted to a massive sled, which is power by a 45,000-hp hydraulic piston. The mechanism reminded me of the steam catapults on an aircraft carrier. I’m guessing it’s nearly as loud.

Next to the crash track is a room with a platoon of dummies designed for different crashes, rigged with countless accelerometers, sensors, and data collectors. Each one may have 50-75 data channels and cost from $100,00 - $200,000. My favorite thing about the dummies was that the males all wore black oxford dress shoes – their only article of clothing.

A lot of testing is endless repetition. We saw a Rancher ATV undergoing relentless back-and-forth turning of its handlebars by a robotic arm to discover possible wear points. This was in a room that could be cooled down to -50 degrees. In an anechoic (no echo) chamber was an ATV frame suspended in the room and being subtly vibrated by tiny pistons to measure how the vibrations propagate through the frame. We saw a Pioneer in the durability tester, where hydraulic pistons supporting the wheels mimic the repetitive impact of rough off-roading. We saw a tall room with a concrete floor where they drop ATVs from various positions. (Some of these tests I suspect they do just because they can.)

Perhaps most intriguing was what we didn’t see. They cleaned up a lot of their project work before our visit. So when we saw a Rancher in a test lab that was set up as a demonstration, it was probably there because they are really working on the new hoverboard (oh... I probably shouldn’t have said that) or, um, something. There were a lot of vehicles and partial vehicles around that were temptingly, teasingly under gray shrouds.

Behind everything we ride or drive are countless teams of engineers and designers who work for years before we see the new product, and these engineers never get to talk about what they do. Their excitement about problem-solving and advancing their art typically has to stay within the small circle of their immediate colleagues. Think about how sophisticated and modern car, bike, or ATV is, and how much has gone into increasing the performance, safety, reliability, styling, and usability of these machines. Our hosts repeatedly mentioned how delighted they were at the rare opportunity to share their work. For me, meeting people who are passionate and highly-skilled at what they do was the greatest treat of this afternoon.