Year Close: The Best Motorcycles Of 2013 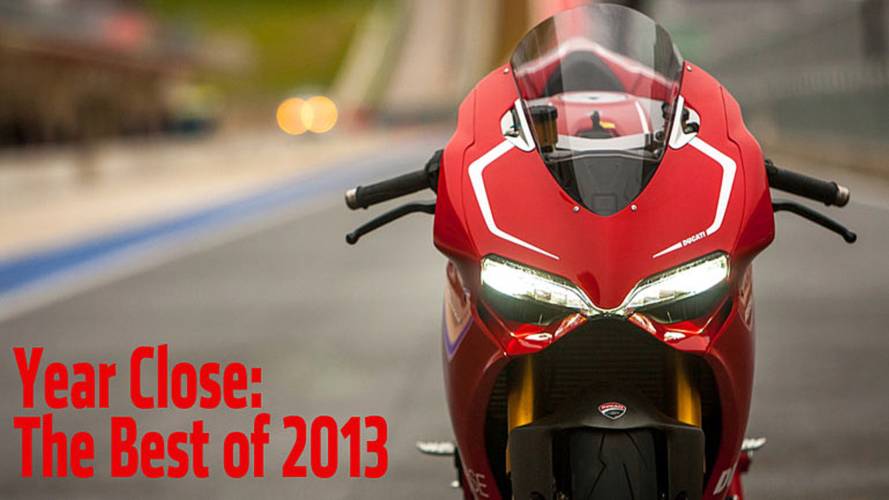 We've chosen the new bikes we've ridden this year, that are available to buy right now, that we think represent the best motorcycles of 2013.

With the fall bike shows upon us — starting with the AIMExpo this week, check back for complete coverage — 2014's new crop of motorcycles are slowly being revealed. So it's a good time to look back at why 2013 has been a bumper year for bikes.

Every manufacturer uses model years a little differently, so we've chosen the new bikes we've ridden this year, that are available to buy right now, that we think represent the best of 2013. Don't see a bike you think should be included? Tell us why in the comments.

Mission set out to take full advantage of 21st century technology to reinvent the performance motorcycle and has absolutely succeeded in doing that. That’s not to say it can’t be done better and won’t be in the future, but as it stands, this bike is faster in real world riding than anything else out there, delivers superior feel and control and does that in a package that’s just as emotionally compelling as a gas superbike, in a totally new way. Internal combustion is now outdated. Don’t believe us? Conversion rate from test ride to sale stands at 97 percent.

What do you want out of this whole motorcycle riding thing? Bragging rights? Flashy graphics and fancy components? Speeding tickets? A literal pain in the butt? Instead of that, what about a bike that’s insanely good fun at legal speeds? One that’s all-day comfortable, one that you can afford to buy and afford to run? One that’s as good in traffic as it is on mountain roads?

And here’s the thing about motorcycle riding: it’s a sport, not a purchase. It’s something you have to work hard at getting good at. The CBR500R, CB500F and CB500X are all perfect tools to develop the skills that you’ll need to ride something faster. They’ll help you learn about brakes, handling and power, all while providing you with a comfortable, confident, practical, economical form of transportation.

It’s not just n00bs who’ll find something to love in the 500s. Experienced riders will appreciate the cost and the fuel economy, of course, but will be surprised by the handling and performance and fun, too. It’d make a great commuter or just a great economical all-rounder for when the fancy bike needs to stay in the garage.

The 500s aren't the fastest, sharpest and probably not the sexiest. What they are, are some of the most accessible, practical, entertaining motorcycles you can buy.

Despite the fueling and suspension issues, the Yamaha FZ-09 is the naked sportbike I want to own. It’s such a complete package, performing well in town, on the freeway or on a good mountain road. While we hope Yamaha addresses the fueling issues on this and most other bikes in their range, adding something like a power commander and swapping the front suspension really isn’t all that difficult and would make this pretty much a perfect package. That’s before you factor in the $7,990 price tag. In an age when value is at the top of everyone’s priority list, the FZ-09 is right on the money.

The Grom won’t be for everyone. It can’t go on the highway, you obviously won’t want to use it for long trips, and it does require a motorcycle license. You’ll know it if you want one and, if you do, the Grom rewards you by exceeding your expectations. It’s silly good fun.

They’ve taken a great bike and made it lighter, narrower, and more powerful. It handles beautifully, is unbelievable amounts of fun to ride, and all while returning decent gas mileage (I averaged 52 mpg the days in and around LA and 48 mpg for my trip to Big Sur and back). The engine is great, the ergonomics are spot on, and, aesthetically, the bike is simply gorgeous.

And, the lists of mosts and bests and whatnot continues: electronics, adjustability, components, nothing on the R is second best, it is the absolute best of everything.

The California 1400 has all the looks, character and presence you could ever want from a cruiser, but rides like a real, 21st century motorcycle. Handling and brakes aren’t just safe, they’re genuinely good, even when compared to performance-oriented motorcycles, but that big V-twin’s rumble and quirkiness still conveys that primal motorcycle experience in an incredibly emotive way.

Star set out to make a Sportster that turned and stopped, was fun and safe to ride at proper speeds and I think they more than met their goal. The real test will be if people in this market think the upgraded performance is worth having the words “Star Bolt” on the side instead of “Harley-Davidson.” Buying a motorcycle isn’t always a purely rational decision, but I think the Bolt hits on enough areas that buyers will have to pause and give it a lot of thought. It should be a nice competitor and will hopefully continue to drive development in this class of motorcycle, something that is good for all of us as consumers. I’m curious to see what adding exhaust and tinkering with the air box and fueling would do, if the results were anything like I got on my Bonneville this thing is going to be amazing.

One of the most uniquely capable, special motorcycles around, the Honda Gold Wing, has been utterly transformed into something even more capable and more special through a series of very basic changes. Cheaper, faster and more fun than the Gold Wing, the F6B makes an incredibly strong argument for itself even before you get to its looks, which have to be some of the boldest, most distinctive there are right now. It’s not just a sports tourer, it’s not just a cruiser, it’s not just a bagger, it’s not just a muscle bike. It’s all those things in a package that has something to offer to virtually any motorcyclist.