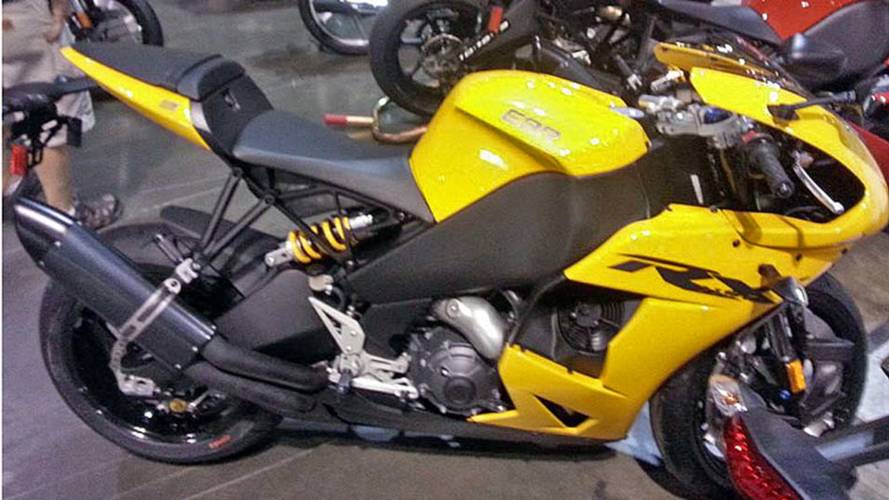 See the first photos of the EBR 1190RX leaked from the floor of the AIMExpo just before its official release.

The AIMExpo begins in Orlando, Florida on Wednesday and we're excited about many of the new bikes we will see and cover on RideApart in the coming days. The first we are going to cover seems to be the new EBR 1190RX, because a user of the Buellxb.com forum has leaked smartphone shots which appear to have been taken from the floor of the AIMExpo where booths are being assembled today.

The EBR 1190RX should be the two-seat, more affordable version of the uber-boutique EBR 1190RS (at 40K each, they've only sold 16.) We don't know what the pricing or specs will look like yet for the 1190RX, but RideApart staffer, Wes Siler just landed in Orlando and will be posting coverage beginning on Wednesday morning. Look for all the official details on the EBR 1190RX to be online soon.

Back to the images at hand... The leaked photos here look like they are definitely from the floor of AIMExpo where the booths are being assembled, so someone has taken a few covert and blurry snaps from behind closed doors and anonymously sent them in to BuellXb. We'll keep digging for more, but what do you think so far?

UPDATE: Another user posted this video, with what looks like an 1190RX sans body work. What a beautiful roar!