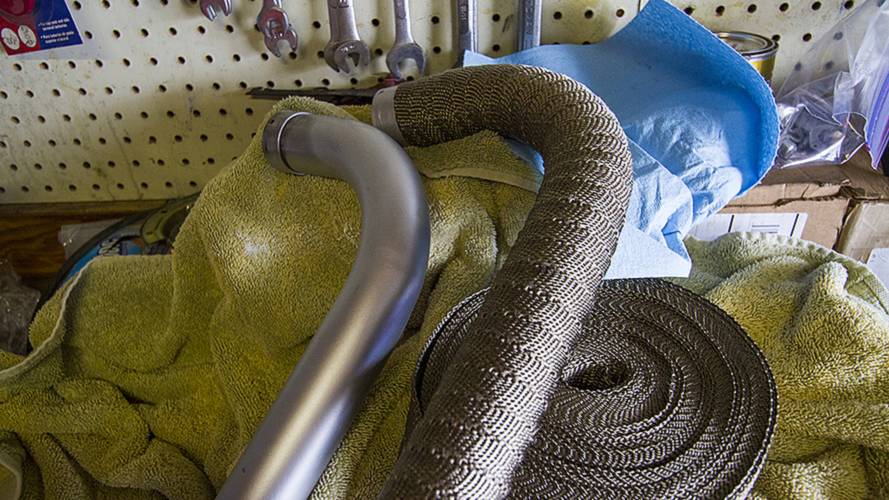 We’re replacing many of the Hipster-level mistakes the former so-called "builders" performed, we have some Hipster upgrades of our own. Enter header wrap!

The Hipster Bike Project is almost running, but we’ve had some editorial catch-up to perform on what we’ve already done to the bike. While we’re replacing many of the Hipster-level mistakes the former so-called "builders" performed, like clubman bars that smacked the gas tank, no muffler, a wire-tied battery box mount- to name a few -we have some Hipster upgrades of our own. Enter header wrap!

We picked up a 1974 Honda 360 as a first bike for my wife, a new learner. A project bike that was complete and running (roughly), but needed some minor attention. Under a budget, we’ve been redoing many elements of the bike to make it reliable and safe. One of the improvements we’re working on is the exhaust, which has been rusted, pitted and overall needed attention.

While header wrap does increase power, it’s minimal. For us the other benefits overshadow any power gain. For instance, heat transfer down into the muffler, not into the engine or the rider’s shins. Also, the look is vastly improved and for cheap.

Well there are plenty of reasons, largely falling into the looks category. But we’re also doing it for the same reason many others before us did, because it’s cheap. Our exhaust has some rusty pits that have eaten away at the pipe in many areas. We could certainly use header paint alone, but instead opted for the wrap look as it fits our casual-scrambler look.

We could simply replace the pipes all together because 360 exhaust is easy to find, but that’s costly and it's hard to find perfect exhaust that isn’t new or refurbished. We could get it re-chromed, but that would involve somehow patching the media work- yeah, Bondo wouldn’t work here, and again, expensive. So wrapping it is.

We took our pipes out of the manifold and to a fine wire brush to our 6-inch cheap-o grinder. This removed all pitted rust marks and any imperfections. Next, we took a left over bottle of Eastwood Hi-Temp Internal exhaust coating, as it works for inner and outer exhaust coating. Not completely sure, but I’d assume water left on the wrap will speed up any rust on the outside of the pipe, so this paint will help deter rust growth. We also painted the inside of the pipe to further encourage heat to travel through the exit of the pipe, not the pipe itself. I love this stuff.

We opted for the 2-inch wide wrap in Volcano, which has a dark, grey-brown color to it. It’s lighter in person than on the Summit Racing site. We purchased ours from PowerSports Place, which is the motorcycle side of Summit Racing, so the link above will take you to Summit Racing because the wrap is the same for bikes or cars.

Our 100ft. is priced at $74.95. There’s no set series of pricing; color, style, sizing and length all play a roll. For a motorcycle I would guess you’d never exceed $150, and at that price, you'd be working on a big four-cylinder.

We also did not include a kit, as we’d figured hose clamps would work. It’s also not a glass composite, which is more common for white/yellow natural colored wrap, as well as that funky red and blue stuff.

Prepping the Wrap: Our Volcano wrap is a Titanium wrap and not a glass fiber wrap like the formerly more common black or white wraps. A glass fiber wrap needs to be soaked in water before you wrap it, the Titanium wrap does not. Don’t know what you have? Well none of this is rocket science. Is your wrap soft like cloth or stiff as a board?

Measuring can be tricky if you have a tight budget. Loosely wrap it around your pipe only once, holding it in place with the tips of your finger. Count for about a 1/4-inch overlap and measure how many loops will cover the pipe completely. If you can, go a little bit long.

Tip: Wrap your exhaust where exposed ends are facing away from the wind. If you wrap with overlaps sticking on top of the material and can be peeled back from the wind while riding, it can cause the material to fray and come apart.

Remember: For us, we were going for the best possible look, but made the silly mistake of starting our wrap too close to the exhaust clamp, which, with our application, did not fit over the wrap and forced us to start over.

Once you’re ready, slightly fold over the very beginning of the wrap. A 1/4-1/2-inch diagonal fold with the end underneath the fold. This will create a neat end spot for the wrap, and again, keep it from fraying. Do at least one complete (i.e. fully covering the material) revolution around the folded section before moving down the pipe.

Now begin your wrapping. We started at about a 1/4-inch. Our first time we used a ruler after literally every wrap. Remember your direction and pull the material at an angle to obtain the proper look. If this is your first time, do like us, and just keep repeating. Laying it where you want, and then pulling it secure helps, but patience is key.

You can decide if you want more overlap for the look and heat protection, but ultimately 1/4-inch is the best for coverage, look, and heat.

For bends, if it is 1/4-inch or tighter, keep the same overlap, but understand that the inside will be much closer.

Once you have completed the wrap, trim off the excess with a clean pair of sharp scissors. Attempt to make it as clean a cut as possible. Fold over each corner, which results in a slightly pointed end.

Plenty of kits simply include the material and locking ties. You can opt for the more discrete locking ties, or go with simple stuff like hose clamps. We chose the latter because it’s a little cheaper, and you can’t see the end under our two-1 pipe cover that’s factory for certain Honda 360s.