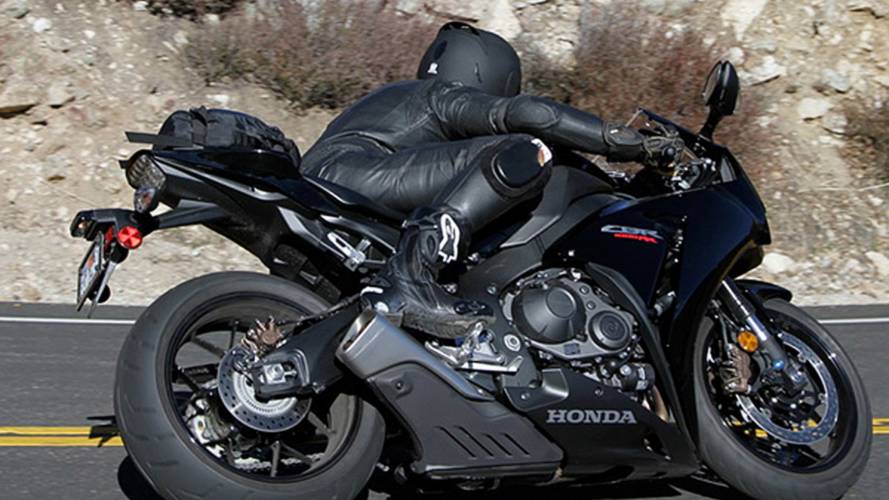 The 2013 Honda CBR1000RR is mechanically identical to the 2012 model, itself a facelift of the version first released in 2008. Unlike most of its superbike competition, it’s not equipped with any electronic rider aids, with the notable exception of optional Combined ABS, and is behind all other liter bikes on horsepower. Can it still compete?

Well, not much. For 2013, the CBR1000RR is available in a new red/white/blue Tricolor or the Orange/Blue/Red Repsol-replica. Plain black and red remain unchanged.

The 2012 facelift sounds minor — new fairings, new suspension, new wheels, revised fueling and brakes — but actually ends up being totally transformative. That suspension is now Showa’s top-drawer stuff; you’ve seen BPF forks on other bikes, but this is the first-ever use of the company’s twin-tube rear shock. Very similar to the Ohlins TTX36 (as fitted to bikes like the $22,995 Ducati 1199 Panigale S), it eliminates the possibility for damping-destroying cavitation, aiding traction as you put the power down out of corners and eclipsing all Japanese rivals on quality.

New clocks are easy-to-read and comprehensive.

Fueling was altered to make the transition from off to on throttle less abrupt. Wheels are new 12-spoke items said to be more “consistently rigid.” Pad changes should make the brakes more progressive while feedback from HRC’s endurance racing has lessened the amount of front brake applied by the rear pedal on the C-ABS model. That change was made after racers asked for the ability to use that rear brake to control power delivery on corner exits.

The rest is fairly standard Japanese liter bike formula. At 175bhp, CBR’s inline-four is less powerful than all other liter bikes, but is actually ahead of the 180bhp Yamaha R1 on power-to-weight; the Honda weighs just 439lbs (wet) to the Yamaha’s 454lbs figure.

Initially, that new suspension feels like it’s going to be too soft. But with higher quality damping than anything this side of the fanciest Ohlins equipment, the Honda is free to be compliant while also exhibiting exceptional control. The suspension easily absorbs bumps, yet holds a line like something sprung much more stiffly.

Those revised brakes — this is the C-ABS model — are also noteworthy. Power and feel are both huge, with no discernable interruption to either aspect caused by the anti-lock system. We’ve ridden the standard model back to back with C-ABS and the only difference is an incrementally softer lever on the anti-lock equipped bike. Modern ABS is a major boon to even the most highly-skilled rider, allowing the full use of the bike’s massive maximum braking ability in complete safety, every time, in every condition. ABS does not remove any ability to trail the brakes hard on corner entry and the combined braking system, which sees the rear pedal operate a small amount of front brake, is not detectable in use.

The result of all that suspension and brake stuff is truly excellent communication between rider and bike. At all times you’re totally aware of what each component is doing. Communication means confidence means better informed, faster, safer riding everywhere.

Another benefit of the new shock is easily-accesible adjusters.

The new rear shock is a stand out component, working more effectively than many TC systems at seeking out grip while on the throttle, exiting a corner. We prefer rider assistance electronics on most new bikes, but on the Honda it feels as if no help is necessary, power slides are rare and, when they do occur, are immediately communicated to the rider and easily controlled as a result.

The CBR1000RR excels at fast, sweeping corners where its stability, full mid-range, powerful top-end and shear confidence make it flow down the road with real conviction. On the road, that compliant, controlled suspension is revelatory over all but the roughest surfaces. On the track, you can trail later and power on earlier than on bikes fitted with cheaper components.

C-ABS combined with radial four-piston calipers and 320mm discs are some of the most powerful, user-friendly, safest brakes out there. Rain or shine, road or track, they’ll stop you over and over and over.

Ergonomics are a good halfway house between outright performance and road practicality. Your ass is still up, your wrists still low and the pegs still high, but an all-day ride won’t land you in a chiropractor’s office.

The motor never wants for power, whether your flowing through the mid-range or bouncing off the rev-limiter. In the real world, user friendliness is better than just a big number.

Subtly handsome looks combine well with solid colors to create a bike that immediately evokes performance without erring into adolescence.

Despite revisions designed to fix the problem, on/off throttle movements are still abrupt and can upset the bike. Aftermarket fueling control can fix this, but shouldn’t be necessary on a new bike in 2013.

While the CBR transitions between corners rapidly at higher speeds, 1st and 2nd gear corners and very tight transitions at low speed can feel slightly ponderous.

On track at Infineon on an identical bike.

Applying labels like “user friendly,” “comfortable” and “confidence inspiring,” might sound insulting to a superbike, but in reality, those traits are exactly what makes a motorcycle fast. It’s the only Japanese superbike that currently comes with suspension of sufficient quality to facilitate truly fast riding on street or track while also besting its Japanese rivals on practicality. That, combined with Honda build quality, reliability and the huge dealer network makes the CBR1000RR the no-brainer decision if you’re shopping for a superbike made by the big four. Spending up to an Aprilia, BMW or Ducati nets you a fancier badge and advanced electronic rider aids, but only equivalent quality suspension and similar outright performance.