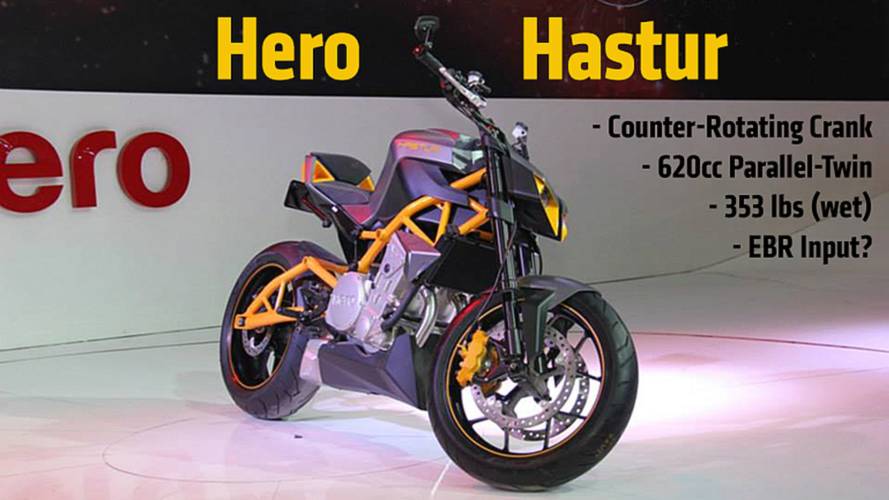 If the new Hero Hastur is a sign of things to come from the MotoCorp, India is poised to become a major player in the world motorcycle market.

In unveiling this new middleweight streetfighter, Hero Motocorp is making a bold statement — no longer will it confine itself to small-capacity, economy-focussed transportation; it is going to tackle the world motorcycle market head-on. The Hero Hastur concept is equipped with an all-new 620cc, liquid-cooled parallel twin complete with advanced technology such as a counter-rotating crankshaft and Controlled Swirl Fuel-Injection.

"We have now successfully developed an ecosystem of technology research and development that is designed to think beyond the obvious and deliver future-ready mobility solutions," stated Hero CEO Pawan Munjal as he pulled the wraps off the bike at the India AutoExpo just a few hours ago. "The all-new 620cc Hastur will likely mark our foray into the superbike segment and showcase the shape of things to come from this ecosystem."

You may be tempted to take Munjal's words lightly, given the basic nature of Hero's current range, but you shouldn't. The New Delhi-based company is the second largest manufacturer of powered two-wheelers in the world, making around 6.9 million bikes a year. Just two years after it separated from long-time partner Honda, it's already entering the American market in conjunction with Erik Buell Racing.

Did EBR have a hand in the Hastur? Well, the 2014 EBR 1190RX also uses that Controlled Swirl Injection and even calls its system by the same, a presumably trademarked name. We also see EBR influence in the direct-action shock and the swingarm designed to facilitate that arrangement. The Hastur could actually be a serious performance motorcycle.

The Hastur is powered by a 620cc, liquid-cooled parallel twin developing 79 bhp at 9,600 rpm and 53 lb.-ft. of torque at 7,750 rpm. So far, so normal, right? You're thinking Ninja 650/CBR650F competitor. But, this thing is over a hundred pounds lighter than those bikes, weighing in at just 353 lbs (wet). Add to that the adjustable suspension front and rear (no details on how adjustable it is), USD forks, radial brakes and Pirelli Diablo Rosso II tires and the Hastur all of a sudden looks pretty serious. Hero says it will reach a top speed of 150 mph; impressive for a mid-capacity naked.

For a first big-bike effort, the Hastur is shockingly complete. Note the braced swingarm and direct-action shock and also the Panigale-style tunnels in the tail.

And that's before we get to the counter-rotating crankshaft, a technology also used by MV Agusta to great effect on its three-cylinder range. It works by canceling out the reciprocating mass of the pistons and crankshaft, restoring feel and speeding steering. To the best of our knowledge, no Japanese bike has used such an arrangement, yet.

As on the EBR 1190RX, the Controlled Swirl Injection boosts combustion efficiency. According to EBR, that technology, "Allows the engine to produce more power, a broader torque band and better fuel economy." There's no economy rating for the still-in-concept-stage Hastur yet, but the 185 bhp 1190RX returns 40 mpg (combined), very impressive given that motor's incredible performance.

The Hastur is bang up-to-date elsewhere too. The Panigale-style tail (with cooling air tunnels) covers a removable subframe for easy crash repair, while the over-square twin and its cartridge 6-speed gearbox are a stressed member in the steel trellis frame. All lights are LED.